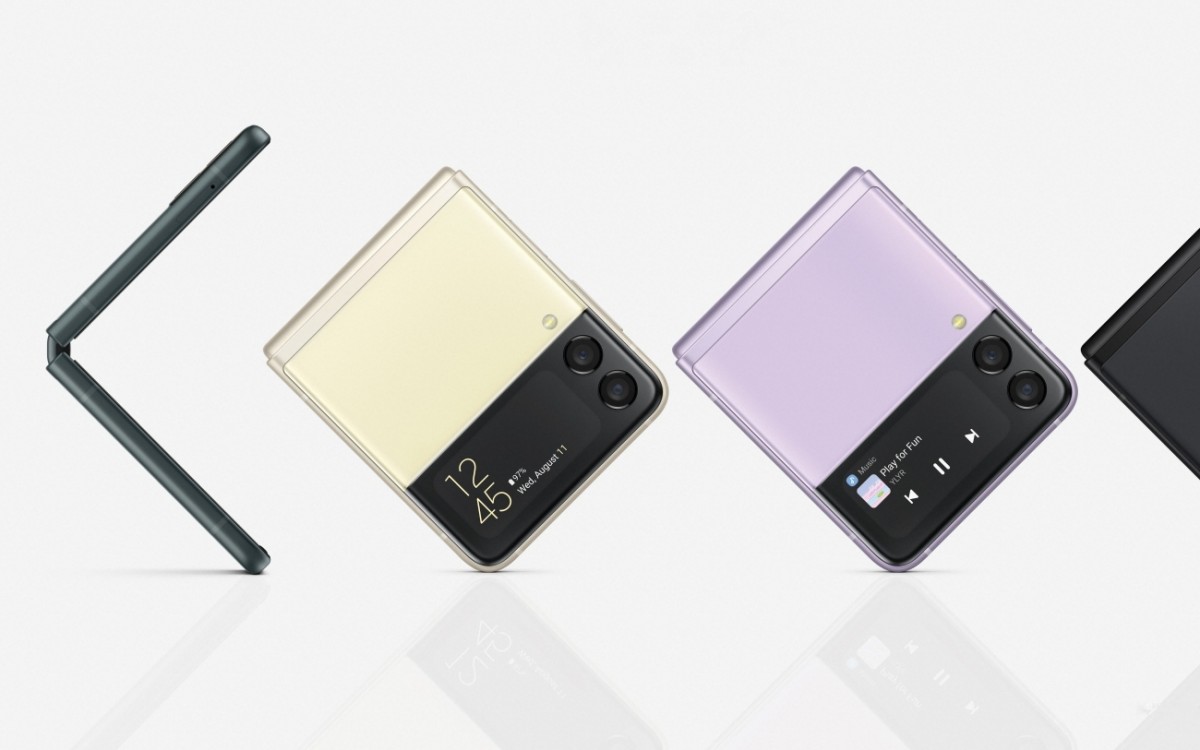 The Samsung Galaxy Z Flip3 clamshell is the second foldable phone to debut at today’s unpacked event. It comes with a new design and improvements to both screens, plus an official IPX8 rating for water resistance, much like the Galaxy Z Fold3 that shared the stage with it.

For starters, the Flip3 has a much larger cover display – 1.9” Super AMOLED with a 260×512 resolution. That enables easier checking and interaction with notifications and support for more apps without opening the phone.

The big foldable panel on the inside has also slightly improved – it remains a 6.7” Dynamic AMOLED with Full HD+ resolution but now has a 120Hz adaptive refresh rate.

The dual camera next to the cover screen is now lined up vertically, with the LED flash below them in the differently colored part of the panel. The dual shooter includes a 12MP f/1.8 main camera with 1.4µm pixels, Dual Pixel AF and OIS, as well a 12MP f/2.2 ultra-wide-angle cam, which means it’s identical to what the Galaxy Flip and Flip 5G had.

There’s a third camera nested inside a punch hole on the main display, and that one is also carried over from last year’s models – 10MP sensor behind f/2.4 lens. Arguably the most notable upgrade in terms of photography has nothing to do with the cameras themselves. Instead, the larger cover display will make it easier to shoot selfies with the main camera.

On the inside of the Samsung Galaxy Z Flip3 is a 5nm Snapdragon 888 chipset with 8GB of RAM and 128GB or 256GB of speedy UFS 3.1 storage. The phone supports both Sub6 and mmWave 5G, although we are yet to see if every version will have them or some markets will miss on the mmWave.

The Z Flip3 comes with Corning Gorilla Glass Victus on its exterior and Armor Aluminum frame, just like its Fold sibling. Samsung made the phone 1.3mm shorter, 1.4mm narrower, and 0.3mm thinner than its predecessor, while the weight is unchanged at 183g.

Samsung decided to keep the battery capacity unchanged at 3,300 mAh battery as in the first two clamshells from the Galaxy family. Inexcusably however it also retained the 15W charging, which is really disappointing on a €1,000+ phone in 2021.

The Galaxy Z Flip3 is a fashion accessory as much as it is a smartphone. That’s why Samsung will offer it in no less than seven colors – Cream, Green, Lavender, Phantom Black, Gray, White, and Pink. Keep in mind that the latter three will be exclusive to Samsung.com.

There is also a line of colorful cases with metal rings or leather straps that act as holders for better device handling. They are seven in total and will be sold separately.