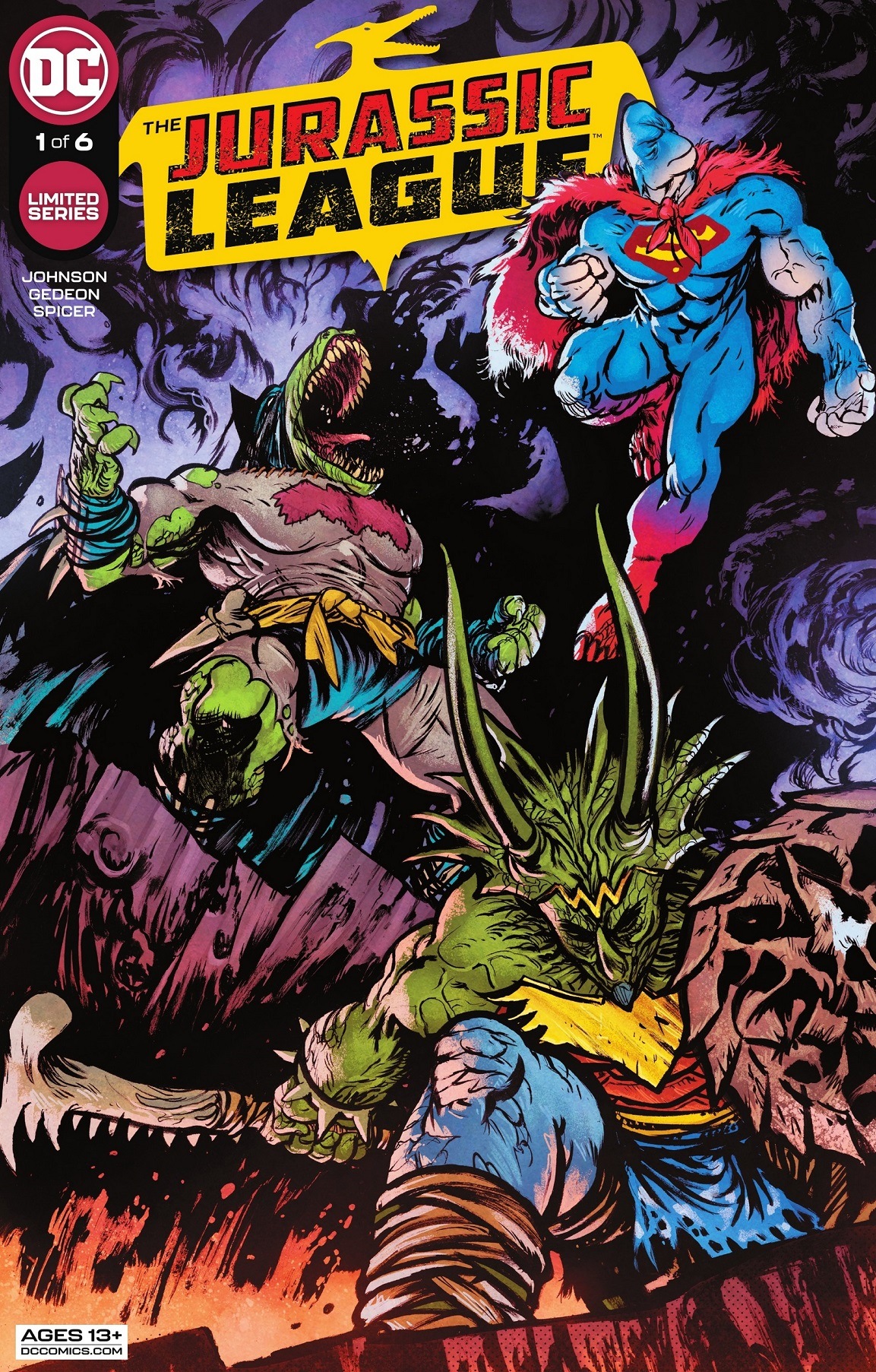 Welcome to my comic book review round-up for the week of May 11, 2022. I will be covering The Jurassic League Issue 1, Love and War Issue 2, Grim Issue 1, and more.

I have to begin by talking about The Jurassic League issue 1 because what the heck? All the praise to writers Juan Gedeon & Daniel Warren Johnson for handling a really out-of-the-box premise that involves the members of the Justice League being dinosaurs! I want more comics like this, please!

The debut issue does an awesome job of quickly introducing a bunch of iconic characters and how they all fit into such a fictional world. I was not expecting humans to exist alongside such dinos, but I’m here for it. Also, the panel showing a baby dino-Batman crying over his dead parents took me out.

The entire thing is absurd but in an incredibly fun way. There’s a lot of humor, action, and interesting character designs (art by Gedeon and colors by Mike Spicer). So, of course, I’m looking forward to more. Also, kudos to letterer Ferran Delgado for really helping each panel come alive with a lot of dynamic lettering.

Recommendation: PICK IT UP!

From writer Tom Taylor, Superman: Son of Kal-El issue 11 didn’t waste time with any unnecessary relationship drama between Jon and Jay. Even though Batman told Jon he couldn’t trust Jay, it made sense for our young Superman to make sure by talking to Jay himself.

Frankly, that was the only thing I enjoyed about this particular issue. The rest of the stuff was ‘Meh!’. We did get some plot progression with Jon realizing how Bendis was controlling his superpowered minions. Also, I think that Bruce should have known about Alfred having quite a lot of contact with the Kents over the years.

Recommendation: Up to you.

From writer Mat Groom, Mighty Morphin issue 19 continued to jump between the two Ranger teams to share what’s happening on Earth and in space. With the space stuff being more light-hearted, King Aradon’s invasion of Earth made for some interesting emotional moments. I liked how Groom handled Zordon coming to the realization that his old ways might need to change.

The current arc giving Rocky’s family some spotlight allowed for the Red Ranger to make an important decision. As far as my opinion goes, Rocky made the right choice to go and help the Green Ranger against Aradon’s forces. There’s no need to prioritize maintaining a secret identity when the entire world’s in danger. One can deal with the identity-related fallout later if need be.

Coming to the stuff happening in space, with the Rangers trying to procure an Eltarian Outpost, the heist-vibe was enjoyable, with every Ranger being given a particular job to do. Alpha’s disguise was the clear standout.

However, having said that, here’s to hoping the Rangers return to Earth soon. I don’t know about you, but I feel dragging out their latest space adventure, just to have the Green and Red Rangers continue to be alone on Earth, can turn boring quite quickly.

The debut issue of Eight Billion Genies really went all-in when it came to introducing the cast of characters and the predicament they’re surrounded by. From writer Charles Soule and artist Ryan Browne, Eight Billion Genies shows every person on Earth getting their own wish-granting genie, with no explanation (yet). However, the catch is that you only get to make one wish. Also, your intention plays a role in determining how the wish plays out.

Of course, a whole lot of wishes don’t function the way people wanted and chaos erupts around the planet. I don’t want to spoil how our cast remains safe, for the time being, but I’m so here for whatever Soule and Browne have planned.

Recommendation: PICK IT UP!

I picked up Grim issue 1 because I liked writer Stephanie Phillip’s work on the Harley Quinn solo series. And now having read the debut issue, I’m looking forward to seeing what happens next with our lead character Jessica Harrow. As one of the Reapers, the issue opened with Jessica ferrying a man down the River Styx. However, her passenger’s not ready to accept death and decides to run away.

There are definitely seeds for some interesting world-building here. And things take a wrong turn for Jessica at the end. While I enjoyed reading Grim issue 1, I think certain readers might feel it is a bit similar to Bleach, with Jessica even resembling Rukia Kuchiki. So, let’s see what Phillips has planned when it comes to fleshing out such a fictional world and making Grim its own thing.

From writer Tom Taylor, Seven Secrets issue 17 picked up from the devasting cliffhanger in the previous issue. We got a bunch of reveals, however, one of them was more than expected. And while Taylor still managed to add some humor during a very tough time for our heroes, a majority of the latest issue felt like filler before the upcoming grand finale.

From writer Scott Snyder and artist Tony S. Daniel, Nocterra issue 10 finally allowed our heroic groups (and Bill) to infiltrate Luna. I knew something bad (and awesome!) was going to happen the moment the comic book showed Luna being surrounded by infected whales. And of course, Piper didn’t follow the order to stay behind.

While a whole lot of talking in Nocterra issue 10 might feel a bit boring to some, I think all of that dialogue, and Piper’s narration, was needed to showcase the current emotional states of the main group. The upcoming issue is going to be so much fun!

The Ocean Will Take Us Issue 2

From writer Rich Douek, The Ocean Will Take Us issue 2 had our protagonists trying to figure out what the school’s swim team was doping itself with. I enjoyed the interactions between our young sleuths as they tried to break into Trent’s locker. Elizabeth got a rude awakening when it came to what her boyfriend Trent was involved in. I also liked how these young characters were smart, or at least tried to be. And like high school students, they were also scared about what they had just witnessed.

I’m looking forward to seeing how they will support each other through such a dangerous ordeal because they are basically trapped in an area full of shady adults. As far as my opinion goes, I think we’re dealing with two groups. There’s a cult that worships the supernatural underwater creature while the other group wants to capture the creature for scientific purposes. I could be wrong, though. So, let’s see what happens.

Recommendation: Pick it up!

I was provided with a free digital copy of Love and War issue 2 for review. The opinions I have shared are my own.

The debut issue of Love and War was full of emotion and the second issue wasn’t any different.  From writer Andrew Wheeler, Love and War issue 2 opened with Gabe getting ready for the day at his new school only to hear Domo outside pleading with three other students to let him meet Gabe. I felt sorry for Domo during that particular scene. He’s understandably confused about why Gave was ignoring him in such a manner.

The good news is that Wheeler didn’t make us wait too long for an answer. As the issue came to a close, we got to learn Gabe’s side of the story to explain why he’s been acting a certain way toward Domo. Will these two boys be able to get together by the end? I don’t know. Do I want them to get back together? Hmmm.

I say this because along with the Domo and Gabe relationship drama, Emil seems to have taken an interest in Domo. The two being quite different from each other made for some enjoyable interactions between the duo. That’s why I’m looking forward to seeing how their dynamic will continue to be handled. From what I can tell, being with Domo might help Emil take his attention-seeking personality down a couple of notches. And Emil might encourage Domo to speak his mind more and take up the space he deserves.

With the boys having their own troubles, Jocasta and Nessa really need to talk because Jocasta’s being overly competitive and I don’t want her to get into too much trouble for it because I like her. There has to be a way for her and Domo to work together.

Love and War continues to be an enjoyable queer-inclusive story full of humor, heart, and the type of characters you want good things to happen to.

Recommendation: Pick it up!

Which comic books did you read this week?