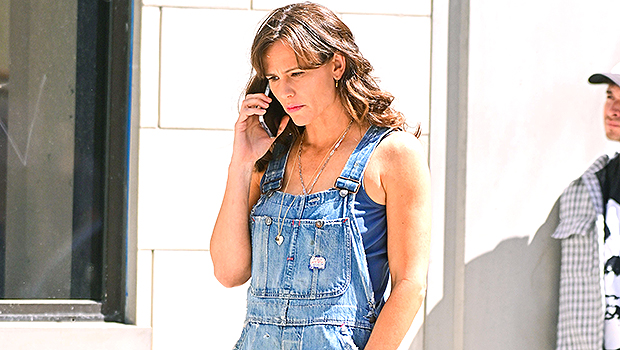 Jennifer Garner is a low-key fashion icon. The 50-year-old actress proved worthy of the title when she was spotted out in a throwback 70s-style ensemble on Wednesday (May 11). While filming the new limited series thriller The Last Thing He Told Me for Apple TV+, Jennifer rocked denim overalls with a navy tank top and big black boots, making her look like she just stepped out of a time machine from 50 years ago… in the best way possible!

With her trademark chestnut tresses left long and loose and just a dab of makeup, Jennifer let her natural beauty take center stage. The overalls and tank allowed the mother of three to show off her gym-toned figure, as her arms looked quite fit. The causal style was topped off with a simple chain necklace and petite earrings, as she chatted on the phone during a break in filming.

Jennifer had a youthful glow about her during the outing, which comes after she celebrated her 50th. The big day included a surprise serenade by the iconic Donny Osmond! Taking to her Instagram on April 15, the Peppermint actress shared a video of a lunch outing with friends where she watched a video on her phone of Donny singing before he sneaks up behind her to gift her a cake and a song!

The 50th birthday surprise comes as Jennifer’s ex Ben Affleck just proposed to Jennifer Lopez. A source EXCLUSIVELY revealed to HollywoodLife that the birthday girl is “completely favorable” to the idea of the two reunited lovers getting hitched! “She acted completely favorable to it and even congratulated them. Jennifer and Ben have been broken up for a very long time and there is no reason whatsoever that she would be upset about this. She is happy if he is sober and he is doing well, both of which he is and both of which are of utmost importance to JLo.”

As for Jennifer being invited to the nuptials, the insider revealed that it is a no-brainer. “She is a part of Ben’s family and there is no reason why she wouldn’t be invited,” the source shared. “Whether or not she will go is up to her. She has gotten rather close with J.Lo and the two of them are on speaking terms for sure. They know that this is important to their children.”

Jennifer Garner’s Husbands: Everything To Know About Her 2 Previous Marriages