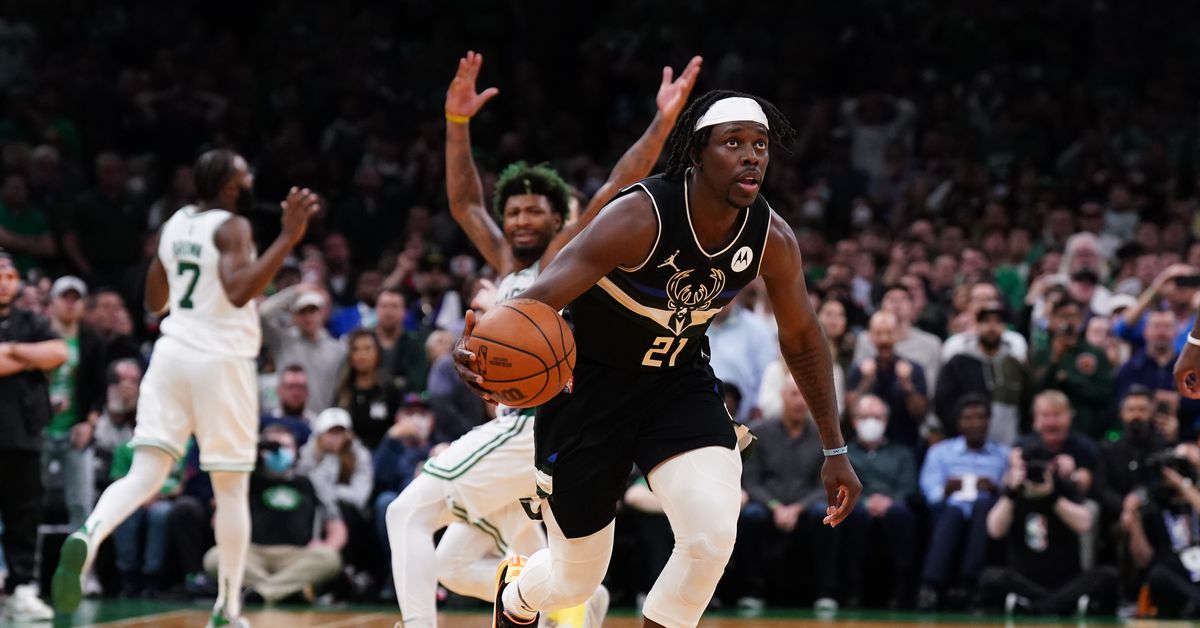 The Milwaukee Bucks and Boston Celtics are each capable of winning the championship this season. Anyone invested in their second round series in the 2022 NBA Playoffs intuitively understands this. The Celtics have been the hottest team in league since Feb. powered by a historically good defense. The Bucks’ core proved itself by winning last year’s title. It feels wrong that one of these teams will see their season end in the second round, but it only helps make this matchup feel even more seismic.

This was already the most compelling series of the second round even before Game 5, which historically feels like the most meaningful game of any playoff series — at least before Game 7. When a series is tied 2-2 in the NBA playoffs, the team that wins Game 5 wins the series 83 percent of the time. With the series set to return to Milwaukee for Game 6, there’s was no denying that Wednesday night’s matchup was going to be monumental.

Bucks-Celtics Game 5 didn’t just deliver on the hype — it gave us an instant classic that may end up being remembered for years to come. Milwaukee’s 110-107 victory to take a decisive 3-2 series lead featured everything that a great playoff game should have, plus so much more.

The Celtics led by 14 points in the fourth quarter. Milwaukee had not held the lead since early in the second quarter, and just didn’t seem to have enough offensive firepower to win the game. Every moment of the fourth quarter felt frozen in time, but somehow the defending champion Bucks made more plays down the stretch to get it done.

This game could be a tipping point for the Giannis Era

Giannis Antetokounmpo stamped himself as the best player in the world during his run to the championship in 2021. Antetokounmpo suffered a scary knee injury in Game 4 of the Eastern Conference Finals, but returned for the NBA Finals, and dragged his team out of an 0-2 series hole to win the championship. In the Bucks’ title-clinching Game 6 victory, Antetokounmpo put up 50 points, 14 rebounds, and five blocks while conquering his personal demons from the free throw line by going 17-of-19 on the night. When it was over, he hit the drive-through at a fast food place with the Larry O’Brien Trophy.

Giannis already had two MVPs and a Defensive Player of the Year trophy to his name before last season, but watching him win a ring felt like it officially cemented him as the best basketball player alive. This really feels like Giannis’ league right now, but the margin error is small for even the all-time greats.

Boston is absolutely capable of knocking out the Bucks — especially with Milwaukee missing one of its ‘big three’ with Khris Middleton sidelined by a knee injury. The Celtics can certainly still win this series, and it wouldn’t be a surprise at all to see them win the title. But given how important it has been historically to win Game 5, it certainly feels like the Bucks are now in control.

The Celtics could have put a major dent into the idea of this being The Giannis Era by winning Game 5. They had the game in their hand. Somehow, the Bucks pulled off the comeback, with the best player on Earth finishing with 40 points and 11 rebounds in the win.

The Celtics have felt like the better team throughout this series, but there’s no denying Giannis is the best player on the floor. At this point, it’s starting to feel like winning a championship means going through Giannis.

Jrue Holiday made 2 super human plays to clinch the win

Holiday always felt like one of the more under-appreciated stars of his generation before last season. He’s arguably the best defensive guard of this era, and he’s also capable of going off for 20 or 25 points on any given night. Holiday made some gigantic plays to key the Bucks’ title run last year, and now he has another shining moment for his legacy.

With the Celtics trailing by one and inbounding the ball with 11 seconds left, Marcus Smart received the inbounds pass and turned the corner looking for the go-ahead layup. He would have had it if not for Holiday, who darted to block the shot from behind and somehow keep it inbounds before throwing it off Smart to make it Bucks ball. This really is an all-timer.

After the Bucks made a pair of free throws to extend the lead to three points, Smart received the inbounds pass and pushed the ball up the floor. Holiday was there to greet him and steal the ball to cement the win for Milwaukee.

That’s a legendary way to win a massive game. What Holiday did was legitimately historic.

Jrue Holiday is the first player over the last 25 postseasons to record a block and a steal inside the final 10 seconds of the 4th quarter of a playoff game. pic.twitter.com/D9Mpu5jr9C

There were so many incredible plays in this game

Holiday’s twin defensive gems will likely be the plays that stand the test of time from this Game 5, but there were so many other game-changing moments.

How about this fourth quarter dunk from Jayson Tatum?

Then there was this ridiculous Al Horford tip dunk to put Boston up six with just over two minutes remaining in regulation.

Giannis was 2-of-16 from three-point range in this series entering Game 5. Usually Giannis threes are tough to stomach for Bucks fans, but after Horford’s tip dunk he hit a huge triple to cut the deficit to three with under two minutes remaining. Holiday followed it up by hitting another tough three to tie the game on the next possession.

Finally, there was the Bobby Portis putback after a missed free throw from Giannis that gave the Bucks’ the lead for good. Milwaukee gashed Boston on the offensive glass all night, and this was the one that really hurt.

Milwaukee won the offensive rebound battle 17-5. The Bucks also shot 6-for-6 from three-point range in the fourth quarter. Again, the margin for error is just so small for both of these teams.

Game 5 will be a turning point either way.

If Milwaukee wins the series — heck, if Milwaukee repeats as champions — we’ll look back at this game as a true turning point. If Boston comes back to win this series — or even the championship — we’ll point to this Game 5 and say the Celtics were able to pick themselves off the floor and rebound after such an emotional loss.

We were lucky to witness that as basketball fans. Game 6 is in Milwaukee on Friday. Don’t miss it.