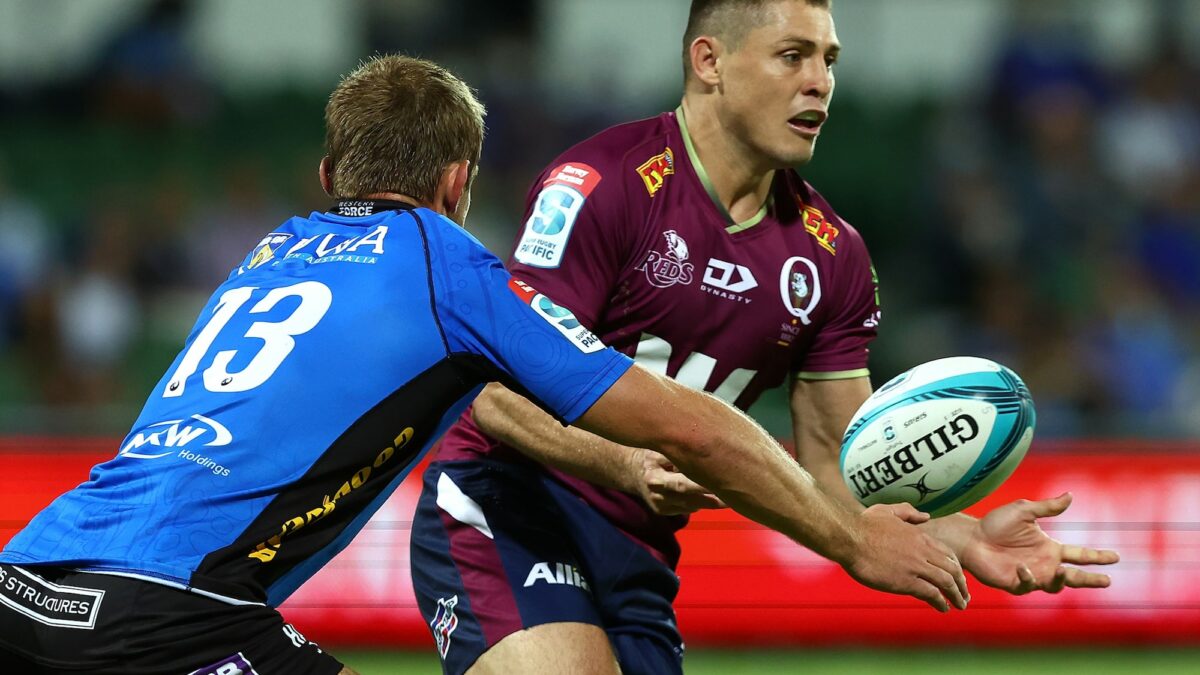 Wallabies No.10 James O’Connor has given the ailing Reds a boost with a return to fitness for their Super Rugby Pacific blockbuster with the Blues on Saturday but the big news on teams night is a massive double blow for the summit chasing Brumbies.

O’Connor has missed the past three losses and captain Tate McDermott was furious at himself and teammates for failing to give adequate support to JOC’s replacement Lawson Creighton.

O’Connor is one of six changes to the Queensland starting XV, with the 31-year-old flyhalf making an early comeback from a knee injury suffered against the Melbourne Rebels in Round 9.

Fellow Wallaby Hunter Paisami also returns to the side after recovering from a shoulder injury and will push to inside-centre after Josh Flook’s strong performance in the number-13 jersey against the Highlanders.

Angus Scott-Young will start at openside flanker with Fraser McReight ruled-out with non-covid related illness, while Connor Vest comes back into the side for his third Super Rugby start.

Angus Blyth returns to the run-on side at look, as does veteran hooker Albert Anae who will start for Queensland for the first time since 2014 with Richie Asiata unavailable.

“The Blues are on top for a reason. They’re a quality side and we are expecting a tough match on Saturday night.

“We’ve lost a couple of close ones in the last few weeks which has been disappointing. We’ll take the learnings out of those games in what will be a tough contest this week,” said Thorn.

Anae will start in the frontrow alongside Feao Fotuaika and Dane Zander, while Blyth will resume his partnership with Ryan Smith in the backrow.

Seru Uru shifts to number-eight to replace Harry Wilson as the backrower continues to recover from concussion, with Scott-Young and Vest starting in the loose forwards.

Waratahs head coach Darren Coleman has named an unchanged backline but added one new face to his forward pack and two Wallabies to his bench to the side that defeated Moana Pasifika at Mt Smart Stadium last weekend for the match against the Hurricanes in Sydney.

After an impressive starting debut against Moana, Archer Holz remains in the starting front-row packing down with Angus Bell and Dave Porecki.

Hugh Sinclair is the only change to the starting side, named in the second row alongside Jed Holloway who leads the competition in lineout wins (52).

Hooper is still sidelined thanks to a concussion two games ago. Wallaby reps Ned Hanigan and Paddy Ryan, who commenced training with the Tahs this week, are on the bench.

Brumbies coach McKellar has made two changes to his starting side to take on the Crusaders, with Brumbies pathways product Tom Hooper coming into the backrow in place of Rob Valetini, and Rodney Iona starting at flyhalf with Noah Lolesio missing.

Lolesio is expected to return next week, with Valetini set for an extended period on the sidelines after suffering a hamstring injury in the Brumbies 38-28 victory over the Chiefs in Hamilton.

Allan Alaalatoa returns to the starting side at tighthead, the Wallabies prop leading the side with Slipper at loosehead and Lachlan Lonergan at hooker.

The second-row combination of Darcy Swain and Cadeyrn Neville is retained from the Brumbies victory in New Zealand, with Hooper the only change to the backrow alongside Jahrome Brown at openside and Pete Samu at number eight.

Nic White will partner Iona in the halves, Iona having steered the side to wins in Lolesio’s absence against the Reds, Force and Fijian Drua.

Irae Simone and Len Ikitau continue their partnership in the centres, with the back-three of Andy Muirhead, Tom Wright and Tom Banks all in good form heading into the top-three fixture.

Head coach Tim Sampson has made three changes to the Force starting XV to take on the Highlanders in Dunedin on Friday night.

Former All Black Jeremy Thrush will move up to the starting lock position to play alongside Wallaby Izack Rodda. The two international players will bring significant experience to the forward pack. Ryan McCauley moves to the reserves.

Scrumhalf Ian Prior will also rejoins the starting line-up after Issak Fines-Leleiwasa was ruled out of selection with a foot injury sustained against the Crusaders. Palmyra Rugby Club player Michael McDonald will join the reserves.

Having successfully completed his HIA protocols, Manasa Mataele will play in the 11 jersey with winger Byron Ralston at 14.

Andrew Ready continues as the starting hooker, with captain Feleti Kaitu’u named on the bench.

Brynard “The Bull” Stander and former All Black and Highlanders player Richard Kahui both come onto the bench. The duo brings over 165 Super Rugby games of experience between them.

Homegrown centre Kyle Godwin will lead the side as run-on captain.

Springboks prop Frans Malherbe joined The Roar rugby experts Brett McKay and Harry Jones to talk about his unusual rugby origin story, what surprised him about the United Rugby Championship coming out of Super Rugby, and Rassie Erasmus’ call for a specialist scrum referee.