The most-spiteful fight on the card has gone the distance, Hass Hamdan defeating Trent Girdham by unanimous decision.

Girdham dominated the opening couple of rounds, and scored the only knockdown of the contest in the first.

But Hamdan, with a red in the face Jeff Fenech bellowing instructions through the six rounds, rallied back – and both men traded huge shots as the bout went on.

Girdham’s corner was furious in the final round, screaming at the referee to disqualify Hamdan for a throw, which resulted in their fighter ending up almost rolling out of the ring.

The pair almost came to blows at yesterday’s weigh-in, and had nothing nice to say about the other in the lead-up – and shared an embrace after the final bell had rang – but not so much when the scores were announced.

A furious Girdham stormed out of the ring while Hamdan tried to reconcile, leading to the winner screaming “F–k you” a couple of times as the two camps then almost came to blows. 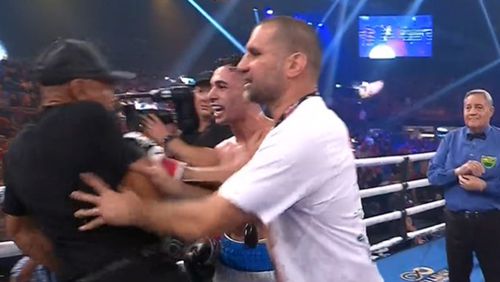