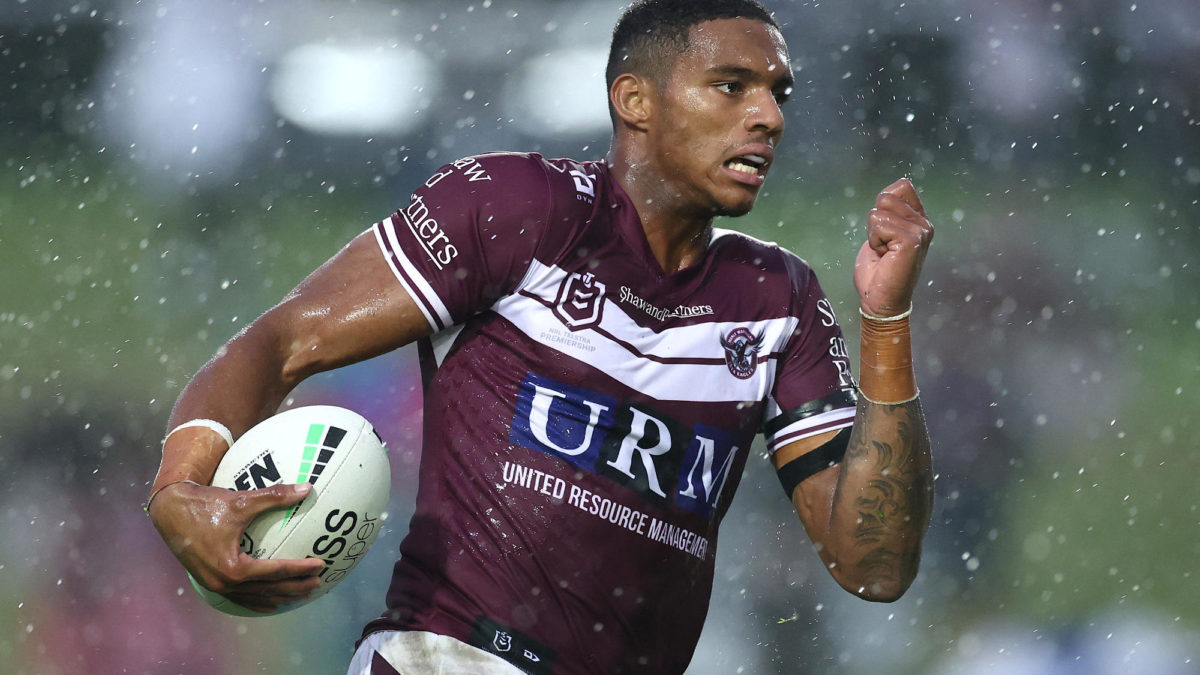 You know how you shouldn’t read anything into NRL trials? Can I interest you in reading too much into trials played in a torrential downpour on the Central Coast?

The first half of the Manly – Raiders game was relatively sedate and normal, until the heavens opened and all hell broke loose.

The commentators spoke of the weather like they’d never seen rain before, which is strange because it’s been raining (Wakefield Trinity Wild)cats and (Canterbury-Bankstown Bull)dogs everywhere where rugby league is popular for about a week now.

Given the deluge, the quality of footy on display was actually good, and the intensity levels a notable step up from last week’s cobweb dustoffathon.

Sure, there was more dropped pill than Bez’s birthday party, but it’s week two of pre-season and Jake Duke was calling for an ark at one point.

Here’s the wettest of takes from Gosford.

Is Manly’s defence their best form of attack?

Manly has added just one player in the offseason, preferring continuity as they seek to tie down the stars they already have rather than invest in new blood.

The headlines before the game were about the speed growing on their right: Jason Saab, already arguably the fastest player in the league, was joined by Tolutau Koula, he of the 10.5sec 100m time.

Both got to demonstrate their pace with runaway tries in the first half, but the story was actually how they got to their long-range efforts in the first place.

Saab took a now-characteristic interception, picking off a pass as the Raiders went for broke in attack, while Koula benefitted from a jarring shot in defence.

That Manly haven’t added much on the personnel side plays into that: everyone already knows where to stand, when to jam and when to slide and, crucially, what their teammates are going to do.

That, in turn, allows for Saab to go for intercepts, and empowers defenders to plant their feet and load their shots.

Manly defenders – especially in the first half – dislodged the ball on numerous occasions and while one expects dropped ball in trial games, it’s usually due to poor attacking lines and combinations, not heavy hits in the tackle.

Defensive organisation is only as good as your ability to execute, however. Manly dropped off severely in that regard in the second half, with one laughably simple try under the sticks for Joseph Tapine.

The Sea Eagles had the worst defence in the top 6 last season – if they have made improvements there, they could be an even bigger threat in 2022.

The Fogarty–Wighton partnership looks decent for the Raiders, but the problem remains outside

You could pinpoint the exact moment at which the Raiders fell apart last year to the second George Williams decided that Australia’s illustrious capital wasn’t a match for Wigan and packed his bags.

He was so important to everything they did, not only because of his organisation and kicking, but also because he did all the stuff that Jack Wighton either doesn’t want to do or isn’t very good at.

Happily for the Raiders, Jamal Fogarty might well be the foil that Wighton needs to fire up again in 2022 if their first outing together is anything to go by.

Wighton scored a trademark try – the sort that he score enough last year – and set up another with a smart kick for Nick Cotric.

The issue might come, however, further out. While everyone raved last week about Xavier Savage, he is still raw, and the combination of Savage with Matt Tomoko, Albert Hopoate, Sebastian Kris and Semi Valemei is a very, very inexperienced backline.

It will improve when Charnze Nicoll-Klokstad returns, but with Jordan Rapana and Jarrod Croker on the slide and the new blood clearly a bit off, Ricky Stuart will have some big calls to make before Round 1.

Trent Robinson’s coaching credentials don’t need explaining here. There’s something that you see in certain very, very successful sports clubs in which it seems like they can rotate out all of their stars and still keep the system intact.

That was what we saw tonight from the Roosters. This was far from a first string – no James Tedesco, Luke Keary, Jared Wharea-Hargreaves or Angus Crichton, to name just a few – but the DNA was exactly the same.

The way that the young Roosters defended their line for long periods, with both guts and guile, was classic Robinson. Playing for each other, not letting standards slip, digging in. Even the guys who are going back to second grade have bought in.

The willingness to put bodies in the way, even in a trial, even in the horrible conditions, was admirable. That shows how deep the culture runs.

As for the guile, that was on full display too: six agains were conceded almost willingly at times on their own line, backing the defence to keep out the Tigers via slowing them down.

Perhaps in a real game, the ref might have acted on it at points in the first half, but in a trial, he didn’t and they got away with it.

The key image from this trial wasn’t anything that happened on the field, it was Robinson, laid back in his chair, calmly talking his soggy and tired Roosters through the game in the sheds after full time. They were hanging off his every word.

Jackson Hastings went alright, but he’s not a miracle worker

It’s always a problem when you put your full team out against an opponent that doesn’t: win and the opposition were depleted; lose and it’s a disaster.

Well, this might not have been a total disaster – it was certainly better than last week – but it wasn’t that encouraging either.

Jackson Hastings was decent enough on his first go, Oliver Gildart got more ball than last week and looked good, while Luciano Leilua showed how destructive he can be.

On the other hand, the Tigers were ponderous for long periods in the first half and when their best XIII was up against the Roosters second string starters, there wasn’t much between the sides.

If you squint, however, there is a dynamic that could well work for the Tigers. Hastings is physical, direct and able to play off the cuff, while Brooks can play the classical halfback role that allows Hastings to be the best version of himself.

When Adam Douehi is back – potentially in the centres – and Oliver Gildart is up to speed, with Daine Laurie chiming in from the back and Luciano Leilua charging around…you can see the Tigers not being the worst team in the NRL.

Michael Maguire might hope that happens sooner rather than later, though: their draw features seven of their first ten away from home and he might not be around to see his boys come good.