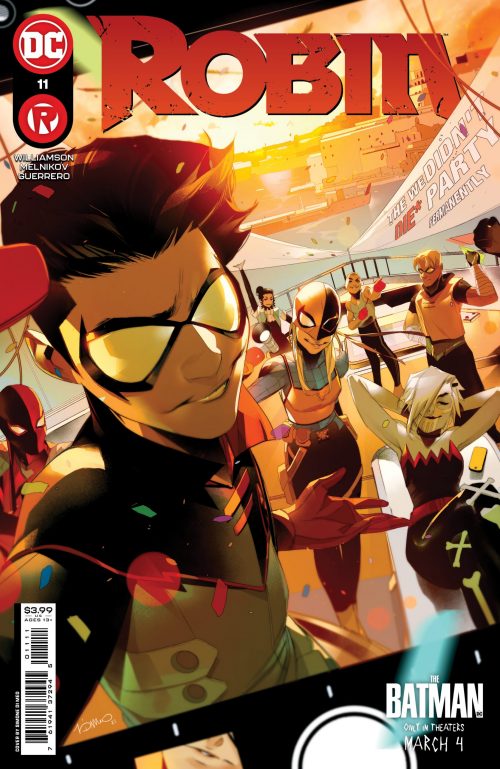 Robin issue 11 concludes the Lazarus Island arc. This has been quite the journey for Damian Wayne. He’s learned a lot about himself and made some friends along the way. But I have a feeling Robin’s adventures are only just beginning!

There will be some spoilers below.

I felt that the conclusion of this story arc was very satisfying and I’m glad that I decided to pick up and stick with the series. The current issue tied up a lot of loose ends, but it still allows for the story threads to continue on. Overall, this has been a fun and epic tale reminiscent of anime like Dragon Ball Z with a poignant personal journey thrown in for Robin and helping to reestablish his proper place in the DC Comics universe.

Robin issue 11 starts with Damian’s grandfather, Ra’s al Ghul and his mother Talia facing off against Mother Soul along with members of the League of Shadows. However, Damian stops them as he has questions from Mother Soul and his mother and grandfather that he wants answers to. Damian doesn’t stick around long after he gets agreement from his family as Master Dusk had fled the scene. Robin sets off with his friends (Flatline, Ravager, Hawke, and Respawn) to track him down.

There are some cute moments between Damian and Flatline. She reveals her real name to him, and he talks to her about why he likes reading manga so much. So much of everything he does comes from his parents, but the manga is something that is his own and it is something that he enjoys. I don’t know if I’m entirely convinced, but it seems like Damian and Flatline make a pretty good pair and I’d love to read more about the two of them in the future.

I really appreciate writer Joshua Williamson putting so much care into Damian as a character. In my personal opinion, some of Damian’s other more recent writers did not care much for the character and have done him some disservice. Williamson definitely has used this solo book as an opportunity to turn things around for the character in an organic way. He didn’t shy away from the issues that were there but wrote a character journey where Damian begins to work through those issues.

Sadly, this is the last Robin issue that Gleb Melnikov had illustrated. He is still working for DC Comics but is also looking to focus on some of his own personal work. I must say though, what an issue to go out on. The art is absolutely gorgeous. I especially love his designs for Talia and Lady Shiva. I’m excited to see whatever project he decides to work on next. And of course, the colors by Luis Guerrero and letters by Troy Peteri are always on point and fit so well with the series.

With Robin issue 11 things really start to wind down. Damian has made some true friends; definitely much better relationships than he had with the Teen Titans. These are people who care about him and want to fight alongside him. That was something that Damian has desperately needed. But that doesn’t mean there isn’t any trouble on the horizon.

Damian is heading back to Gotham with a plan, a plan that may have some dire consequences. I look forward to reading about what adventures Damian will go on next!

Jessica has a BA in music with an emphasis in voice and spends her day typesetting, editing, writing, and moderating webinars. Jessica primarily reviews anime and comic book series. She also offers insights on various movies, books, games, and other geeky topics.