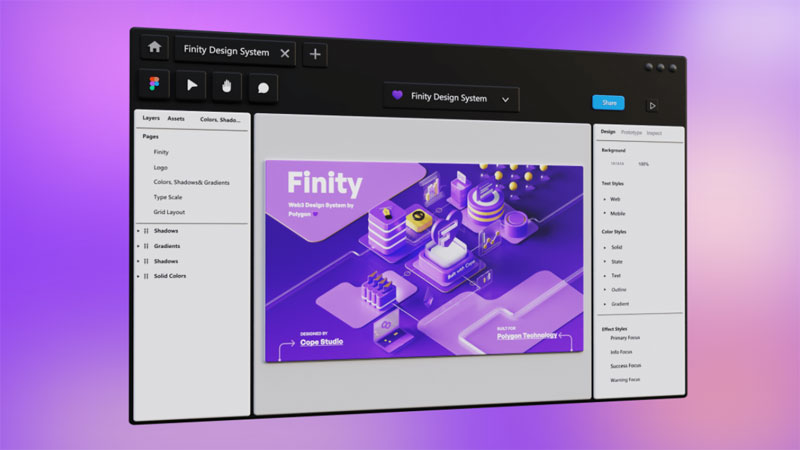 In a bid to assist the developers of web3 distributed applications, the Ethereum scaling solution Polygon today announced the launch of Finity, a user interface design tool aimed at giving the blockchain industry a makeover.

Finity is an open-source, cross-platform design studio that allows developers to construct high-quality interfaces with scalable, modular and customizable elements.

Web3 is an emerging ecosystem of decentralized applications based on blockchain technology. Platforms and apps built using web3 run on peer-to-peer networks and execute according to software-defined smart contracts.

The past two years have seen web3 become a booming market, but mainstream adoption has still been problematic. Polygon believes that much of the reason for that is because the user experience is poor. That’s in part because of the arcane and technical nature of blockchain technology but also because poor UI design is a low priority for developers, who tend to focus their attention on other features.

The tool is designed to give web3 developers what they need to create high-quality user interfaces with beautiful aesthetics and get back to what they do best: developing applications. That means that developers can produce sleek, easy-to-understand dapps, while not sacrificing power and scalability.

The product maintains much of Web 2.0’s visual design language, such as icons, symbols, typography, and similar and provides a similar landscape for developers to choose from. It then guides them using an equally familiar choice of elements such as color palettes, cards, calendars, tooltips, toggle switches, icons, input fields and so on to work with. The end result is users enjoy a continuum of visual experience between Web 2.0 apps and web3 dapps.

Finity is the first product to emerge from Polygon’s acquisition of Cope.Studio, a full-stack development team that creates web3 projects. It also comes shortly after the company raised $450 million in funding led by Sequoia Capital India earlier this month.

“Finity, born from our acquisition of Cope Studio last month, is the latest demonstration of how Polygon is on its way to becoming the AWS for web3,” said Sandeep Nailwal, co-founder of Polygon. “We are providing a multichain approach with a multitude of services and solutions spanning scaling solutions, sidechains, blockchain toolings and now a fully-specced out design hub.”

Polygon has been at the forefront of the explosion of web3 apps and its own ecosystem reached a milestone of over 7,000 dapps deployed on its network as of December, up from only 30 in 2020.

This booming growth in the industry has been putting developers under ever-increasing strain to keep up with creating new functionality and keeping up with user demand. That has often come at the cost of user experience and, as a result, it has been hindering adoption by mainstream audiences.

Finity is now generally available to Polygon developers and they can get started by downloading it from the developer portal.