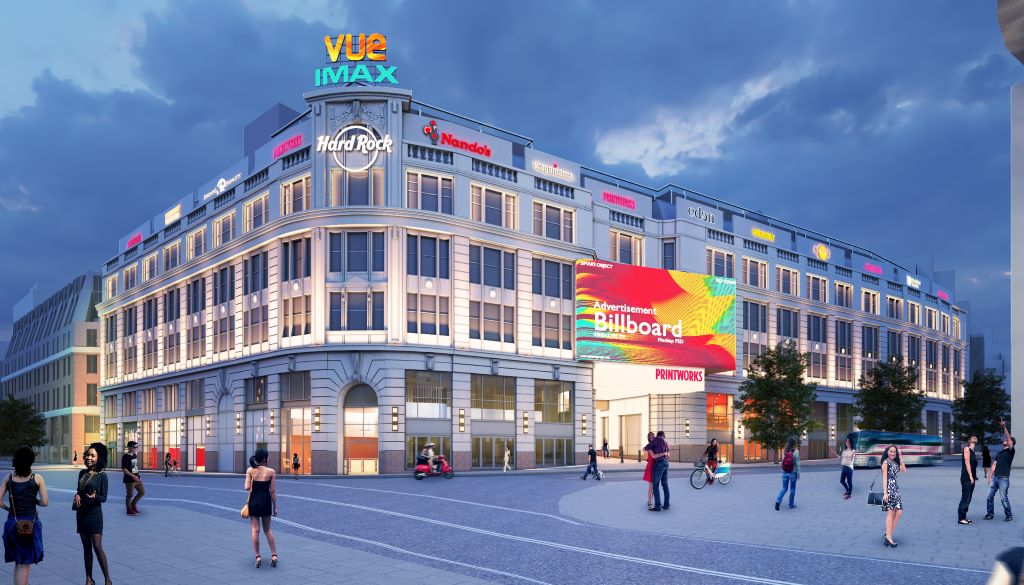 A £22m refurbishment scheme is set to start now in February, with The Printworks remaining fully open and trading throughout the refurbishment.

The 20 year deal with Vue will see a “transformational” £22m refurbishment after cinema chain Vue signed a new 20-year deal.

DTZ Investors bought the site from Land Securities in 2017 for £108m. The Vue development will form a central role in what The Printworks has dubbed its “trajectory towards international recognition as a pioneering round-the-clock entertainment destination”.

Vue already operates a cinema on the site with 23 screens, including Europe’s second largest IMAX theatre, and now the cinema complex is set to undergo this milti-million pound Printworks flagship refurbishment, as well as wider works in the scheme.

This major refit, which received planning consent in February 2020, marks the first major new investment at The Printworks since the entertainment and shopping complex was launched in 1999. This scheme will include a 900m2 digital ceiling, creating a platform for immersive audio-visual performances, which will be Europe’s largest.

“Gamification is at the forefront of Printworks vision”, says DTZ, the theory that the application of game-design elements and game principles in non-game contexts will enhance the customer experience. It can also be defined as a set of activities and processes to solve problems by using or applying the characteristics of game elements which are used to Educate, Entertain and Engage.

The scheme is just one of a bunch of property developments now following a trend. That is, for the big international property agencies such as DTZ and Land Securities to move into direct property investments and developments.

“Printworks has shown resilience through the pandemic and refurbishing this iconic venue remains part of our vision for the asset.

“The leisure sector continues to transition as consumers seek the ultimate experience with technology redefining both expectations and possibilities.

“Consumers at Printworks will soon benefit from just that with a fully immersive and interactive environment on a scale not previously seen in the UK.

“This in turn will drive footfall and provide our tenants with the best opportunity for trade.”

““Printworks has an exciting tenant-mix from day-time family entertainment to the evening and late-night offer and we are delighted to confirm Vue cinema has signed a new long-term commitment to the scheme.

“This, alongside our extensive refurbishment, point toward Printworks remaining a prime destination leisure venue for years to come.”

DTZ Investors is a specialist European real estate fund manager, part of the Cushman & Wakefield Group. The business was established in 1968 in the UK and expanded into continental Europe in 1999.