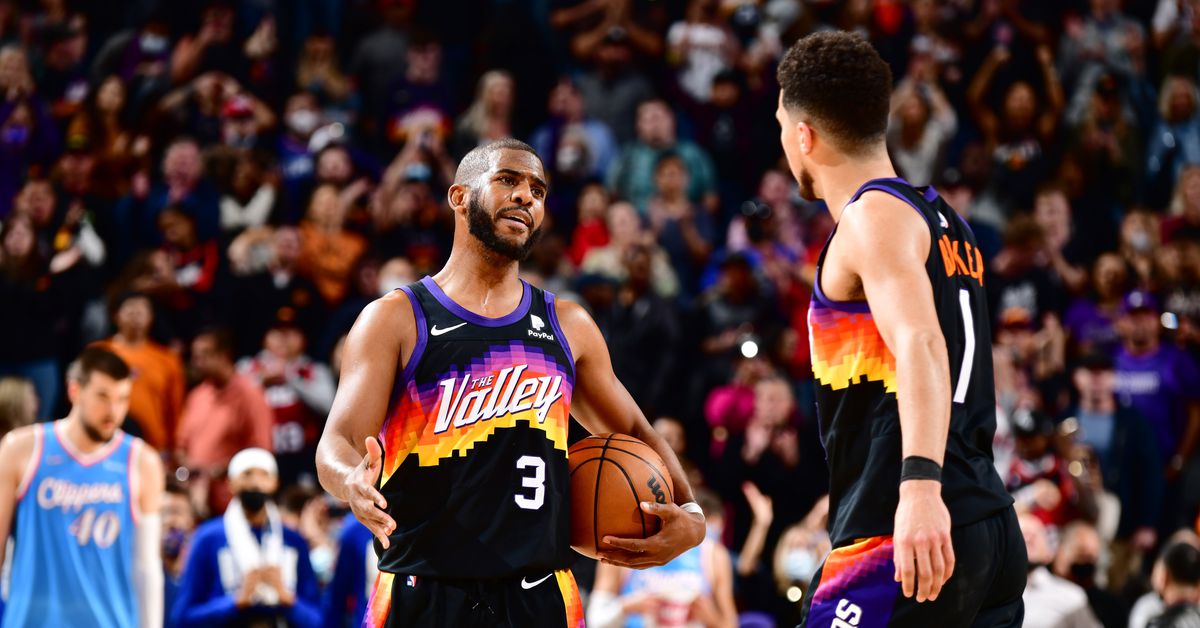 There was nothing remarkable about the Phoenix Suns in clutch situations last year. While Phoenix broke its 10-year playoff drought in dramatic fashion by earning the No. 2 seed in the Western Conference in their first season with Chris Paul, the Suns were still figuring things out at the end of games. Their performance in the clutch — defined as the last five minutes of regulation or overtime with the score within five points — was just about average, with the Suns outscoring opponents by one-point per 100 possessions, a rate that ranked No. 13 in the league.

The Suns would go on to enjoy a charmed run in the playoffs that led them all the way to the NBA Finals, but they actually struggled in close games in the postseason. Phoenix famously blew a 2-0 lead against the Milwaukee Bucks in the Finals, with the Bucks claiming the series by stealing some tight games late defined by brilliant plays like Giannis Antetokounmpo’s block on Deandre Ayton and Jrue Holiday’s steal and lob to his MVP teammate.

Last year’s Suns were excellent, and just two wins away from a championship. This year’s Suns are somehow significantly better. The biggest reason for it is because they’re unstoppable in the clutch.

Phoenix’s game against the Los Angeles Clippers on Tuesday night was something like an immovable force vs. an unstoppable object. While the Clippers have been without Kawhi Leonard the whole year and Paul George for most of it, LA still had nine wins this season when trailing by 13 points or more. They had already erased a big Suns lead earlier in the game and tied the score as the clock ticked to five minutes remaining in the fourth quarter.

That’s when the Suns turned it on.

A Devin Booker offensive rebound immediately led to an open three-pointer from Paul that broke the tie.

The Clippers called a timeout after the shot went in.

The sure sounds like the Suns knew they had the game from there.

Chris Paul said at the timeout with 4:55 left, Devin Booker told the huddle, “Aight, under 5 minutes. Y’all know what time it is.”

Next possession: Jae Crowder gets the steal, dishes it to Paul, who throws a lob to Booker:

Paul threw another alley-oop to Ayton on the ensuing possession. Then he did the scoring himself:

You tell me, which one has a better chance at impacting a play from behind?

Suns know the answer. Flow from a Stack setup to double drag, force the switch, and now CP3 can take his time. pic.twitter.com/kbsjlOcSAy

A corner three from Mikal Bridges — set up CP3, who else? — sealed the win for Phoenix a few possessions later. The Suns had another victory fueled by another flawless performance in the clutch.

Phoenix has been pulling off similar wins all year. The most reliable bet in the NBA this season is this: if the Suns are in a close game late, they’re going to win.

The Suns are historically good in the clutch

Here are a few facts about the Suns’ performance in the clutch this season:

Yes, this is historic dominance from the Suns. This year’s Suns are legitimately the most clutch team ever.

In one of the few close games from Tuesday’s NBA slate, the Suns showed their dominance in clutch time once again.

Their +45.0 net efficiency in clutch time is not only the best in the NBA this season, but is on pace to be the best over the last 25 seasons. pic.twitter.com/4pJgBjc05I

To put it another way:

Suns are now +93 in 80 clutch minutes this season

Why is Phoenix so good in the clutch? It starts with their foundational pick-and-roll game helmed by Paul. CP hunts every advantage in close games, consistently finding ways to draw fouls in the bonus, picking out mismatches he can exploit, and falling back on a reliable mid-range scoring package.

When the ball gets pushed out of CP’s hands without an advantage, Booker can usually take it from there. He’s a three-level scorer who can create his own look out of thin air when there’s nothing else available.

Phoenix also has a great lob target in Ayton and two three-point threats in Crowder and Bridges spacing the floor. With Paul pulling the strings and head coach Monty Williams drilling discipline into this team, the Suns really can’t be stopped when the game is close.

The 2022 Phoenix Suns are something special

The Suns have the best record in the league at 47-10 right now. Dig deepe and the stats are even more impressive:

I’m not sure I’d call the Suns historically elite, but it is pretty crazy that in this tumultuous season they have a 16-0 month (Nov), a 13-1 month (Jan), plus an in-progress 7-1 month.

The Suns aren’t always blowing teams out, but it doesn’t matter: no team is better in close games. The title picture feels wide open around the league right now, but there’s no doubt Phoenix has been the best regular season team. I’d put the Suns as the favorites to win the championship at the moment, though a Finals rematch against Giannis and the Bucks would be a scary proposition.

As the league moves into the playoffs, keep Phoenix’s crunch-time dominance in mind. If it holds in the playoffs, they could have their first championship in franchise history.