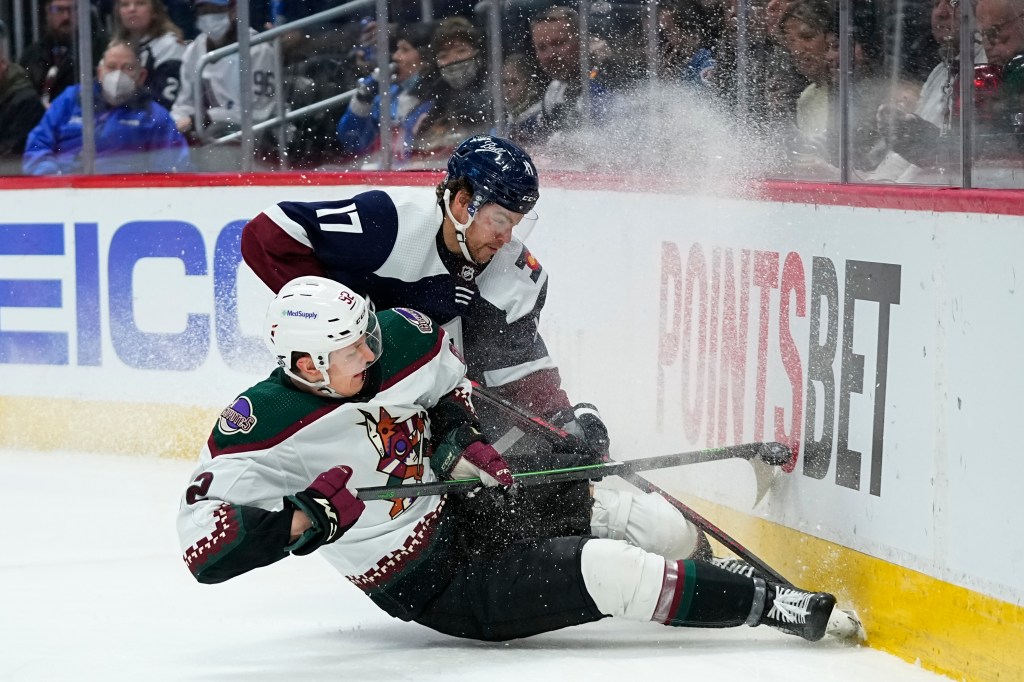 All-Star snub-so-far Nazem Kadri made the play of the game on Friday night. The Avalanche’s leading scorer used a slick move above the goalmouth to score the only goal in the shootout against the rebuilding and shorthanded Arizona Coyotes to extend Colorado’s club-record winning streak to 13 games.

Kadri’s goal and Pavel Francouz’s three saves in the three-round shootout gave the Avs 4-3 victory to begin a consecutive-night, home-and-away set with Arizona. Francouz stopped 23 shots through the 3-on-3 overtime.

Kadri, who entered Friday with an NHL-high 35 assists and 48 points in 30 games, was not selected a Central Division All-Star when 10 of the 11 players were announced on Thursday. He has a chance to become the “last man in” from fan voting.

“It’s kind of a joke, honestly, that he’s not an All-Star,” Avs forward Tyson Jost said of Kadri. “The year he’s having is just incredible. You just look at that shootout move, the patience he has with the puck, and the skill and the poise. It’s pretty outstanding. He does it on a daily basis every night. He’s doing something that’s pretty special at the puck. So I know everybody should vote for him for the last man in because he deserves to be there in Vegas for sure.”

Colorado is the first NHL team to win 13 consecutive home games since the Toronto Maple Leafs in 2018.

“Whenever you’re winning 13 in a row at home, a lot of things are working,” Avs coach Jared Bednar said. “We’re getting the goaltending we need, special teams, power play’s been good over that stretch — with probably the exception over the last couple games when it’s just been OK. Not quite good enough. But 5-on-5, different contributions, different guys, good depth going through the lineup, and the top guys have been playing real well and capitalizing on their chances.”

The Coyotes (8-23-4) came to Denver with a Western Conference-low 19 points and a .279 winning percentage. They were missing goalie Scott Wedgewood and four defensemen to protocol, plus two coaches — including head coach Andre Tourigny, the former Avs assistant under Patrick Roy. They also have four players out with injuries.

The Avs (23-8-3), who also were down four players for various reasons, scored the first two goals of the game, and many probably thought Arizona was already looking towards Saturday’s rematch in Glendale, Ariz. But skilled forward Clayton Keller made an impressive play against top-pair Avalanche defenseman Devon Toews for a shorthanded goal, and the Coyotes were within 2-1.

From then through the end of the second period, the Avs produced plenty of shots, but most right into the chest of goalie Ivan Prosvetov. He had 31 saves on 33 shots through 40 minutes and the score was knotted at 2.

Arizona got the tying goal off the stick of Johan Larsson, who beat Francouz with a wrist shot from the right circle 6:12 into the second period.

Colorado jumped ahead 2-0 on goals from Mikko Rantanen at 4:36 and Jost at 12:03. Both were scored off rebounds from Toews and Kurtis MacDermid, respectively.

MacDermid was partially to blame for giving Arizona a two-minute 5-on-3 power play at 14:06 of the second. In response to Ilya Lyubushkin’s check against the boards on Cale Makar, MacDermid took roughing and unsportsmanlike minors that coincided with a bench minor for too many men. But the struggling Colorado penalty kill (72%, third-worst in the league) killed it off.

The Avs finished 4-for-4 on the kill, including the last one on the closing minutes of regulation.

Footnotes. Avs left wing and team captain Gabe Landeskog missed his third game while in COVID protocol. He tested positive Monday. Bednar said he will travel with the club and likely play on Saturday in Arizona. Colorado’s other scratches were to forward Darren Helm (injured) and defenseman Bo Byram (personal leave). Byram will not travel to Arizona, Bednar said.  … Defenseman Ryan Murray was injured in the game and likely won’t play on Saturday. Bednar said MacDermid will move back to the blueline, his natural position.