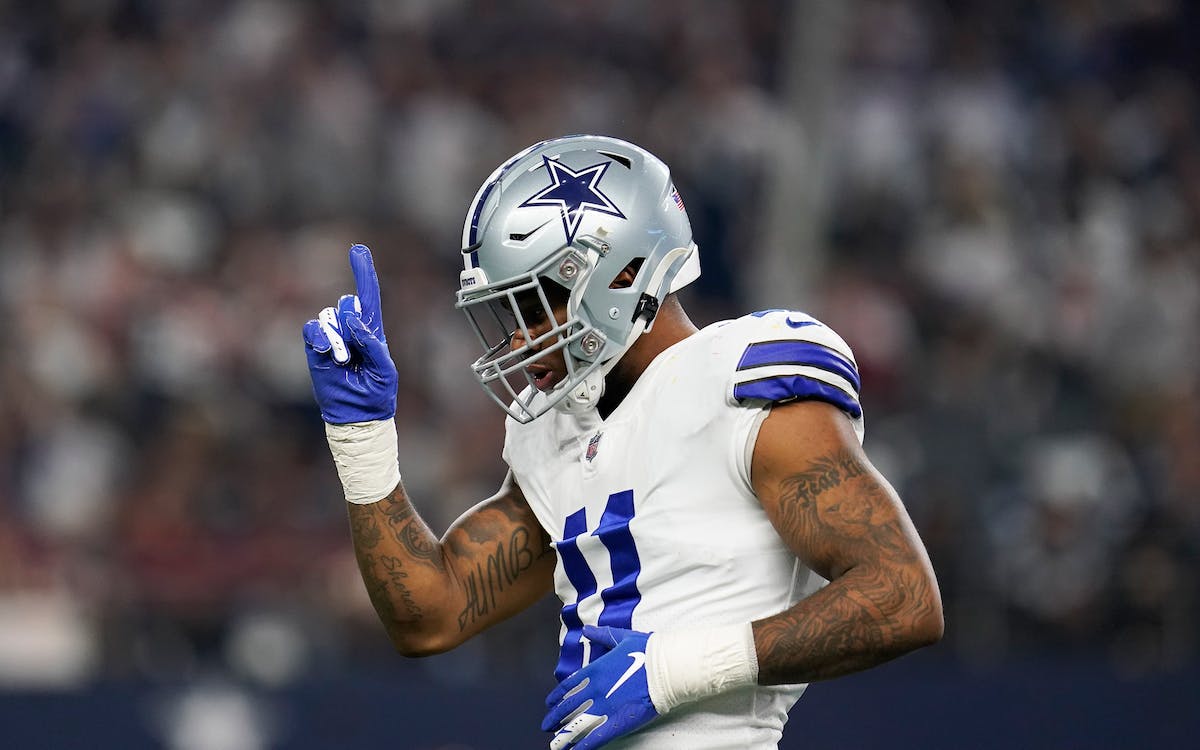 If you’re looking for a reason to believe this season’s Cowboys will fare better in the NFL playoffs than every other Dallas squad that made the postseason in the past quarter century, then Micah Parsons is your answer. The rookie linebacker represents possibilities the Cowboys haven’t had since the days when Troy Aikman, Emmitt Smith, and Michael Irvin romped through the league to deliver three Super Bowls in four years.

That mid-nineties dynasty reintroduced an entire nation to America’s Team and especially to team owner Jerry Jones as the franchise’s erratic architect and master salesman. If the thought of Jerry back on the sideline celebrating a playoff victory and doing his best televangelist impersonation doesn’t get your blood going, then friend, your idea of entertainment is different than mine.

As for Jerry, his playoff juices are starting to flow. “You don’t have but one winner here,” he chortled to Dallas radio station KRLD-FM “The Fan” this week, “and that’s the Super Bowl winner.”

Now, Cowboys fans know that Jerry doesn’t exactly need a reason for that bravado, but Parsons gives him a pretty darn good one. The team’s first-round pick in the 2021 NFL draft has been a huge part of what makes these Cowboys, who face the San Francisco 49ers on Sunday in Arlington, a favorite to advance to a divisional round playoff match, with hopes of reaching the NFC championship game and beyond.

When the Cowboys were winning those Super Bowls, their locker room was dotted with players who, like, Micah Parsons, understood—and thrived—at winning time.

Jimmy Johnson was on the sidelines for two of those Super Bowl runs, and few head coaches were better at preparing teams for the big moments. Mike McCarthy has that role with these Cowboys, and because of a string of questionable decisions regarding strategy and clock management, he—and inconsistent kicker Greg Zuerlein—are the team’s biggest areas of concern in the playoffs.

Now the Cowboys are loaded with players who would have fit right in with those Troy and Emmitt teams. This isn’t to say the current roster is without flaws. The Cowboys led the NFL in penalties, and their run defense is a soft spot. But they have a string of difference makers who can mask those weaknesses with game-breaking plays.

Quarterback Dak Prescott led the NFL’s highest-scoring offense with 37 touchdown passes this season, completing 69 percent of his passes along the way. He had a tough stretch in the back half of the schedule, but finished strong by throwing 12 touchdown passes in the Cowboys’ final three games.

The NFL is a quarterback league, and almost all the best teams are defined by the player under center: Tom Brady and the Tampa Bay Buccaneers, Aaron Rodgers and the Green Bay Packers, Patrick Mahomes and the Kansas City Chiefs, Josh Allen and the Buffalo Bills, and so on.

Dallas’s edge begins with Prescott, but the team’s offense separates itself from other NFL attacks thanks to its wide array of weapons: wide receivers CeeDee Lamb and Amari Cooper and tight end Dalton Schultz each compiled more than 800 receiving yards this season. Running backs Ezekiel Elliott and Tony Pollard combined for 1,721 yards on the ground. Dallas is the first team to have players accrue more than 4,000 passing yards (Prescott), 1,000 rushing yards (Elliott), and 1,000 receiving yards (Lamb) in a season.

If Prescott maintains the level of play he reached in the final three games of the season, the Cowboys have a chance to make the kind of deep playoff run fans have waited decades to see again.

Second-year cornerback Trevon Diggs also figures to be key to Dallas’s postseason hopes. He led the NFL with eleven interceptions, including two that he returned for touchdowns, also tops in the league. Diggs is so good in one-on-one coverage, with a knack for making game-changing plays, that he has inspired comparisons to Hall-of-Fame former Cowboy Deion Sanders. Great cornerbacks can dominate half the field at times, thus freeing up other defenders to double other receivers or add pressure on the quarterback.

Before the Cowboys drafted Parsons last April, Jones had already made perhaps his most important addition of the offseason by hiring former Falcons head coach Dan Quinn as the team’s defensive coordinator. No assistant coach has been more valuable to this team, and the methodical way in which Quinn and his staff prepared Parsons for NFL football has been a driving cause behind the defense’s improvement. Dallas went from allowing a franchise-record 473 points in 2020 to leading the NFL in takeaways and turnover margin (plus 14) in 2021.

Parsons may be the NFL’s most disruptive defensive player, in part, because his skill set is singular: pass rusher, run stopper, defensive back. He can affect games in so many ways that sometimes, he just takes control of them. Parsons is almost certain to be named the NFL’s Defensive Rookie of the Year, and on Sunday, he’s the one player whom San Francisco quarterback Jimmy Garoppolo will have to account for before every snap.

Parsons checked every box in his rookie season: His thirteen quarterback sacks were the sixth-most in the NFL, which is extraordinary given that Parson ranked 118th in pass-rush attempts with 307. He was ninth in quarterback pressures (67), second in forced throwaways (nine), and third in tackles behind the line of scrimmage (20). He dropped into pass coverage 284 times and didn’t allow a single touchdown pass.

“I don’t even know what the comp is,” NFL Network analyst Brian Baldinger told the Dallas Morning News. “You always try to draw a [comparison] in this business. I’ve never seen a player who has this versatility to him.”

Parsons has the persona of a star. He’s confident, talkative, and instantly likable, and if the Cowboys finally find some playoff magic, chances are he’ll become very famous. That he was born in 1999, three years after the Cowboys last won a Super Bowl, makes his story even more compelling.

“I feel like I can do almost anything that anyone can do out there on the field,” he told the Morning News. “Anything. I want to be one of those players where they got to know where I’m at. There is nobody like me.”

Sunday will be the eighth playoff meeting between the Cowboys and 49ers, and it’ll be the first time that two franchises that each have five Super Bowl wins will face off in the postseason. Previous Cowboys-Niners playoff clashes have provided some of the NFL’s most iconic moments. Atop that list is “The Catch”: Dwight Clark’s leaping, game-winning touchdown grab in the back of the end zone to win the 1982 NFC championship game.

“I had this dream where I would be the first person to get to six Super Bowls,” Cowboys safety Charlie Waters, who was covering Clark, later said. “I would be the MVP, go out on top. Instead, I was in the end zone of Candlestick Park with my face buried in green kitty litter.”

The Cowboys have had their moments in the rivalry. A 17–10 victory in San Francisco propelled Dallas to the franchise’s first Super Bowl in 1971, and a 30–20 Cowboys win in 1992 sent Jerry to his first Super Bowl as team owner.

Late in that game, the Niners had cut Dallas’s lead to 24–20. The Cowboys got the ball back with 4:22 remaining, and as they started their drive, fans wondered if the Cowboys would play cautiously, run the ball, kill some clock. Nope. Instead, offensive coordinator Norv Turner told Johnson: “Jimmy, I’m going to be aggressive.”

On the first play, with the 49ers lined up to stop the run, Aikman fired a seventy-yard completion to Alvin Harper. Three plays later, the Cowboys scored the clinching touchdown. Legends would grow from this moment. Had Jimmy Johnson really walked the field before the game and found a firm spot in the soggy turf? Did that attention to detail send the Cowboys to the Super Bowl, where they would smother the Bills 52–17 and bring a title home to Dallas?

What’s that line from The Man Who Shot Liberty Valance? “When the legend becomes fact, print the legend.”

Regardless, Turner’s decision to let Aikman throw was a brilliant play call that rocketed the Cowboys to a great four-year run. In this year’s playoffs, the defending-champion Buccaneers and the 13–4 Packers are popular picks to win the NFC. Both teams are more established than the Cowboys, but still, the Dallas roster enters the postseason healthy, talented, and capable of running any team off the field on the right day.

“We view this as a starting line,’’ McCarthy said.