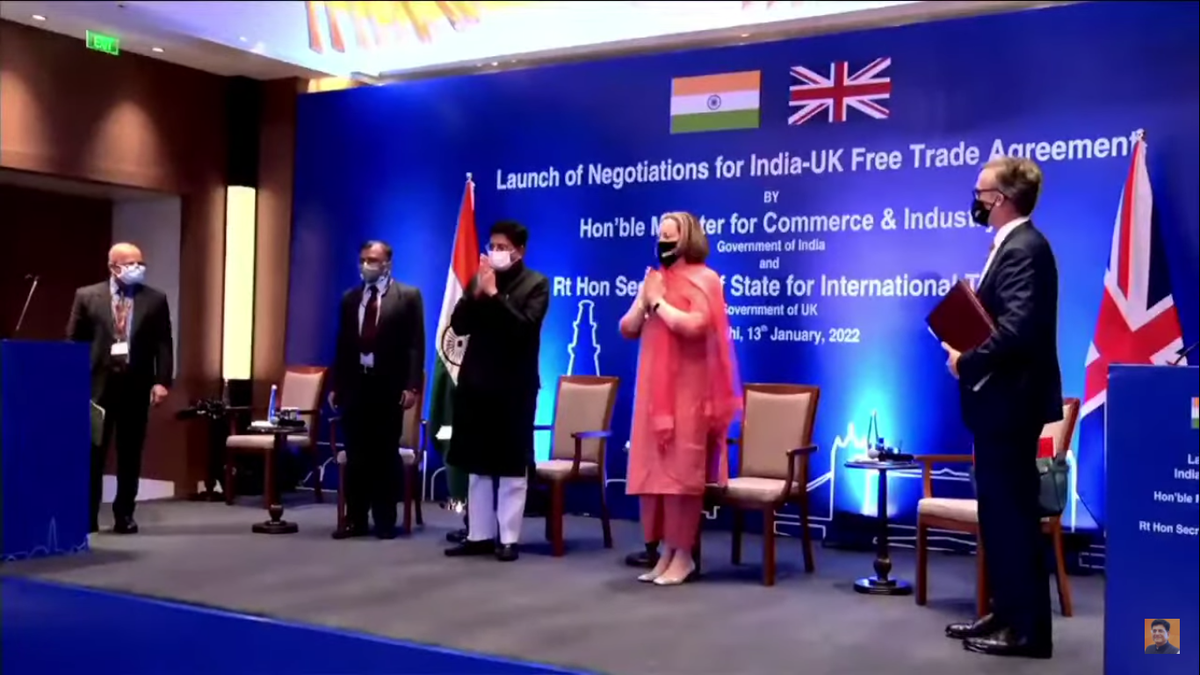 India and UK have formally launched free trade negotiations and finalised the terms of agreement to double bilateral trade by 2030 for a post-Brexit free trade deal.

Anne-Marie Trevelyan, UK secretary of state for international trade, and her Indian counterpart Piyush Goyal launched the deal on Thursday. She was on a two-day visit to India to hold talks on the “mutually beneficial agreement” for jobs, businesses and communities.

The UK’s main demands include removing enormous import duties on scotch whisky and cars, which are currently at 150 per cent and 125 per cent respectively. New Delhi, in turn, reportedly wants to make it easier for Indians to get British visas.

During the negotiations, India agreed to consider an interim agreement to “generate early benefits” within a year’s time while the UK aims to achieve a broad and fully fledged free-trade agreement (FTA) in the near future.

The deal to boost two-way trade by $38bn (£27.7bn) a year by 2035 is reportedly being keenly pursued by Britain to make up for the significant setback to its commerce with its biggest trading block, the European Union, since Brexit.

Though the UK has already forged partnerships with countries such as New Zealand and Australia, the outcome of these trade deals is expected to be significantly obliterated by the negative drag from weaker EU trade.

In 2019, trade between India and UK stood at $15.4bn, which was equal to only three per cent of Britain’s total trade with the EU. But India, with a GDP of £2 trillion, is predicted to become the world’s third-largest economy by 2050. A deal with India, therefore, could be considered a big step for the UK.

The deal remains crucial for India too as it walked out of the Regional Comprehensive Economic Partnership (RCEP) in 2019 and began to renegotiate FTAs with other countries. It has also come as India’s imports have risen over the past years while exports saw a tepid growth.

Harsh V Pant, professor at Kings College London and director at think tank Observer Research Foundation, told The Independent that it was an opportune moment for both countries to carve out their paths as there is some vacuum for trade deals in both India and the UK.

But he cautioned that India may need to tread carefully on the issue of immigration and visa rules as well.

“As India is not part of a big trading block and there is a change of perception regarding FTAs in the government, it is important that India – especially at a time global economies are getting fragmented and supply chains are restructuring – carves out the structure so that it is not left behind,” Professor Pant said.

“India is also expected to register a quantum jump in the export of marine products through the recognition of 56 marine units of India,” he added. Exports are also expected to increase in service sectors such as IT, nursing, education and healthcare, including the country’s Ayush programme for alternative medicine, Mr Goyal said.

The minister said India would seek special arrangements for the movement of its people, referring to visa concessions and immigration quotas. But he added that there was no demand that “is absolutely a deal-breaker”, and both sides have agreed that sensitive issues are not the priority.

Ms Trevelyan called it a “future-facing deal” and a “golden opportunity” to put UK businesses at the front of the queue of the Indian economy.

“We aim for this to be a future-facing deal, accelerating the business that we do together in cutting-edge sectors that are reshaping the global economy,” Ms Trevelyan said in New Delhi.

Professor Pant underscored that India can leverage its strengths in the service sector, which has been its strong area historically.

“How can India gain its own service sector embedded in British system is something India will be looking at carefully. Of course, Britain has been interested in reduced tariffs for scotch and automobiles where India had not been open the way they would like them to be. Even basic cutting down tariffs across the board would lead to a significant increase in trade volumes,” he said.

But he added that the issue of market access will remain a very crucial topic to see that it does not create more conflicts than it resolves as both are looking to enter each other’s market in a big way and both have a fare share of production power.

“Another area that could be a deal-breaker and has been in the past during Theresa May leadership was immigration and visa policies,” he said.

The first round of negotiations in FTA will begin on 17 January, and future rounds of negotiations will take place approximately every five weeks, the British government said.