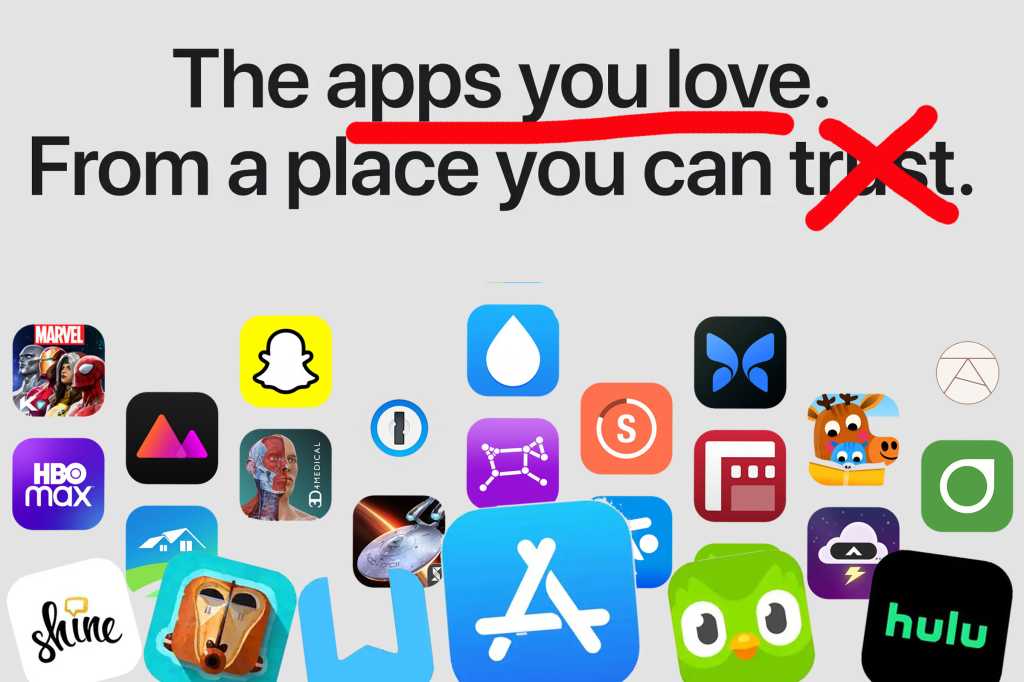 For over a decade, the App Store has proved to be a safe and trusted place to discover and download apps. But the App Store is more than just a storefront — it’s an innovative destination focused on bringing you amazing experiences. And a big part of those experiences is ensuring that the apps we offer are held to the highest standards for privacy, security, and content. Because we offer nearly two million apps — and we want you to feel good about using every single one of them.

I think for millions of users, that statement is kind of a joke. The App Store is absolutely rife with scam apps, knockoffs, deceptive and exploitive subscription fees, and fake reviews that prop it all up. You need look no further than this week’s Wordle kerfuffle for an example.

The problems are obvious to anyone familiar with the App Store and broader app ecosystem, but perhaps less obvious to the casual user. And that’s worse—that’s why iPhone users are getting hoodwinked into downloading apps that aren’t what they think they are and paying monthly subscription fees for trash that often doesn’t work.

It doesn’t have to be this way, and it’s way past time for Apple to clean house.

Wordle was just the most recent example

A lot of noise was made about the recent rash of Wordle apps appearing the App Store. The web-based game has become a big hit, it’s free, and it’s and only available on the web. So several enterprising hucksters decided to copy it entirely, including the name, and sell it on the app store. One of them even had the gall to charge a $30 per year subscription fee!

It got a lot of press, largely because so many in the tech press are playing and enjoying Wordle, and it didn’t take long for Apple to do the right thing and remove them. (If you want the real Wordle as an “app” on your home screen, we’ll tell you the easy way to do that.)

But Apple appears to have made this move only because it was getting a lot of negative press. Copycat apps are common in the app store, and have been for years. They’re not even hard to find. The same goes for apps that try to trick you into thinking they’re something else.

If you buy a Samsung smart appliance or TV, you will probably be encouraged to download Samsung’s SmartThings app, which lets you control your TV and other smart home devices.

If you search for it on the App Store, you’ll see lots of apps explicitly designed to trick you into downloading them instead. One is called “Smartthings TV remote control,” another is “Smart Things for Smart TV.” They are free to download but have in-app purchases, and generally require a subscription to actually use as intended.

You can’t even rely on the first search result being the authentic free Samsung app, because Apple happily sold an add to one of these other apps to appear on that search result. “Smart TV Things for Sam TV App” is free but requires a $30 yearly subscription to unlock all its features, and it’s the first thing a person would see if they searched for “smart things.”

We’re not talking about a small individual developer with a simple word game, we’re talking about the smart home platform for one of the world’s largest electronics manufacturers with copyrights and trademarks galore. If Apple won’t prevent scam apps from targeting them, what choice does the average developer have?

Knockoff apps are one problem, but exploitive “trash apps” are another. A recent Twitter thread from Kosta Eleftheriou gives just one real-world example of the breed. Make a simple app that something really basic (in this case, a simple volume booster). Buy thousands upon thousands of fake five-star app reviews. Make the app have a huge subscription cost ($10 a month for volume boosting!) that is super hard to cancel. Then sit back and rake in the money.

AppMe has responded to the criticism by lowering its subscription costs and vowing to look into its “outside consultants,” according to an email sent to The Verge. But if a high-profile Twitter thread is what’s needed to bring attention to the issue, the problem is clearly much bigger than one app.

Apple could fix this

Of course, the fact that these are so easy for humans to spot makes it all the more frustrating that Apple, who always advertises the App Store as “safe and trusted,” seems unwilling or unable to do anything about the problem.

This is the biggest tech company in the world, worth some $3 trillion dollars. If I can find several apps violating Samsung’s SmartThings trademark in under an hour, certainly a trained group of just a couple hundred people could find thousands of bad apps every week? Funding for a group like this, even if they were well-paid employees and not third-party contractors, would be a rounding error on Apple’s profits.

If humans can quickly notice that the same “users” with ridiculous names give multiple five-star reviews to several different apps in a day, day after day, surely an algorithm could very easily detect and flag fake reviews? Or that just-created accounts are suddenly reviewing dozens of apps that they’ve used for mere minutes each?

Apple doesn’t tell developers exactly what they can or can’t charge for apps, but the App Store Review Guidelines seem to forbid copycats in section 4.1, stating, “Come up with your own ideas. We know you have them, so make yours come to life. Don’t simply copy the latest popular app on the App Store, or make some minor changes to another app’s name or UI and pass it off as your own. In addition to risking an intellectual property infringement claim, it makes the App Store harder to navigate and just isn’t fair to your fellow developers.”

But if that’s anything other than a gentle suggestion, I can find little evidence of Apple actually enforcing it systemically.

Apple is incentivized to do nothing

Fixing these obvious App Store problems isn’t all that hard for the world’s most valuable company. A dedicated team to find fakes and trademark infringement, some algorithmic examination of app reviews…the only thing that would require some real scrutiny (and perhaps a change to the App Store Guidelines) would be preventing super basic apps from charging exorbitant subscription fees, but that sort of thing relies on fake reviews to thrive, so fix that problem and the other one is greatly diminished.

Apple should also not allow app store ads at all (the 30% cut isn’t enough?), but as long as it does, it could at least require ads to target general terms instead of the exact names of competing apps.

But Apple has no economic incentive to fix this problem. Quite the opposite. Nobody is going to stop buying iPhones just because they got tricked into buying a scam app. A lot of users probably won’t even be mad at Apple, though they should: the company assumes responsibility the moment it decides to be the sole, heavily-curated distributor of apps for its platform.

But Apple takes a 30 percent cut. When a scam app siphons a hundred bucks or more a year from some poor sucker who can’t figure out how to cancel the subscription for a basic QR code reader app (a feature built into iOS, mind you), Apple gets 30% (or 15% after the first year).

It’s would be a trivially small amount of money for Apple to create an internal group dedicated to proactively finding and eliminating scam, copycat, infringing, exploitive apps. But every one it finds costs Apple money. And doing nothing isn’t hurting sales, not when it’s so much cheaper to just market the App Store as so secure and trustworthy. Apple seems to view App Store trust and quality as a marketing activity more than a real technical or service problem.