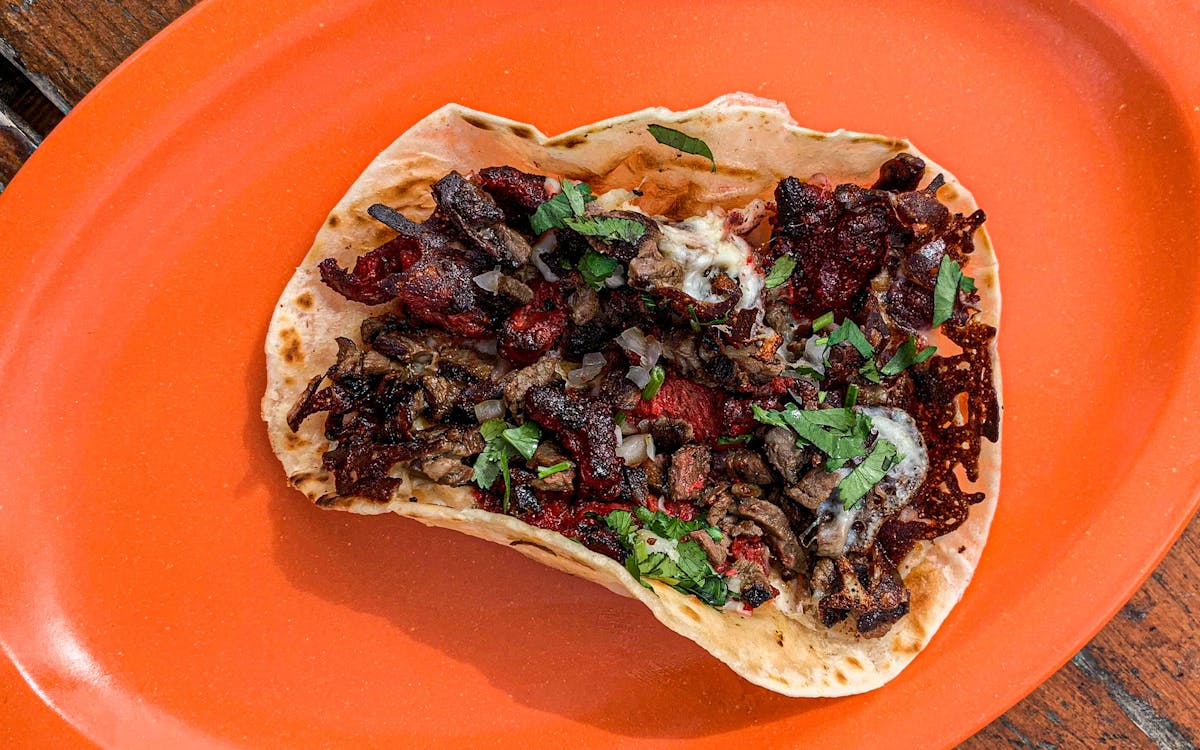 In the summer of 2014, I spent most of my Friday evenings at the Dallas speakeasy taqueria, Dos Primos Tacos. The operation, run out of a residential Oak Cliff backyard, specialized in tacos de trompo, the vermilion-colored, paprika-forward, northern Mexican cousin of al pastor. The crispy pork slivers—sliced from the wood-fired vertical spit—clung to small, doubled-up corn tortillas that shimmered with oil from the flattop. I garnished the tacos with chopped cilantro, diced white onion, and a flourish of salsa de chile de árbol so spicy it made my ears sweat. It was my happy place.

In 2016, the backyard taqueria closed, changed its name to Trompo, and moved into a brick-and-mortar in west Dallas. Becoming a legitimate business meant adhering to health regulations that prohibited using wood to fuel the trompo. So owner Luis Olvera switched to a gas-powered rig. The change didn’t impact Trompo negatively. Shortly after opening, the taqueria was not only declared one of Bon Appétit’s fifty best new restaurants of the year, but the magazine also christened the namesake dish the best taco of 2016, affirming Trompo as Dallas’s latest dining darling. In 2019, Trompo moved back to Oak Cliff, into the redeveloping Bishop Arts District. In mid-2021, Olvera expanded to a second location in an East Dallas shopping center.

Publicly, things couldn’t have looked better. But in a matter of months after the East Dallas Trompo opened, the Oak Cliff location closed permanently. I learned of the news via a social media post on December 28. My stomach twisted into knots as I read it.

The image, which was posted to Instagram and Facebook, featured an order ticket. At the top of the small sheet of paper were the words “The Last Taco.” It had been uploaded that morning, but the date marked on the receipt was Christmas Eve. The caption read, “Oak Cliff, Trompo loves you, we will miss you, it’s been real. Come see us in East Dallas.”

The neighborhood had lost a homegrown fixture. Like the great tacos it served, Trompo had a short existence, was worth relishing more in retrospect, and left me craving more.

The post didn’t detail the reasons behind the closing, but according to my conversations with Olvera, business was almost immediately tough at the Bishop Arts location. The building—a long, narrow former day-care center—was always in need of repairs. The HVAC was repeatedly breaking, and the electricity was constantly being fixed. Exxir Capital, Olvera’s landlord and developer of much of the new construction in the Bishop Arts District, made Olvera a lot of promises. For example, it said the gravel lot behind the taqueria would be transformed into a proper patio. A freight car opposite the taqueria’s patio would be turned into a bar. Trompo would get proper sidewalk signage, instead of having to resort to a sandwich board. But those changes didn’t happen, and construction on Tenth Street, the site of Trompo’s parking, confused potential customers and led to loss of income.

The gravel-lot patio was better than nothing, though. I would spend lengthy meals sitting at one of the folding tables. I’d order a couple tacos de trompo and one campechano—a large, nearly translucent flour tortilla folded around a mix of trompo pork and carne asada in a melted net of white cheese. Occasionally I’d go with the trompo burger, a type of Mexican hamburger that includes a beef patty, a slice of ham, slices of trompo meat, cheese, and traditional burger fixings. I tried to make it out to sample specials like burritos and brisket tacos, and rearranged my schedule for patio pop-ups of barbecue, wood-fired trompo meat, or bowls of sweet, gamy cabrito. Fans and influencers would come from as far as McKinney to eat at the Oak Cliff Trompo. It wasn’t enough.

By September 2021, Olvera was near a breaking point. He’d been hearing rumors that the building was going to be razed. Then, on September 27, Olvera received an email from Exxir stating that it needed to meet with him about changes in rent. He went in thinking that his rent would be lowered due to word of the building’s demolition. He was wrong. Olvera was told rent would increase fifteen percent.

“With Exxir, nothing has ever gone right, ever,” Olvera told me. “So then I was like, ‘Wait, you guys are increasing my rent, but I’ve been hearing rumors from good, credible sources that you’re demolishing my building.’ ” According to Olvera, Exxir’s representatives feigned surprise before confirming the rumors. He told Exxir he would need to think about his next steps. Olvera quickly made up his mind. He was going to close that location of Trompo. “I was thinking, ‘My rent is super high. Everything is broken in the building. I have a really bad time with this place because it’s a really, really bad situation,’ ” he explained. Olvera notified his landlord that he would close by the end of the year.

An Exxir employee reached out to him later to salvage the relationship and prevent the loss of the business. Olvera’s response was to paraphrase Tony Montana from Scarface: “I’m a man of my word. I have nothing but my word and my balls, and I don’t break them for nobody.” Olvera was told his rent would be reduced and paperwork drawn up, but he stuck to his word. A representative from Exxir would not confirm Olvera’s story nor speak on the record.

Although Olvera is on his way to finding peace in his decision to shutter the Bishop Arts outpost, it remains a huge loss. Knowing Trompo was down the road from my house and that its food would never fail me offered a sense of security, especially during the pandemic. I’ll get over my grief. But while I know there are other incredible taquerias nearby in Oak Cliff, there is no replacing Trompo.