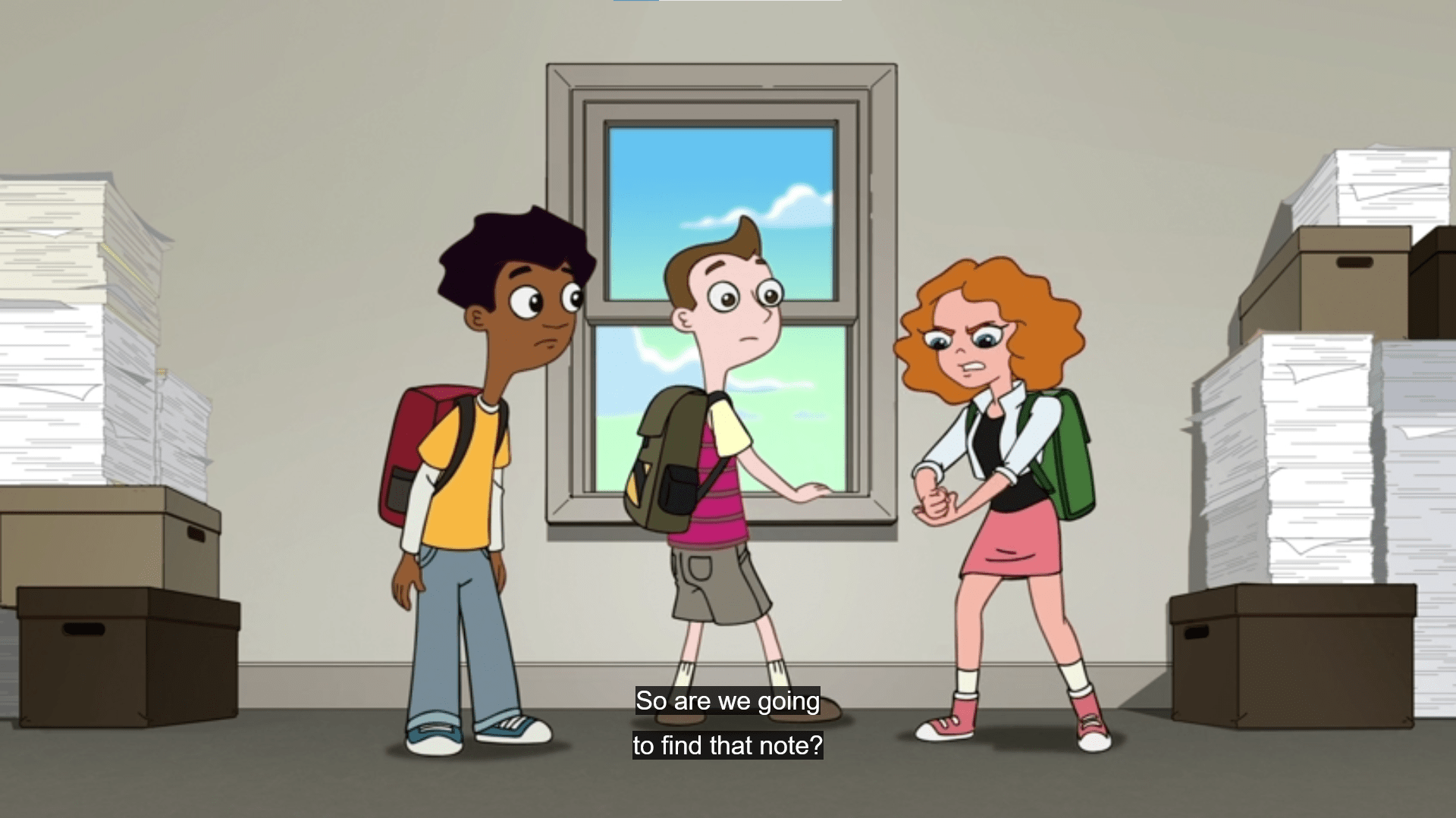 What if someone creates a cyclone of calamity wherever they go? Milo Murphy’s Law answers that question, with Milo always prepared for the unexpected and turning any disaster into an adventure!

Milo Murphy’s Law is an animated comedic action-adventure animated series by Jeff “Swampy” Marsh and Dan Povenmire. Both also created the acclaimed musical comedy series, Phineas and Ferb, which ran for four seasons. Milo Murphy’s Law is much more than a simple television series where anything that can go wrong will go wrong, i.e. murphy’s law. It is Milo’s world in more ways than one.

As a warning, this recommendation discusses some spoilers for Milo Murphy’s Law.

Milo Murphy’s Law centers around three characters: Milo Murphy (voiced by “Weird Al” Yankovic), Melissa Chase (voiced by Sabrina Carpenter), and Zack Underwood (voiced by Mekai Curtis). It follows adventures of Milo and his best friends as misfortune follows him wherever they go. But, he remains upbeat, carrying a backpack which always has what he needs for any eventuality. We later meet his mom Brigette (voiced by Pamela Adlon), an architect, and his dad, Martin, who is a safety inspector.

The story is from Milo’s perspective as he faces obstacles. This includes an arrogant student named Bradley (voiced by Vincent Martella) and a self-described safety czar named Elliot (voiced by Christian Slater). He gives himself the mission to stop Milo no matter what, although often he is far from successful.

The series begins as a comedy almost from the get-go with physical slapstick humor. Zack, a new kid who once was part of a boy band known as the Lumberzacks, soon becomes Milo’s best friend. He joins Melissa, a long-time friend of Milo, whose father, Richard, works as a firefighter. He later learns just roll with it and be for Milo when he needs help.

This differentiates it from Phineas and Ferb, which set in the same town. In that show, Phineas and Ferb engage in a grand new project every day of the summer. Milo, on the other hand, causes calamities everywhere he goes, using a backpack his babysitter, Veronica, gave him.

Milo’s dog, Diogee (voiced by Dee Bradley Baker) plays an important part in his adventures. Although Milo tells him to go home, a running gag throughout the show, he helps Milo when he or his friends are in a tight spot.

A funny plotline is continual speculation whether or not a teacher with a Romanian accent, Kyle Drako (voiced by Michael Culross) is a vampire. One of Milo’s classmates, Chad Van Coff (voiced by Django Marsh) is completely convinced that Drako is a vampire, but it is never said whether Chad is right. It is up the audience to decide it for themselves. There are also funny jokes about plot holes and flashbacks throughout the show.

The show divides itself between Milo’s time at Middleton Middle School, the town of Danville (above ground and underground), and the wider world. This includes adventures through time itself! This isn’t immediately evident from the beginning of season 1. It becomes more of a plot point when four agents from the Bureau of Time (Vinnie Dakota, Balthazar Cavendish, Savannah, and Brick) become recurring characters in the series.

The first two, voiced by Dan and Marsh, are time travelers tasked with stopping the pistachio from becoming extinct. The latter two, voiced by Ming-Na Wen and Brett Dalton, are secret agents also from the future who travel in a time-traveling limousine. Mark Hamill plays the annoyed superior of Dakota and Cavendish, Mr. Block. Time travel plays an important part in this series, often as a subplot, so much that both agents are later banned from time travel altogether.

Other agents consider the two bumbling agents, Dakota and Cavendish, a joke. They prove themselves when they end up saving the world from mutant pistachios, known as Pistachions, with Milo’s help. Of course, they don’t get credit for this, as their boss doesn’t remember this due to the altering of the timeline and still talks down to them.

As a person who likes time travel in fiction, and a long-time fan of Futurama, this pulled me further into the series. Dakota and Cavendish are both from “the 70s”. Dakota dresses in a 1970s track suit while Cavendish dresses like a person from the 1870s. Some fans have even shipped both characters together based on their interactions during the show, as they act as best buds in the show itself.

Unfortunately, the series doesn’t include any outward LGBTQ characters. Even so, Swampy said that “some characters” in Milo Murphy’s Law and Phineas and Ferb are part of the LGBTQ community but he did not specify which characters. This inspired some to make fan art. Additionally, there are over 380 fics on Archive of Our Own which ship Cavendish and Dakota together as “Dakavendish.”

Fans of Doctor Who would love this series. There is a whole sub-story focused around a sci-fi franchise known as Dr. Zone, based on Doctor Who. Milo and his sister Sara (voiced by Kate Micucci) are big fans. The creator of the franchise, Orton Mahlson (voiced by Jemaine Clement) is even inspired by Dakota and Cavendish. His sidekick, in the episodes is a Time Ape voiced by Sophie Winkleman.

A Cuban-American actress named Chrissie Fit voices Amanda Lopez. She was originally planned to be a white character, but was changed at Disney’s urging. The executives told Dan and Swampy to make the show more diverse. The show also includes actors of Malaysian, Chinese, and Jamaican descent, specifically Wen and Olivia Olson.

Amanda is perfectionist like Pearl in Steven Universe. She unexpectedly falls in love with Milo, who also likes her back. While they are never directly shown as in a romantic relationship, there are romantic feelings between the two of them. This is curious since Amanda likes order and Milo causes chaos everywhere he goes. They especially show how they feel about one another in the second season, with Amanda even getting jealous when other girls are nice to him, and giving him a kiss on the cheek in another episode.

The same is the case for Milo’s dad, Martin (voiced by Diedrich Bader). He is a safety inspector but is affected by murphy’s law as much as his son. It’s as much an oxymoron as Homer Simpson being the safety inspector at the Springfield Nuclear Power Plant in The Simpsons. In the latter case, the building becomes unsafe the second he leaves the building.

Milo and Amanda are the not the only ones to express romantic feelings toward each other. There is a slow-burn romance between Melissa and Zack, and Sara has a crush on Neal, who works at a comic shop. Maulik Pancholy, an actor of Indian descent, voices the latter character.

Pancholy also voices a recurring character in Phineas and Ferb, Baljeet. Both shows merge together at the beginning of season 2 after a crossover episode, where characters from each show work to defeat the Pistachions. Prof. Doofenshmirtz, Perry the Platypus (i.e. “Agent P”), Major Monogram, and Carl appear as recurring characters in Milo Murphy’s Law. As a result of the crossover, Doof crashes at Milo’s house until he gets kicked out for being a nuisance.

Even Vanessa Doofenshmirtz, voiced by Olivia Olson, reappears in one episode. Voicing Vanessa was Olson’s first major animated role before she voiced Marceline the Vampire Queen in Adventure Time. In fact, this role was one of the reasons that Pendleton Ward, the Adventure Time creator, brought her in to voice Marceline in the first place! If there had been no Vanessa, there wouldn’t have been no Marceline, at least not as we know her today.

Events in Milo Murphy’s Law and Phineas and Ferb also connect them together. For instance, Melissa is afraid of rollercoasters because of scheme by Phineas and Ferb. There are many other background details and events similar to both series.

By the show’s second season, Swampy and Dan voice at least seven characters together. Other characters are voiced by talented actors like Greg Cipes, Alyson Stoner, Mackenzie Phillips, Sarah Chalke, and Larine Newman.

In the last half Milo Murphy’s Law‘s second season new villains appear: a group of aliens known as Octalians. Milo’s negative probability ions interest them and they try to capture him, hoping to save their planet from destruction. Joanna Hausmann, Odessa Adlon (Pamela Adlon’s daughter), Brock Powell, John Ross Bowie, Cedric Yarbrough, and many others, voice these aliens.

Like many Disney shows aimed at children, music fills the episodes of Milo Murphy’s Law. There are over 60 songs in seasons 1 and 2, along with 25 songlets. This pales in comparison to Phineas and Ferb, which almost has a musical number in every single episode. Even so, its catchy opening theme gets you in the mood to watch every episode.

The music accompanies the wonderful animation and background art of the series. It’s not as detailed as a series like Arcane, but it is strong enough to move the story forward. It keeps you inside of Milo’s world for each 22 minute episode, usually divided into two segments. The show also doesn’t try to take itself too seriously, poking at the construction of animated shows throughout its run.

Some episodes criticize Silicon Valley tycoons and brainless consumers. Others have futuristic devices and robots. There are more fundamental themes in the series, such as the importance of family, self-acceptance, and identity. Some focus on the weight of adult responsibilities, which Prof. Doofenshmirtz called “adulting,” while others focus on themes such as historic preservation, environmental protection, and automation.

While the last episode of Milo Murphy’s Law aired on May 18, 2019, strong viewings of the show raise the possibility of the third season. There is a strong audience demand for the series and Dan has said that the show’s success might “justify a couple of specials.”

In the end, if you want to watch a show that will make you laugh with its absurdity and wacky storylines, then give Milo Murphy’s Law a watch on Disney+. While you are at it, you can watch Swampy and Dan’s first series, Phineas and Ferb, on the same streaming platform.

Burkely is an indexer of declassified documents by day and a fan fic writer by night. He recently earned a MLIS with a concentration in Digital Curation from the University of Maryland. He currently voraciously watches animated series and reads too many webcomics to count on Webtoon. He loves swimming, hiking, and searching his family roots in his spare time.