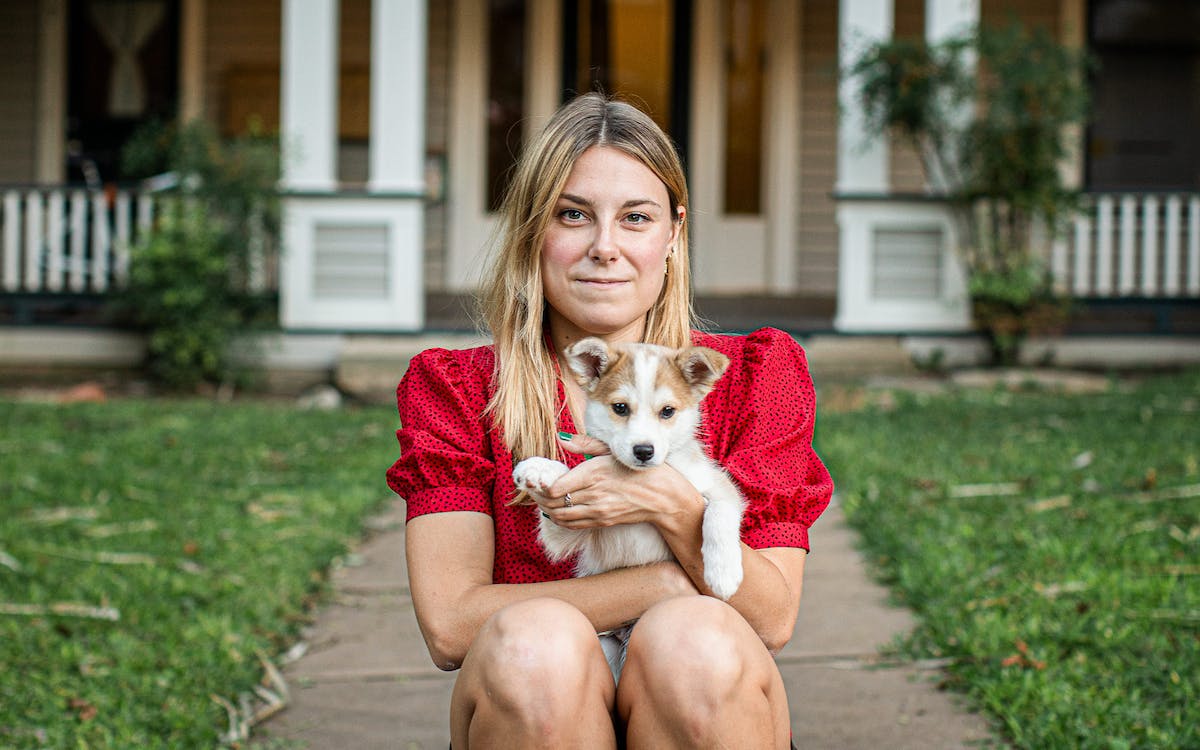 I had the name before I had the dog: Augie, short for Augustus. I’d read Lonesome Dove for the first time over the summer and become enamored with Augustus McCrae, the quick-witted, sharpshooting cowboy with a heart of gold. I imagined owning a little dog like Gus: loyal, clever, loving, and a bit hardheaded.

The facts of Augie’s life are thus: He wound up at a West Texas rescue shelter as a ten-week-old puppy. I adopted him over the phone a few days later. My partner, Marshall, and I spent three weeks counting down the days until we’d get him, starting every morning with a declaration: Only fourteen days until Augie! Only three days until Augie! On October 28, we drove from San Marcos to San Antonio, where we met someone from the shelter—and Augie—at a Bass Pro Shops parking lot. After we brought him home, we’d sit around, like new parents, watching him breathe and wondering what he’d be like when he got older.

He was smaller than one of my boots. All pet owners think their dogs are perfect, but he was perfect. He liked to sleep directly on top of our feet. He weighed just five and a half pounds, most of which appeared to be scruffy tan-and-white fur. He had little black eyes and a tiny black nose, which made him look like something out of a cartoon. He was self-sufficient and quickly taught himself how to climb stairs. We watched him go up and down and up and down, seemingly pleased with himself.

Just over 36 hours after we got him, Saturday morning dawned cloudless and cool. Marshall and I woke up early with Augie, who had slept soundly through the night. Before we planned to head out for the day, we took Augie out to my apartment complex’s unfenced front yard to potty. We watched him toddle around on his unsteady puppy legs and played our new favorite game: What would he be like when he got bigger?

The neighborhood was quiet. Marshall walked around the corner of the building to check our laundry while I stayed with Augie in the yard, tugging him around on his blue leash.

Suddenly, a big black dog—off-leash but wearing a pink collar—ran over from the sidewalk alongside my yard, then paused inches away from us. I didn’t see the dog’s owner, and I immediately tensed. Augie, who, we’d been told by his foster mom, loved to socialize, brought his tiny black nose up to the other dog’s snout.

Those who’ve witnessed a dog attack will tell you first about the speed. It’s a blur not only in memory but in real time. The big dog snarled and was on top of Augie within a second. Augie’s pale fur flashed through the air. I kicked and pushed. There was a series of squeaks and grunts, and then there was silence. I must have been screaming, because Marshall came running back around to the yard. By then, the big dog had dropped Augie. A passerby who had happened to witness the attack from the sidewalk ran up, grabbed the dog by its collar, and hauled it off to his car, parked across the street. From there, we’d later learn, one of its owners retrieved the dog until animal control seized it within the next few days. I picked Augie up and put him in my lap. He felt heavier than before. His pink mouth went white against my navy sweatpants. We rushed him to the emergency vet, but it was too late. He’d died almost immediately, they told us, his fragile chest completely crushed.

I don’t remember the hours that followed. We left the vet in a daze. All of Augie’s little toys sat where he’d left them earlier that morning. I threw some of them down the stairs in an outburst of tearful anger. Marshall and my neighbors tried to find the rest and hide them away, but for weeks, we’d come across tiny Nylabones and braided ropes that had been pushed underneath the furniture.

Late in the afternoon, we packed bags and drove to my parents’ house, in Houston. A friend called San Marcos Animal Services to report the attack and describe the appearance of the other dog. The residents of my apartment complex and entire block turned into ad hoc detectives, seeking information about the dog that’d killed Augie. I fielded calls from several neighbors I’d never met before, who had come out of their houses the morning of the attack. They all mentioned one house—the one directly across the street from me—where they thought the dog’s owners lived. An animal control officer contacted me a few days later to ask, could Marshall and I come by to identify the dog?

At the animal services facility, we walked through the corral of cages, getting barked at. I was shaking. We paused before a big black dog wearing a pink collar. It was unmistakably the dog that’d mauled mine, the dog that my neighbors had told me lived in the house right across the street.

For the next few days, we teetered between anger and paralyzing grief. I called a local lawyer whom a family member had recommended. What were my options, now that we knew who was responsible? Over the phone, he explained that in Texas, as in most other states, Augie wasn’t worth all that much. According to an 1891 Texas Supreme Court ruling that’s yet to be amended or reversed, dogs in the state are considered chattel, an outdated term for an item of personal property that isn’t real estate. (“Chattel” often referred to livestock, wives, and enslaved people.)

If I decided to pursue legal action against the dog’s owners, the best reward I could hope for was the “market value” of Augie. Given that he was a rescue mutt, his financial worth would be low—far less that what I’d pay in legal fees. In the eyes of Texas law, Augie was worth less than my pre-owned sofa.

I reached out to another lawyer, Randy Turner, in Fort Worth, who spoke with a drawl that reminded me of my uncle. The day we spoke, Turner had already received two calls from dog owners whose pets had been killed by other dogs. Our call was at 11 a.m. I asked him how many such inquiries he gets. “I would say at least three to ten times a week, people call me because their dogs have been mauled by another dog,” he said. “And these people cry and cry. I just can’t bring myself to say, ‘Under the Texas law, you don’t have a case. All you can do is sue for economic value.’ ”

Turner gets so many of these calls in part because very few attorneys in the state handle cases of wrongfully killed pets. Turner was the plaintiff’s lawyer in Strickland v. Medlen, a 2013 Texas Supreme Court case in which he argued that pets should have sentimental value under Texas law, the same way personal belongings do. The case centered around the Medlen family, whose family dog, Avery, got out of their yard and was captured by animal control in 2009. When the Medlens went to retrieve Avery a few days later, they were told that someone at the shelter had accidentally euthanized their dog—a clerical error with devastating consequences.

Turner’s argument in Medlen was simple: If the prized Stetson your grandfather handed down is destroyed, the person who trashed it could be held liable for the sentimental value of that hat. So why not allow pet owners to sue for the same sentimental value?

At least fifteen organizations and cities had filed amicus briefs opposing Turner’s argument. Among them were the American Pet Products Association, the Texas Veterinary Medical Association, and the American Kennel Club. They argued that if pet owners could sue for sentimental value, veterinary malpractice insurance premiums would skyrocket, and pet product companies would be hit with class action lawsuits every time someone’s cat got sick from a can of food.

I also learned that market value isn’t necessarily what you paid for the pet—it’s what the pet, were it still living, could be sold for. I’d paid a $350 adoption fee to take Augie home. Because of his mystery breed status, I likely only could have sued for about $50.

Donald Feare, an Arlington lawyer whose practice is dedicated exclusively to animal law, said he teaches the Medlen case in his animal law class at Texas A&M University School of Law as an example of moral avoidance on the part of businesses. “Who got all up in arms over the Medlen case?” he mused. “What we’re talking about here is protecting business. Welcome to Texas.”

Several states, including Colorado and California, have attempted to pass legislation that would allow a person to sue for sentimental value of pets but with monetary limits, in the same way medical malpractice lawsuits work. Those bills failed. Courts still rule that pets are property, citing arguments similar to the one made by the Texas Supreme Court. (Tennessee did successfully pass legislation allowing pet owners to pursue damages for sentimental value up to $5,000.)

I asked Turner why he thinks owners call him after losing pets. “Because they don’t know that this is the law,” he said. “Every single person who’s called me about wanting to sue because their dog was killed did not care about the money. They wanted to send a message. They want to vindicate their beloved pet. They don’t want this person to get off scot-free. They want some kind of justice.”

Once I understood that closure wouldn’t come from the court system, I decided against pursuing legal action. For starters, I’m in graduate school and can’t swing the fees. And, like all of Turner’s clients, I don’t really want money. What I want is unattainable. What I want is for none of it to have happened, to be able to look at that front yard without becoming nauseated, to feel Augie’s little tongue against my ankle. What I want is the future we were planning for him.

Sometimes you have to force closure’s hand. In late November, I sublet my apartment in San Marcos. The windows of my office faced the home of the dog’s owners, and looking out at their porch had become an exercise in agony and restraint. Animal control told me the dog wouldn’t be released back to its owners, who never acknowledged what had happened—likely out of fear that an admission of guilt would lead to costly legal expenses, probably because they didn’t know quite how worthless Augie’s life was from a legal perspective.

I moved into a place in Austin that has a yard with a fence that wraps around both the front and the back. I stopped waking up gasping from nightmares in which it’s happening all over again. I plan to drive out to West Texas to donate Augie’s supplies to the shelter he came from. In a recent exchange of emails, a shelter volunteer told us that Augie had brought joy to the staff who’d cared for him, that he’d been adored, and that if I ever wanted another dog, she’d be happy to help me find one. I don’t know when that time will come, but it’s starting to feel possible. For a day and a half, we had a perfect dog. He may not have been worth much in the eyes of the law, but he was worth everything to us.

Hannah Smothers is an MFA candidate in fiction writing at Texas State University.

This article originally appeared in the February 2022 issue of Texas Monthly with the headline “A Dog’s Life.” Subscribe today.