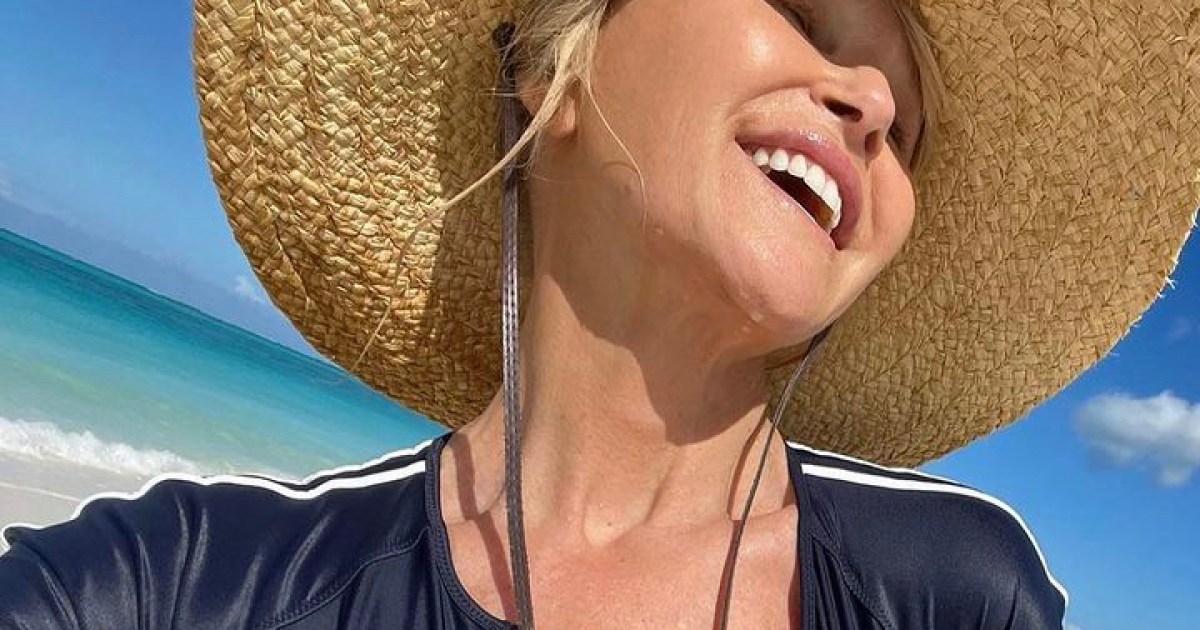 This is 67! OK, well … this is 67 if you’re Christie Brinkley. The ever-stunning model’s been sharing photos from her family’s beach getaway for the past week, including plenty of gorgeous selfies and bikini pics. “Feeling grateful from sunrise to sunset,” she captioned a gallery featuring shots of bright pink tropical flowers, a surfside sunset backdrop and more on Jan. 10. More pics of her apparently ageless figure followed the next day, along with photos of Christie’s son and daughter soaking up some rays. At one point during the family’s sun worshipping fun, the star also took time out to tell followers she’d taken steps to keep her skin safe before hitting the beach. “The words to this song are my wish for you..and I’m going to add an important beauty tip I wish I had heard sooner..,” she wrote alongside a video over the weekend. “Protect your skin while enjoying your sweet happy life. Be sure to use SPF everyday. I’m wearing SPF 50, a swimsuit with long sleeved sun protection, and a hat!”

Keep reading for the latest on Britney Spears’ family drama, the 2022 SAG Awards and more …

Kylie Jenner just became the first woman ever to garner 300 million Instagram followers, the platform announced on Jan. 12. The new milestone makes Kylie the second-most followed person on Insta behind soccer star Cristiano Ronaldo, who had 388 million followers as of Jan. 12. The timing of Kylie’s IG news isn’t too surprising, given the recent flurry of fan chatter around whether she has already welcomed her second child with Travis Scott. The Kylie Cosmetics founder confirmed she and Travis were expect a sister for their toddler, Stormi, last year. But in December, fans noticed a baby bottle that looked just like the one Stormi used as a newborn was in the corner of a photo on a cozy family holiday post from Travis Barker, who’s engaged to Kylie’s sister, Kourtney Kardashian. fans quickly began demanding Travis confirm their belief Kylie is already a mother of two. Those baby theories — and, we’re guessing, Kylie’s followers count — both exploded on Jan. 11, after the IG account @kravis4ever posted that Kylie was sporting short (read: baby-friendly) nails instead of her usual, super-long ones in a New Year’s TikTok post. It was the first time Kylie’s had short nails that fans know of since Stormi was born, leaving many of them convinced Stormi’s sibling has arrived. The Kar-Jenner krewe is currently filming their new Hulu series, according to Cosmo, so chances are we won’t know for sure what’s up Baby No. 2 until closer to or after its premiere.

RELATED: Jeannie Mai and Jeezy welcome their first child together, plus more celebs who had babies in 2022

Britney Spears has made no secret of the fact she resents her immediate family and holds them all responsible, at least in part, for the 13-year-long conservatorship she was under until last fall. That goes for her younger sister, Jamie Lynn Spears, too. But Jamie Lynn — who’s currently promoting a new memoir, “Things I Should Have Said” — claims she loves and has only tried to help Britney. During an appearance on “Good Morning America” on Jan. 12, Jamie Lynn, 30, rehashed what she says were messy family dynamics and her own personal challenges that made it sometimes hard for her to support Britney, 40. “When [the conservatorship] was put into place, I was [a] 17-year-old, I was about to have a baby. I didn’t understand what was happening nor was I focused on that. … I understand just as little about it then as I do now,” she explained. “There was no me overseeing funds or something like that, and if there was [a public perception I did that], that was a misunderstanding, but either way I took no steps to be a part of it,” Jamie Lynn continued. She went on to claim that “when [Britney] needed help, I set up ways to do so, went out of my way to make sure that she had the contacts she needed to possibly go ahead and end this conservatorship and just end this all for our family.” She said she “spoke to her legal team,” but that “did not end well in my favor,” adding, “How many times can I take the steps without … She has to walk through the door.” Finally, Jamie Lynn concluded, “I love my sister. I’ve only ever loved and supported her and done what’s right by her. And she knows that. So, I don’t know why we’re in this position right now.” In recent months, Britney’s unfollowed her younger sister on Instagram and criticized her, both directly and indirectly, on the platform.

RELATED: Hollywood reacts to the termination of Britney’s conservatorship

The 2022 Screen Actors Guild nominees were announced on Jan. 12 and much to the dismay of Kristen Stewart‘s fans, her critically acclaimed turn as Lady Diana in “Spencer” failed to get a nod. On Twitter, fans — and a member of the SAG Awards nominating committee — called her snub everything from “a disgrace” to “a shocker” to “a shame.” Industry outlets, meanwhile, noted that the SAG snub doesn’t bode well for Kristen’s Oscar chances, despite the early buzz her performance garnered. (Only three actors have ever won the top acting Oscar without first winning the equivalent SAG Award.) “Not only did her stunning turn silence any doubters, but there was a strong perception that Stewart was overdue for a nomination, having consistently turned in great work for years,” Variety said of her snub, which it deemed “shocking.” There were, of course, plenty of happy surprises for fans of “West Side Story,” “Mare of Easttown,” “Yellowstone” and more. You can check out what this year’s SAG nominees are saying about their nods right here.

Nick Cannon reflects on his 10-year battle with lupus

One decade after he was first diagnosed with lupus, Nick Cannon feels stronger than ever, even as he continues to fight the autoimmune disease that nearly killed him. The daytime TV host used part of the Jan. 11 edition of “The Nick Cannon Show” to reflect on his experience with symptoms and the gradual, ongoing recovery he’s started to have since changing his lifestyle completely. “Ten years ago, I experienced a sudden and mysterious illness that almost took my life,” Nick, 41, told his audience, according to People. “At the time, I had no idea it was lupus. And, you know me, I always have to have a camera on. So I would literally open up my phone, grab my camera and I would talk to the camera, and I documented the entire health journey.” He then shared a short video made up of clips he’d taken from the hospital and other settings related to his diagnosis with the condition, in which the body attacks healthy tissue instead of fighting infections. It commonly affects the joints, skin and internal organs, according to Lupus.org. Nick’s video begins on Jan. 3, 2012, with the TV personality talking to the camera from the hospital after suddenly becoming sick while on vacation with his wife at the time, Mariah Carey, and their twins. Told his kidneys were failing, Nick later learns blood clots have appeared in his lungs. “It’s the last place you wanna be, man. Doctors telling you you could die,” he says in the video. Later, in a voiceover, he says, “… after a decade of close calls, blood transfusions, chemotherapy and hospitalizations, I continue to push through,” adding, “throughout this journey, I had to change everything about the way I live my life, and it wasn’t easy.” Looking back, Nick says he was eventually able to “[lay] a foundation both mentally and physically to build back the life that I had almost lost to this disease.” He also points out that “having these health issues isn’t necessarily a bad thing — I see it as a way for me to help others through my experience.” There is currently no cure for lupus.

Lady Gaga‘s method acting approach to her “House of Gucci” role left her feeling a bit haunted — by flies. While playing Patrizia Reggiani, the ex-wife of Gucci family heir Maurizio Gucci and the woman convicted of hiring a hitman to kill him, Lady G was living full-time in Italy, speaking in a heavy Italian accent and channeling her own emotional past to fuel the drama she gave to her role in Ridley Scott’s movie. So what happened when it was time to say goodbye to Patrizia and become Lady Gaga again? Swarms of flies. Yep, asked if she was “sad to leave the character behind” when filming wrapped, the singer and actress recently told W Magazine that by the end, she developed a weird feeling she was being followed by something inhuman. “On the last day of filming, I was on the balcony of my apartment in Rome, and I was blasting Dean Martin singing ‘Mambo Italiano,’ … I was Patrizia,” Gaga recalled. “But I knew I had to say goodbye to her. Large swarms of flies kept following me around, and I truly began to believe that she had sent them. I was ready to let her go.” Gaga’s up for a SAG Award for her lead performance, one of the film’s three noms.

Travis Scott’s lawyers are definitely busy this month. The rapper’s already facing a pile of lawsuits related to the fatalities and injuries at his Astroworld Festival in November. Now, TMZ reports a France-based visual artist who goes by Black Childish is coming after the star for “hundreds of thousands of dollars” on grounds Travis allegedly stole Black’s artwork and used it on the cover of a release called “La Flame.” Travis’ lawyer, Ed McPherson, however, has already dismissed the suit as a “frivolous and baseless filing,” saying “Travis never released an album named ‘La Flame'” and the centaur image the artist claims Travis stole “was fan-made and was uploaded to streaming services by those fans, something that any user has the option of doing.” The attorney added that any streaming services using the image “quickly removed it after they realized that certain people were trying to pass this off as a legitimate album cover.” The artist, whose real name is Mickael Mehala, claims he DM’d the piece to Travis in 2016 on Instagram but never heard back about whether the rapper wanted to use it. Mickael says the piece was copyrighted in 2019, months before he claims he got a reply from a lawyer for Travis who said, per TMZ, “Travis was unaware of using art belonging to anyone in particular.”

“I would love to,” Penelope recently told ET when asked if she’d consider teaming up with her guy for a musical. “I saw my husband singing in the ‘Ricardos’ and he did an incredible job! He was feeling the same way I was feeling when I did ‘Nine,’ when I had no idea that I could sing but then Rob Marshall convinced me after doing a couple of tests that I could,” she said of her 2009 film. “And then because I danced for 18 years, ballet, and I’m a big fan of the dance world and music, it’s such a powerful art for me, even more than cinema, so for me the genre of musicals is a dream! I’ve only done one, so I hope I can repeat it someday.” She added that she told another journalist not long ago that she’d love to do a musical with Javier and their frequent collaborator, director Pedro Almodóvar. As for the stars’ marriage, Penelope sweetly said, “To me, he has the talent of a genius and I’m lucky to be able to call him a friend.”