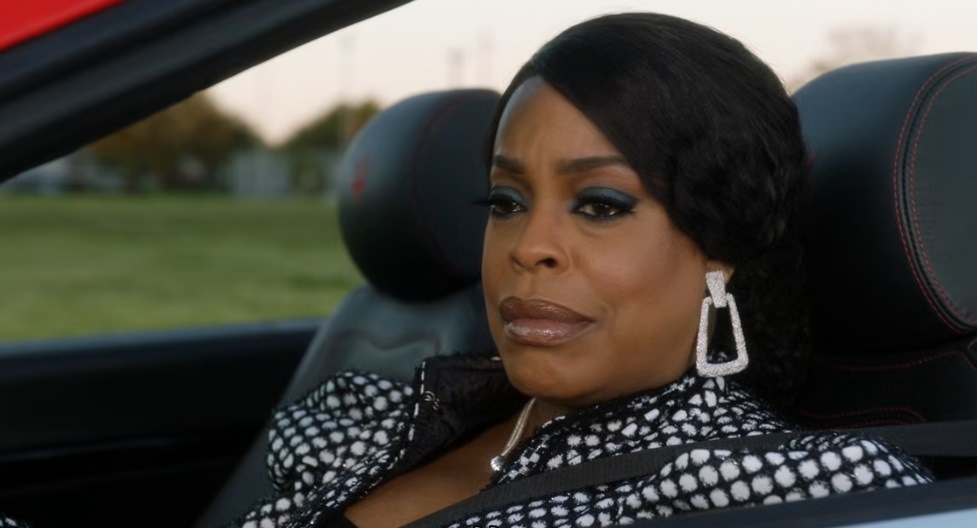 Claws season 4 episode 5, ‘Comeuppance’, focused a lot on Jenn’s family. Also, at this point, I’m not sure what Desna’s character arc is supposed to be.

With Jenn and Bryce’s daughters being taken into police custody in the previous episode, ‘Comeuppance’ opened with Desna, Jenn, and Bryce trying to get the girls back. Of course, their pleading didn’t work because they had to follow proper procedures. Being their godmother, I liked Desna’s willingness to take the girls while Jenn and Bryce sorted things out. However, to everyone’s surprise, Uncle Daddy got custody of the girls as next of kin.

Even though he’s got a bunch of faults, Uncle Daddy always came through for family. I liked how he was ready to take care of the girls. But there was a catch. The previous episodes showed Uncle Daddy being persistent about telling Jenn to stop working for Desna and stand with her family. I just knew he was going to use her daughters to push his agenda. Uncle Daddy withholding visitation until Jenn quit working for Desna was a very Uncle Daddy thing to do.

Seeing Bryce and Jenn being emotionally devastated over losing their daughters in ‘Comeuppance’ made for a handful of well-acted scenes. I really felt for the two characters. Kudos to actors Jenn Lyon and Kevin Rankin for the way they handled their roles in this episode. The things they did to try and get their girls back made sense, especially in the context of a show like Claws. I think the writers struck the right balance between humor and the gravity of the current situation.

Due to Jenn and Bryce not being able to cope with their loss, seeing them find unhealthy outlets to deal with their emotions made me sad. Bryce’s going to get himself hurt while deliberately entering the ring to face professional fighters. And Jenn can easily become addicted to pills to numb her feelings. I’m looking forward to seeing if Jenn’s friends will decide to do an intervention to get her and Bryce the proper help they need.

Jenn’s interaction with Desna was well-written, in my opinion. I also feel that Jenn’s been blaming Desna for certain stuff because she doesn’t want to be held accountable for her own actions. It’s as if Jenn’s trying to ignore the type of person she’s become over the series. She wants to be all sweet and friendly. But that’s not possible due to her line of work. I don’t know about you, but I do think that it’s Jenn’s fault her daughters walked out of the house after the babysitter left. It’s Jenn who forgot to contact Bryce or ask someone else to check on the girls because she tagged along with Desna to confront Bambi.

The episode also continued this show’s effort to highlight the problems present in the foster care system. A bunch of children experience all sorts of abuse because of the numerous faults in said system. Jenn and Bryce, understandably, didn’t want their daughters to face such an ordeal because they knew what Desna and Dean had to deal with as kids.

As for the rest of the characters, it’s clear that Axel wants to be Polly. In a sense, Polly’s also started to see him as an actual person and not her next big score. I’m okay with Polly and Axel’s storyline moving toward marriage because I’m ready to see how Axel’s kids will try and stop him from tying the knot because they want his money once he’s dead. Polly’s definitely not going to sit around and let Axel’s kids mess things up for her.

Ann also decided to listen to her employees when they shared concerns about being sent to dangerous neighborhoods to sell the fentanyl patches. I agree with the writers allowing Ann to open up a bit and not be so strict with her employees, thanks to a little pep talk by Uncle Daddy. Yes, I understand her wanting to save as much money as possible to start a new life for her unborn baby. But she shouldn’t let her ambition cost her her employees.

Having said that, I’m not sure about Ann hooking up with Cherry. After stopping things from getting hot and heavy in the previous episode, I wanted Ann to not backtrack from her decision. Being with Cherry could end up being quite messy (and not in the way I’m too interested in watching). Ann would have been better off hooking up with someone who wasn’t an employee if she wanted to feel loved again.

Coming to Desna, ‘Comeuppance’ showed her trying to be a supportive friend to Jenn while handling the aftermath of accidentally killing Bambi. Even though Bambi’s death was an accident, the fact remains it was an accident caused by Desna being too rough with her. I’m not sure if I’m liking the current version of Desna. She wants to be a successful drug dealer. But I think she’s expanding her business a bit too quickly and is trying to become someone she’s not.

As of right now, I’m not really sure where the writers want to take Desna. Is Claws season 4 going to end with her realizing that drug dealing isn’t for her? Or is she going to turn on everyone in her pursuit to accomplish her goals? We only have a handful of episodes left in the final season of Claws to get a satisfying answer.

Also, I’m side-eyeing Desna’s current love interest, Tony. There was no reason for Desna to start telling Tony the details about what she had been through and how she got her start in the money laundering and drug world. Tony’s just too eager to be a bigger part of Desna’s business. I have a feeling he’s going to betray her somehow. Some fans even think that Tony’s working with the police to bring down Desna.

Some other thoughts and questions:

Did you watch ‘Comeuppance’? What did you think of it?