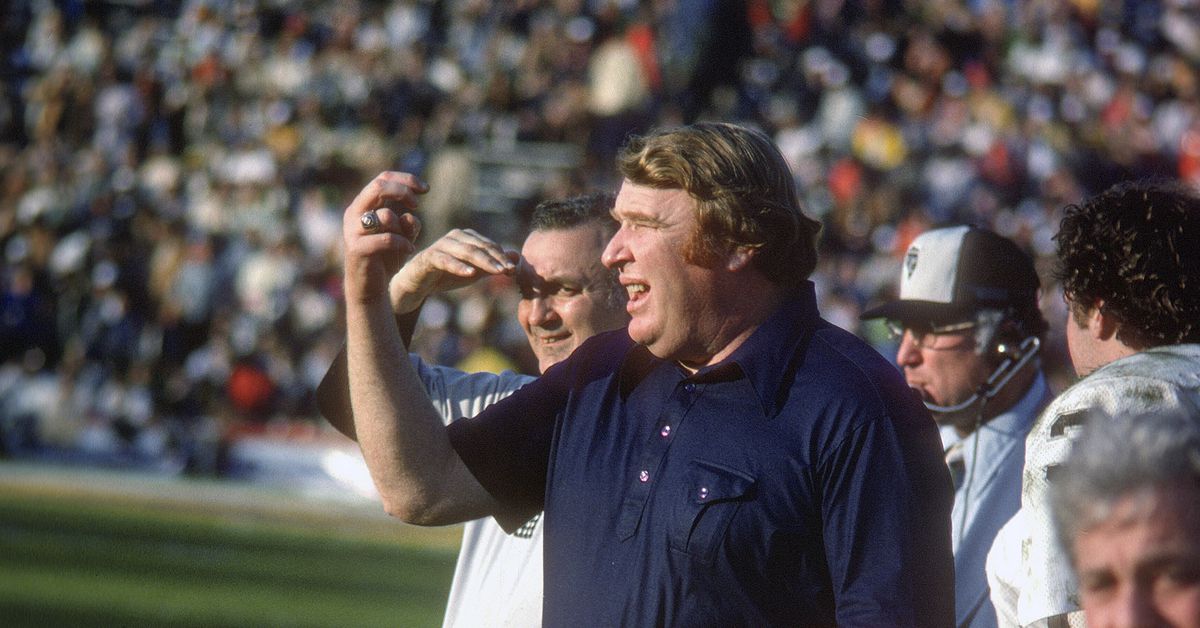 John Madden’s legacy is well established, but for most the man is a caricature. He’s the announcer so many grew up with, the lover of multi-legged turkeys, video game icon, and yeller of “BOOM” during commercials for athletes’ foot powder.

Lost in all this is one incontrovertible fact: Madden was one of the greatest coaches of all time. Perhaps on par with Vince Lombardi, depending on the metric you value. It’s okay to shudder at that comparison, but it’s true.

It goes without saying that shorter coaching careers in the NFL will naturally lend themselves to better overall records. Moving with shifting rosters and maintaining a winner over decades is something few coaches can ever achieve, which is why the greatness of George Halas, Don Shula, Paul Brown and Bill Belichick has been cemented.

However, the level of excellence that John Madden maintained with the Raiders from 1969-1978 is comparable to only two coaches in the modern era: Vince Lombardi and George Allen. All three coached at least 10 years while maintaining a win percentage of over .700.

Madden’s .759 record is impressive in isolation, but mind-boggling when you see the overall records of those Raiders teams. His absolute worst season resulted in a 9-7 finish, his last year as a coach before leaving the NFL due to ulcers and burnout. Over the course of his 10 seasons as head coach the Raiders won the AFC West seven times, and this was at a time where the AFC West was a brutal division. You had Hank Stram still leading the Chiefs, the Broncos being an ever-dangerous threat, and Dan Fouts emerging to lead the hapless Chargers.

The only potential criticism of Madden as a coach is his lone Super Bowl win, but in the context of the newly merged NFL it was ludicrously difficult to win it all. During Madden’s 10 year tenure he faced some of the greatest teams in the history of football in the playoffs. Shula and his juggernaut Dolphins, Pittsburgh’s Steel Curtain, Tom Landry’s Cowboys, the Vikings’ Purple People Eaters — teams baked into the legend and ethos of the NFL and venerated to this day.

If we want to use postseason success as the only metric by which to judge a coach, sure, Madden may fall a little short, but that’s also extremely myopic. His unbelievable gift as a coach came from generating true team success. When the Raiders finally got over the hump and won the Super Bowl in 1976 they had incredible talent to be sure, but the team’s standout Pro Bowl talent didn’t come from skill positions.

Outside of quarterback Ken Stablerand tight end Dave Casper, the Raiders’ other Pro Bowlers all played non-glamour positions. There was Art Shell at left tackle, Gene Upshaw at left guard, punter Ray Guy, and outside linebacker Phil Villapiano. These weren’t the kind of world-beating positions we associate with dominance in the 1970s. Yet, the Raiders leveraged them to great success.

Contextualizing Madden’s coaching career means understanding the kind of guy he was during the 1970s and comparing to today. He was a man who didn’t have 20 years of experience under his belt before becoming a coach, but a Sean McVay-esque wunderkind who ascended to head coach at the age of 32, immediately becoming one of the best coaches in the entire NFL, then leaving when he was 43.

There’s an alternate timeline where Madden decides to keep going. He doesn’t get sick, and coaches for another 20 years — cementing himself simply as the greatest coach of all time, but robbing us of his broadcasting career as a result.

In the end, Madden’s life went the path it needed to, as we remember a man who brought so much humor, joy and knowledge to our TV screens. But let’s not forget that before he was goofing around on the telestrator and cracking jokes, he happened to be one of the greatest football minds to ever coach in the NFL. That part gets overlooked far too often.