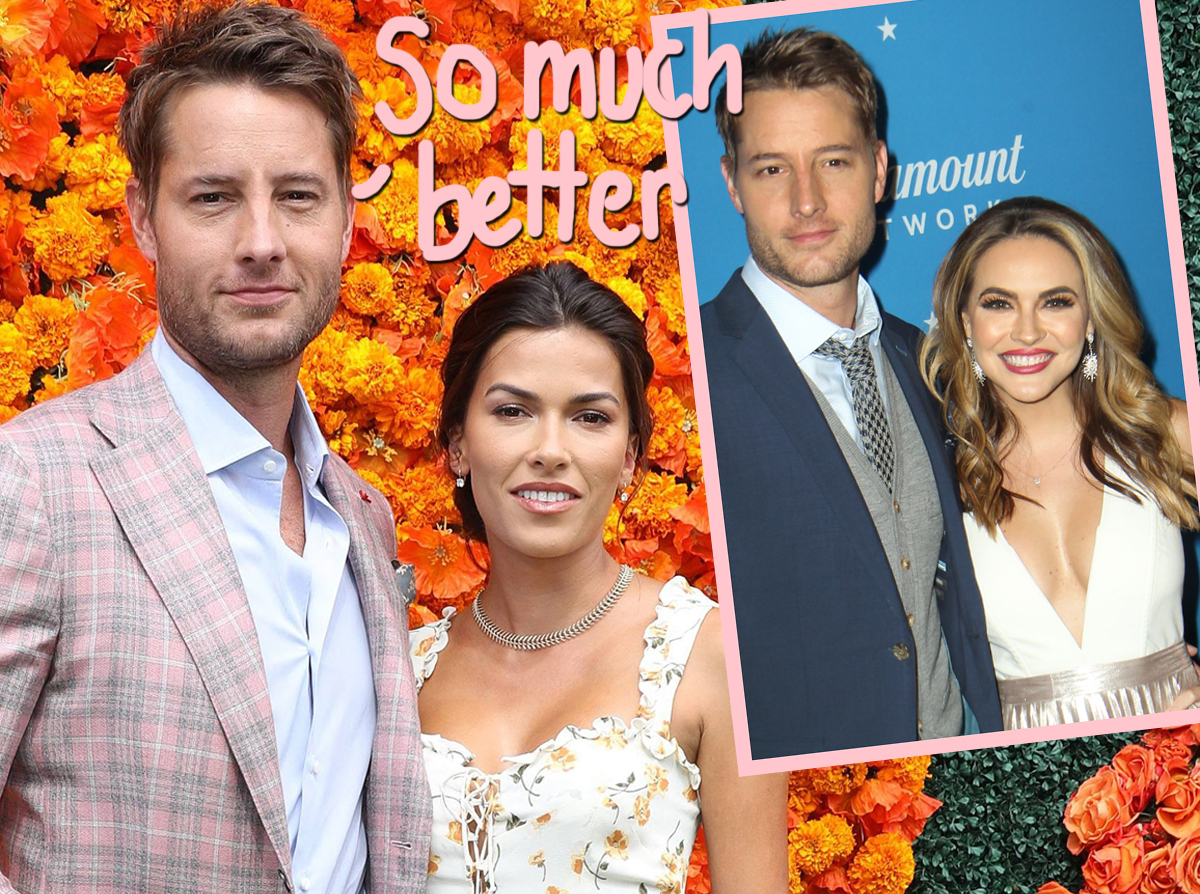 Justin Hartley is throwing so much shade here, we just caught a chill.

The This is Us star is currently on his third marriage to Sofia Pernas, after having previously been married to Lindsay Korman from 2004 to 2012 and Selling Sunset’s Chrishell Stause from 2017 to 2019. The latter relationship ended less than amicably, and Chrishell revealed on the Netflix show that Justin had texted her to let her know about the divorce filing less than an hour before the press found out.

Related: There Are Thirst Traps & Then There’s What Chrishell Is Doing Here!

The actor began dating Sofia not even six months after the breakup, and the couple tied the knot in May 2021. And although it has yet to be one year of wedded bliss, he wants everyone to know things are going WAY better than his previous relationship. In an interview with Haute Living, the 44-year-old gushed:

​​”It’s incredible when you’re not forcing things. It doesn’t have to be that hard. You just meet the right person and you just go, ‘Oh, this is amazing. It’s just so wonderful!’ You’re so attracted and so attached to this person. You just love this person so much.”

As a matter of fact, Chrishell didn’t think their six-year relationship (including two years of marriage) was “that hard” at all. On Selling Sunset season 3, she reflected on the breakup:

“Sometimes it can be hard, I mean I don’t think it should more hard than easy at all, but that’s why I’m so confused… I didn’t feel like that balance was off. When I think of marriage, I think of, you know, you work on things with people if they’re not perfect — no one is, you work on it. You talk about it. You don’t throw it out… you don’t go out looking for greener grass. Sometimes, you have to water the grass that you have, and that’s what marriage is.”

Well, the Smallville alum is here to say that the grass is indeed greener with Wife #3. He told Haute Living that “everything is easier with her in my life.” He added:

“Even though we’ve only been married a few months, it’s hard to remember what it was like without her. When I re-met her, I just knew. It’s so interesting about the human heart and human mind. It’s not a codependency; I’m just at peace with myself. I feel loved and I feel appreciated. I know she feels the same way. We just have a really great relationship and a really terrific family. It’s healthy and it’s wonderful.”

You’ll notice Justin used the phrase “re-met her” — that’s because he and his ex-wife both co-starred with Sofia on The Young and the Restless (Chrishell said on Selling Sunset that she knew Sofia “pretty well” back in the day). Before that, Chrishell had co-starred on All My Children with his other ex Lindsay, whom he first met when they co-starred on Passions. Apparently the soap opera dating pool is VERY small.

Related: Why Chrishell Broke Up With BF Jason Oppenheim

Anyway, it does sound like things are going great for the father of one and his new lady love. He shared:

“I learn from her. She speaks five languages. She’s brilliant, she’s incredible, she’s fun to look at. Everything about her is amazing — she’s just hilarious. She inspires me to want to be a better man. … I want to rise to the occasion because she’s so great. She does make me want to be a better person, and [this kind of love] certainly does complete me.”

Glad he found his other half, we suppose — but he didn’t have to throw Chrishell under the bus like that! Or do you think differently, Perezcious readers?? Sound OFF in the comments (below)!