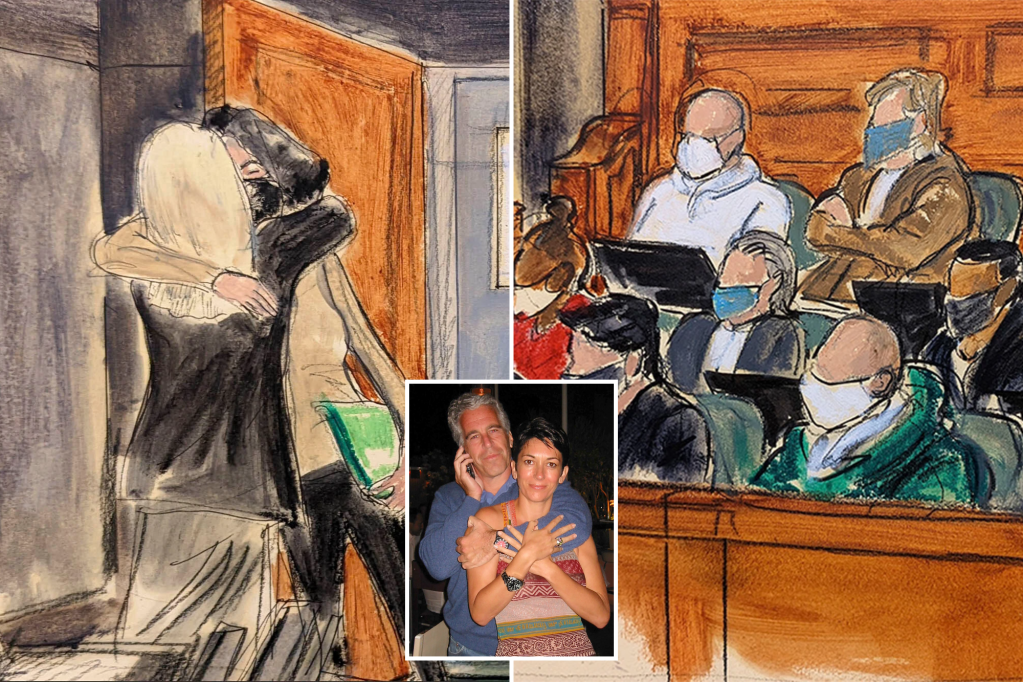 Ghislaine Maxwell was convicted of five of the six charges against her at her sex-trafficking trial Wednesday evening – capping a stunning fall for the disgraced British socialite, who groomed underage girls for financier Jeffrey Epstein to abuse while mingling with the rich and famous.

Maxwell’s lawyers argued in closing statements in Manhattan federal court that she was an innocent scapegoat in the Epstein saga – while prosecutors labeled her a “sophisticated predator” who exploited young, vulnerable girls.

Since the start of Maxwell’s trial Nov. 29, prosecutors sought to portray her to jurors as inexorably linked to Epstein, including in his pursuit of underage girls to sexually abuse.

“Maxwell and Epstein were partners. They were partners in crime who sexually exploited young girls together,” Moe said.

Over the course of three weeks, prosecutors called two dozen witnesses, including four accusers who detailed how Maxwell groomed them for abuse by Epstein – and how she at times participated in the sexual contact.

The first accuser to take the stand, who testified under the pseudonym “Jane,” told the jury that she met Maxwell and Epstein when the pair approached her at a Michigan arts camp in the early 1990s when she was 14 years old.

From there, the teen was groomed for abuse at Epstein’s Palm Beach mansion by Maxwell, who exposed her to nudity and sexualized conversations in an attempt to normalize the behavior, prosecutors alleged.

“She would ask me what I was up to, if I had a boyfriend,” Jane testified, adding that Maxwell claimed to her about dating, “Once you f–k them, you can always f–k them again because they’re grandfathered in.”

At Epstein’s mansion, Maxwell and the twisted millionaire money man abused the teen together and in group sex sessions with other women, Jane testified.

In 1994, Jane said, the financier and Maxwell led her upstairs to his bedroom, moved her over to the bed and “took their clothes off.

“They started to sort of like fondle each other,” she said, adding that they were “casually giggling” as she stood there.

“He asked me to take my top off,” she said of Epstein, who killed himself behind bars while awaiting trial in Manhattan in 2019.

Maxwell and Epstein repeated this “playbook” to lure in other underage girls for him to abuse, including the three other victims who testified at trial, prosecutors said.

In most cases, the pair preyed on vulnerable girls from single-parent homes, prosecutors said.

Another accuser who testified using her first name Carolyn said she was introduced to Maxwell and Epstein at age 14 through Virginia Roberts Giuffre, a teen she knew from her West Palm Beach neighborhood.

Carolyn had been sexually abused by her grandfather starting when she was 4 years old and raised by her mother, an alcoholic.

Over a number of years, Carolyn massaged Epstein more than 100 times at his Palm Beach estate – and “something sexual happened every single time,” she told jurors.

Maxwell would call her or her boyfriend at the time to schedule the massages, Carolyn added.

At least once, Maxwell groped the teen as she was getting undressed and preparing to give Epstein a massage in the Florida home.

“She came in and felt my boobs and my hips and my buttocks,” Carolyn said, her voice breaking as she recalled the touching.

Maxwell told her that she “had a great body for Mr. Epstein and his friends. She just said that I had good body type,” she added.

At the same time Maxwell and Epstein were luring these girls away from their families to sexually abuse them, the older pair was socializing with the rich and elite.

Another accuser who testified under the pseudonym Kate said Maxwell touted her relationships to the rich and powerful as she lured her into Epstein’s orbit.

The disgraced socialite “seemed to know everybody,” Kate told the jury.

“She was friends with Prince Andrew, friends with Donald Trump. Sometimes their names would just come up or she would be talking on the phone about them with me present,” she said.

It was precisely because of these connections why Epstein and Maxwell felt they could get away with their crimes for so long, prosecutors said.

That all changed with Maxwell’s arrest and at her trial — as four of her accusers, now grown women, pointed her out to the jury as the woman who facilitated their sexual abuse.

“The defendant never thought that those teenage girls would have the strength to report what happened to them. In her eyes, they were just trash, beneath her,” Assistant US Attorney Maurene Comey told jurors in her rebuttal statement at the close of the trial.

“Who would believe Jane or Kate or Carolyn or Annie over Ghislaine Maxwell and Jeffrey Epstein, who rubbed shoulders with presidents and celebrities and business leaders?” Comey said.

“But the defendant didn’t count on those teenage girls growing up into the women who testified at this trial; women who would be willing to take that stand and tell the truth about what happened,” Comey said.