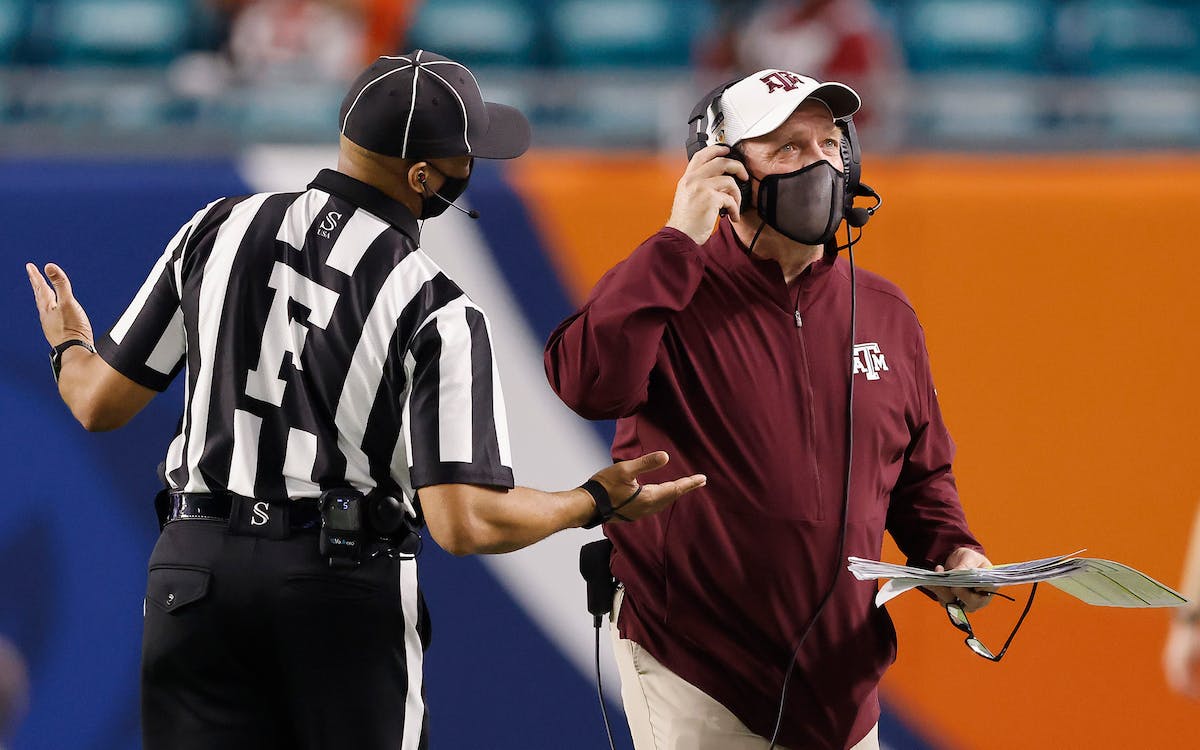 Texas A&M head football coach Jimbo Fisher would have been nuts to allow his Aggies to play the Gator Bowl. In the end, it wasn’t a complicated decision. This wasn’t just about a surge of COVID infections, although that surely played a role. Because A&M’s announcement came ten days before the game, other factors must have been in play.

Rather, the abrupt end to Texas A&M’s season offers a front-row seat to college football’s shifting balance of power. College athletes—powerless and exploited for about a century—are flexing their muscle in ways that for decades were either explicitly forbidden to them, constrained by norms within the world of NCAA sports, or both. For some teams, headlines about COVID case rates have overshadowed the structural issues also contributing to this week’s rash of bowl cancellations and last-minute matchup changes. And unlike the pandemic, which will subside someday (sooner than later, we hope), the other elements at play aren’t going away.

To review: Last summer, college athletes won the right to make money off their names, images, and likenesses (NIL). This changed the infrastructure of college sports so dramatically that we won’t be able to assess its full impact for at least a few more years.

For example, Alabama quarterback Bryce Young had signed endorsement deals worth more than $1 million before he’d ever started a game, according to his coach, Nick Saban. How about something closer to home: the University of Texas at Austin landed a top-five recruiting class headed into next season, thanks in part to support from Horns with Heart, a nonprofit booster group whose first NIL initiative, known as the Pancake Factory, promises to pay every UT offensive lineman $50,000 per season.

All of a sudden, players can line their pockets with some of the cash they’ve been generating for Dear Old U. Previously, their share of the pie would be approximately—wait for it—zero.

And if they don’t like the cards they’ve been dealt at Dear Old U, they’re welcome to shop around for better offers—whether that means opportunities on the field or on the business side. That’s how LSU’s former starting quarterback, Max Johnson, beat Texas A&M in the final game of the regular season, then transferred to—you guessed it, didn’t you—Texas A&M.

Finally, dozens of star players are weighing the benefits of participating in increasingly meaningless bowl games and risking injuries that could cost them millions in NFL earning potential.

This shifting dynamic may have been the final straw in A&M’s decision not to play Wake Forest in Friday’s Gator Bowl. At least six prominent Aggies, including running back Isaiah Spiller and tight end Jalen Wydermyer, opted out of the Gator Bowl to focus on preparing for the NFL draft.

Before you clutch your pearls and wonder why these kids don’t play for the sheer love of their school, here’s a reminder that big-time college football has always been about money. The difference now is that the players are getting a small share of it.

And this season’s upheavals are just the beginning. At some point in the not-too-distant future, a player who has just earned millions wearing an A&M or Texas or Baylor jersey is going to opt out of a bowl game rather than risk injury.

No team better exemplifies this new world than Texas A&M. In addition to the opt-outs, starting quarterback Zach Calzada entered the entered the transfer portal. After a disappointing season in College Station, he may have read the tea leaves and seen the possibility of being buried in the Aggies’ quarterback depth chart next fall.

The NCAA’s transfer portal, created in 2018, offered him the chance to change schools and be eligible to play next season. (Previously, transfer athletes would be forced to wait one season and lose a year of eligibility after changing schools.) But even if Calzada was unlikely to begin the 2022 season starting under center for the Aggies, he was the team’s only healthy scholarship quarterback heading into bowl season.

This isn’t how the Aggies envisioned things would play out. Throughout the spring and summer of 2021, the team and its supporters spoke openly of national championship goals and began the season ranked number six in the Associated Press Top 25.

Fisher was so confident that he playfully taunted Alabama coach Nick Saban, telling a Houston Touchdown Club gathering in May: “We’re going to beat his ass when he’s there. Don’t worry.” (Saban responded: “In golf?”)

Fisher did indeed become the first former Saban assistant to knock off the master, with the Aggies winning 41–38 at Kyle Field in October. But the Aggies lost to Ole Miss and LSU down the stretch to finish a disappointing 8–4. Add the mental hurdle of underachieving to the list of reasons why skipping the Gator Bowl could have appeared advantageous to A&M.

The team probably could have navigated its way through a growing number of COVID infections at a time when NCAA officials are debating how much risk asymptomatic players actually pose. When it came down to it, though, the pandemic wound up providing a more reasonable explanation for pulling out of the Wake Forest matchup than “this game just doesn’t make sense for us right now.”

It’s about perception. In the weeks since the Aggies ended the regular season with a loss to LSU, Fisher had accomplished something few other coaches could. He restored optimism in the hearts and minds of A&M fans. He did this without playing a single game, and when he was done, plenty of Aggie diehards barely recalled that their team fell far short of expectations this season.

Just about the time some folks in College Station may have begun to doubt Fisher, the coach signed the top-ranked recruiting class in the country and one of the highest-rated groups ever brought to Kyle Field. In what felt like the blink of an eye, Fisher had the A&M faithful talking about next season. Who cares about the 8–4 campaign that just passed? Next season could be one of the best ever!

The A&M program entered bowl season with so much positive momentum for next year that it made no sense to bring an undermanned roster to the Gator Bowl and risk an embarrassing loss to Wake Forest. Say this for Jimbo Fisher: he understands branding, and this game offered very little upside for the image of his program or for his reputation as a coach making close to $10 million a season.

“Opt-outs are here to stay,” he recently told reporters. That’s why some coaches are pushing the NCAA to expand the College Football Playoff beyond its current four-team format. The thinking is that few players would walk away from their teams with a national championship on the line.

Another, perhaps more practical solution would be to pay players for participating in bowl games. This idea doesn’t seem to have any traction among administrators at NCAA schools, but neither did NIL deals until states began passing their own NIL laws and schools in other states started to worry they might be left behind.

As for the Gator Bowl, it found a willing dance partner for Wake Forest in Rutgers. Out in El Paso, the Tony the Tiger Sun Bowl persuaded Central Michigan to step in and play Washington State after COVID sent Miami home. Central Michigan was available because Boise State backed out of the Arizona Bowl.

Washington State badly wanted to play. “Our team is in El Paso and willing to play any opponent,” coach Jake Dickert tweeted. “Our team just wants one more chance to finish this storied 2021 season.”

Not every school was that anxious to improvise. When COVID infections forced Virginia to withdraw from its game against SMU in the Fenway Bowl, the Mustangs—and some other schools—waved off feelers from the Sun Bowl.

Back in College Station, it’s all the success Jimbo Fisher has had on the recruiting trail that gives A&M fans reason to believe their team might be able to withstand future bowl season opt-outs and transfers. In addition to having the top-rated recruiting class in 2022, Fisher has put together four consecutive top-ten classes for the Aggies. That much talent might provide just enough depth to hold off the wave of late-season roster changes that are now a fact of life in college football.