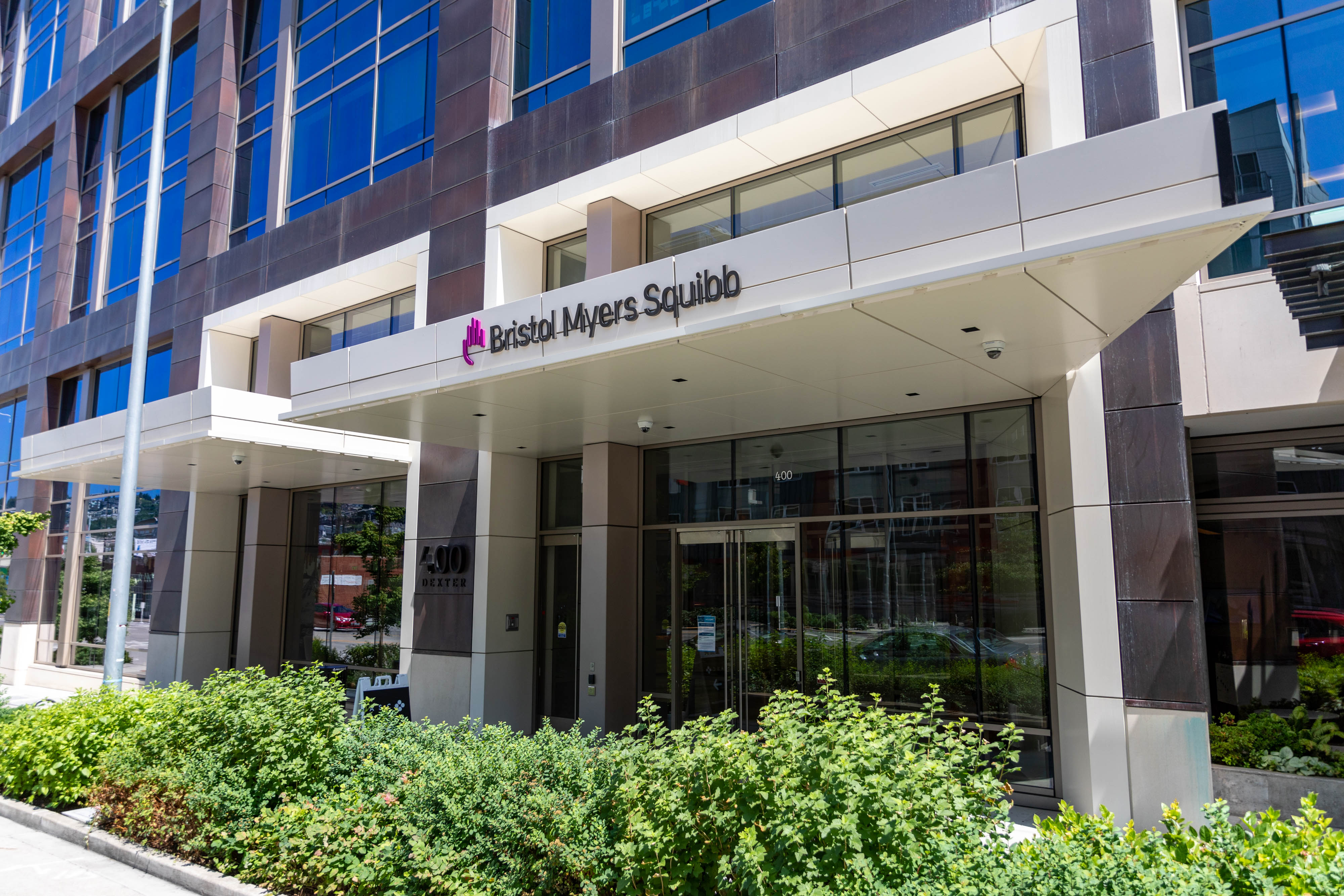 Pharmaceutical giantBristol Myers Squibb has been quietly growing in the Seattle area.

Since acquiring Celgene and its Seattle operations two years ago, BMS now has more than 1,240 employees in the region, hundreds more than when the deal was announced.

BMS brings big pharma clout and a chunk of its $9.2 billion annual R&D budget to Seattle’s prospering biotech ecosystem, where global drug anchor companies have been as rare as bigfoot since Amgen shut down its Seattle hub five years ago.

Only Bothell, Wash.-based Seagen, with more than 2,500 employees worldwide, may top BMS in size among biopharma companies in the Seattle area. BMS has more than 150 open positions in the region, jostling with Sana Biotechnology, Umoja Biopharma and other cell and gene therapy biotech companies for workers.

BMS’ Seattle-area outpost, devoted to cell therapy and immuno-oncology, is one of about a dozen BMS R&D centers worldwide. Seattle BMS scientists are developing new ways to attack tumors by harnessing cells of the immune system and they are improving on two “CAR T” cellular therapies approved for certain blood cancers, Breyanzi and Abecma.

Breyanzi emerged from research at Seattle’s flagship cell therapy biotech company, Juno Therapeutics, which Celgene acquired in 2018 in a multi-billion dollar deal. BMS continues partnerships that Juno forged with Fred Hutch and Seattle Children’s Research Institute when Juno spun out of these institutions, and it is building new biotech collaborations to develop the next generation of therapies.

Leading BMS’ Seattle effort is Teresa Foy, who previously helmed Seattle’s Celgene operations and rose up through the ranks as an executive at two small Seattle biotech startups, VLST Corp and Oncofactor.

“Our presence here is strong,” Foy told GeekWire in an interview. “We’re hiring and we’re growing.”

BMS’ footprint in the region includes a 266,000 square foot Seattle R&D facility built by Juno, and a manufacturing facility in Bothell, where the company manufactures Breyanzi.

The Seattle operation oversees clinical trials for Breyanzi and other cell therapies. BMS, for instance, aims to expand the eligible patient group for Breyanzi, which is currently approved for adults with certain types of lymphoma who have relapsed or do not respond after two front-line therapies. BMS recently released data in support of expanding the therapy to patients at an earlier stage of treatment.

BMS aims to reduce the steep cost of manufacturing CAR T cells, which involves engineering a patient’s own cells to attack their tumor. One option is to instead enable “off-the-shelf” therapies, derived from healthy donor cells or even stem cells.

The next generation of cellular therapies are also being built in Seattle. The company is engineering CAR T cells to overcome a hostile tumor environment and to recognize more than one molecular target. Such research aims to counteract the development of resistance to treatment and expand the therapy to solid tumors. BMS is also advancing “TCR-engineered” T cells which can target molecules inside tumor cells, not just on the cell surface as with CAR T cells.

Meanwhile, BMS is looking beyond cellular therapies at “immune cell engagers.” These are agents that interact with immune cells and direct them to recognize and attack cancer cells. BMS is testing such agents in phase 1 clinical trials for blood cancers and solid tumors.

Other cell and immune therapy companies pursue similar aims, but BMS brings multiple research strategies under one roof, bolstered by its strong clinical and manufacturing capabilities and web of academic and industry collaborations.

We talked with Foy about the company’s growth and its vision for treating cancer with the immune system.

The interview with Foy below has been edited for clarity and brevity.

GeekWire: What do you think has kept BMS in the Seattle region?

Bristol Myers Squibb executive Teresa Foy: With the acquisition, BMS hired Celgene president Rupert Vessey as its president of research and early development. They really liked his research model, and BMS needed a kind of refresh on their research strategy. Vessey had helped build a distributed research model, with different innovation hubs, and each of those hubs has a different area of focus.

Part of what BMS recognized in the acquisition was that this was an important concept to keep intact, not just for Seattle, but for the other hubs as well. That was not traditionally how BMS operated their research. They were very centrally located in New Jersey, but now they’ve sort of embraced this model. It leverages different locations for hiring and also allows you to tap into the ecosystems of local regions for academic expertise, other small companies to partner with, as well as the talent.

BMS wants to maintain the core expertise that’s here and the critical mass of people to do cell therapy development. It takes a while to build that expertise and depth of experience. Being able to retain that and grow that here in Seattle is a real strength for us.

How does the cell therapy ecosystem in Seattle bolster your work, and do regional companies benefit as potential collaborators?

Foy: We certainly have a lot of academic history here in Seattle with Seattle Children’s, with Fred Hutch, and we still maintain those relationships. The talent pool has been shared across the region, and that’s great for the ecosystem in Seattle.

We have partnerships and equity investments in some of the local companies [BMS investments include Presage Biosciences, Zymeworks, Silverback Therapeutics, and Lyell Immunopharma, which are based in the Seattle area or have operations there]. But we don’t currently have any large collaborations with any current [local] companies. Part of the reason is some of our programs are competitive with each other. The technology and innovation cycle is continuing and we continue to have discussions with Sana, Lyell and other new companies.

We have partnerships with people all over the country and all over the world. But Seattle is a kind of center of excellence for cell therapies. Certainly, people around the country recognize that there was a strong foundation built here with Juno that expanded, and that has now seeded a bunch of new companies. I think that’s an advantage for all of us because it brings talent here. It brings great scientific discussions and opportunity for collaboration.

You’re working in a field at the cutting edge of cancer research. What are you excited about for the future?

Foy: I do think that the progress will be exponential in the next five to 10 years because there’s been so much innovation in technology and in bioinformatics, machine learning and artificial intelligence, which can help inform all the data that we gather from our patients. We can learn so much to feed back into improving the first generations of cell therapies. The technology is advancing things at kind of this frantic pace.

I’m excited for us to be able to expand what we’ve learned in hematology, lymphoma and myeloma into solid tumors. And then we’ll have to also apply what we learned in the immuno-oncology space with checkpoint inhibitors [immune modulating cancer drugs like BMS’ nivolumab]. What resistance mechanisms prevent checkpoint inhibitors from having longer effects or what prevents some patients from responding? Some of those same themes are holding true for cell therapies.

How are your research collaborations building the next generation of cellular therapies?

Foy: We have a partnership with Arsenal Bio, which is developing “logic gates” for solid tumors [enabling activation of therapeutic cells only within a tumor or under other conditions]. Obsidian therapeutics does regulated expression of proteins — we’re adding particular proteins to our cell therapies that we can regulate to turn on just when we want them to, primarily for solid tumors to overcome tumor environment challenges. And then we have a partnership with Immatics, which has identified engineered T cell receptors to solid tumor targets, and we’re putting those in our in our cell therapies. So, there’s lots going on with the next generation.

We’re working on a couple of different approaches for off-the-shelf cell therapies. Allogeneic approaches [therapies from donor cells] are in the queue for both CD19 and BCMA [the targets of Breyanzi and Abecma]. And then a long ways off, we’re looking at other things like iPSC [stem-cell] derived therapies. We don’t yet have a partnership there, but we’re working on exploring that.

Can you tell us about your other research efforts?

Foy: About 30% of our portfolio is focused on immune cell engagers. Those complement the cell therapy modality. They have some advantages in that they could be off the shelf, maybe give access to more patients. But obviously, you can’t engineer as many things into those biologics as you can into a cell therapy. So it’s kind of a nice breadth for our portfolio to have optionality with both of them.

Any highlights from your clinical programs?

Foy: Both CD19 and BCMA CAR T cells [Breyanzi and Abecma] are in a next generation of manufacturing. And those essentially have a similar design but a different manufacturing process [that enables cells to persist longer in the body]. We entered a CAR T cell against a novel target, GPRC5D, for multiple myeloma, and that is in phase 1 now. Behind that we have an ROR1 CAR T cell — we’ll be enrolling patients early next year for that program, and that will be in chronic lymphocytic leukemia initially and then solid tumors subsequent to that.

What has it been like for you moving from small biotech companies to Celgene and then BMS?

Foy: I grew up as a bench scientist and gradually became a leader and then a chief scientific officer. I thought, ‘I’m not sure I’m going to like the big company,’ but I found that doing good science is doing good science, regardless of whether you’re in a small company or a big company. But being able to have resources to do it really well, and to actually see patients benefit from it, that was a huge, rewarding part.

Foy: We’re really excited about segueing into solid tumors in the next five to 10 years and also looking at ways to make these cell therapies more affordable and off-the-shelf donor-derived. I think that’s really the next generation of where the cell therapies will go.

We’re also really proud of the community outreach we’ve done and our STEM efforts in Washington state. They are a really important part of our mission here [BMS is involved in outreach programs at the Pacific Science Center and other efforts]. Our staff is really excited to help mentor and educate the next generation of young scientists and hopefully keep the Seattle and Washington state ecosystem thriving with scientists of the future.