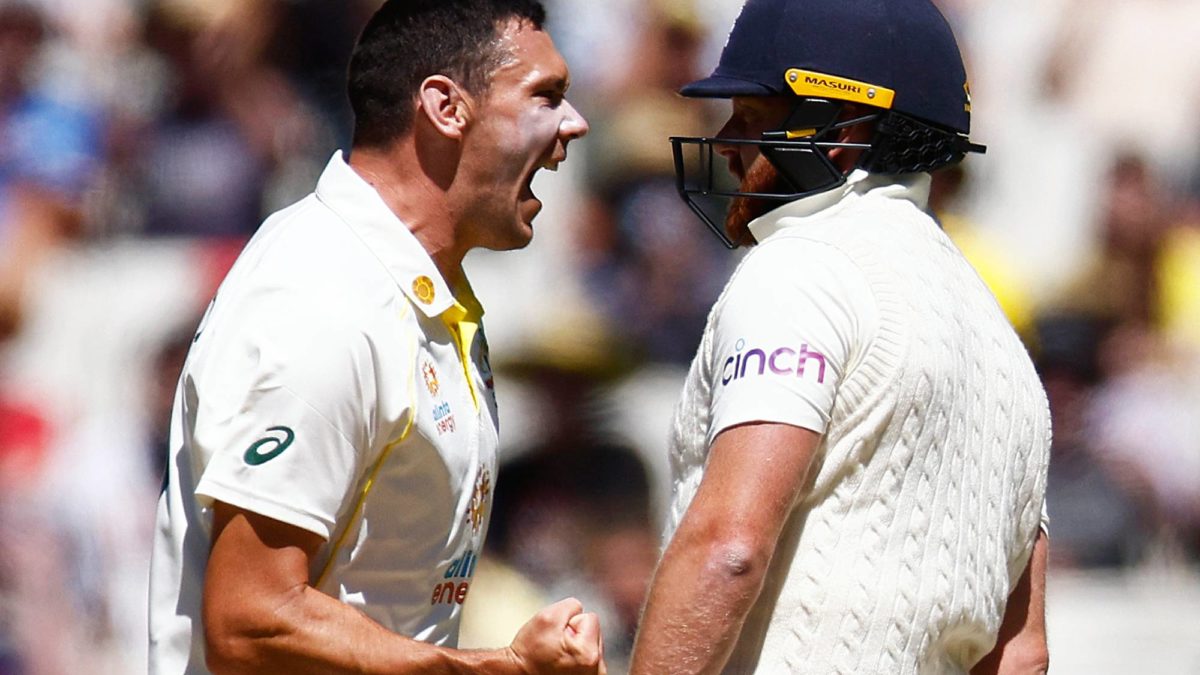 The Ashes will remain in Australia’s possession for another couple of years after their MCG mauling of England. Here’s how the players from both teams rated.

They took less than one session more than two days to do the deed with the touring side’s meek surrender for 68 on Tuesday one of the more insipid efforts from a team for quite some time.

Scott Boland had the dream debut to end all dream debuts while Mitchell Starc and Pat Cummins also delivered a master class in pace bowling.

For England, yet again Joe Root tried valiantly but there is only so much one batter can do without any reliable support while James Anderson and Mark Wood at least gave the locals plenty to think about when they were in action with ball in hand.

Here are The Roar’s player ratings for the third Ashes Test.

The opener finally looked at home at Test level and didn’t quite cement his spot but earned at least another couple of chances with his 76, which proved to be the highest score of the match.

He had a couple of slices of luck but deserved some after falling to a couple of spectacular Jos Buttler catches in Adelaide.

His breezy 36 late on day one was not his best display by a long way but it put England on the back foot even further after their pathetic batting effort.

Warner is building to a big innings and it wouldn’t surprise if he reaches triple figures on his home turf at the SCG next week.

A rare failure for the Queenslander after being crowned pre-game as the ICC’s top-ranked batter.

He got a beauty from Mark Wood which took the shoulder of his blade on one and flew to slip.

He looked a little unsettled by James Anderson’s seam movement in his 16 and inside-edged the veteran paceman onto his stumps.

By his own lofty standards, Smith is in a rut and hasn’t been able to reproduce his past glories since his stupendous 2019 Ashes series, which is probably due in large part to the scarcity of top-class red-ball cricket in the past couple of years.

What you see is what you get with the South Australian left-hander.

He is always going to seem fluid when he gets to the crease and will often give the bowlers a chance to snare him early.

When it comes off it’s glorious, as we saw in Brisbane with his swashbuckling ton. But you have to take the good with the bad and there will be plenty more innings from Head like his 27 in Melbourne where you’re left scratching your head, so to speak, about Travis and his shot selection.

The big West Australian is yet to make his mark on this series with the bat and again failed, out for 12 to a Jack Leach delivery which the video review ruled was just hitting leg stump.

He’s more than handy with the ball though, and his dismissal of Ben Stokes in the first innings was crucial. And he got the added bonus of chiming in for the last wicket of the match to seal the series, which will be replayed on loop throughout the cricketing world.

Near faultless again with the gloves – he does have a tendency to hesitate a fraction for catches that split the difference with first slip.

The elite keepers go for those chances no matter what so if Carey adopts that mindset, it will give the opposition even less margin for error.

The skipper blew the doors off England with a devastating first session when he took three scalps to put them on the ropes and they never fought their way back into the contest.

His new-ball spell alongside Mitchell Starc was literally too good. His pace and movement was too much for the out-of-form English top order to lay willow on leather.

Cummins chipped in handy runs with the bat, made astute decisions with his bowling changes and was thoroughly vindicated for his decision to send England in at the toss.

Can you believe there was one small section of the cricket commentariat calling for Starc not to be picked for the first Test?

The NSW left-armer is arguably in career-best form and after taking the big wickets of Joe Root and Jonny Bairstow in the first innings he put a dagger through any hopes the tourists had of setting a challenging fourth-innings run-chase.

Starc’s used his natural angle superbly against right-handers, as evidenced by his removal of Zak Crawley in the second innings.

The ball that thudded into Dawid Malan’s pads next delivery was too quick for the English leftie, whose bat was nowhere near the ball when it trapped him.

And just when Stokes looked like he was getting going on day three, Starc stepped in to rattle his timber and snuff out any hope of an unlikely fightback.

It’s hard to be too harsh on the GOAT as he was not needed in the second innings as the Poms capitulated for 68.

His three wickets from 14 overs in the first innings were exactly what Australia needed. The gulf in class in the spin department between the two sides is enormous.

If you submitted the story of Boland’s Test debut as a Hollywood script it would be sent back with red pen saying ‘too far-fetched, wouldn’t happen in real life’.

But truth is stranger than fiction.

Boland bowled well without too much luck in the first innings but was rewarded with the wicket of Mark Wood.

His two wickets in his lone over before stumps on day two had the MCG pumping in scenes reminiscent of DK Lillee and SK Warne in their prime.

And then to slice through England again on day three to finish with the astonishing figures of 6-7, well you can’t make that kind of stuff up.

Fittingly, the second Indigenous male to play Test cricket was a worthy recipient of the Johnny Mullagh Medal in honour of the 1868 trailblazer.

He was on a hiding to nothing and that’s pretty much the return he gave England.

You have to ask why he was selected for this tour after averaging 11 in seven Tests this year.

Cummins was bamboozling him throughout his 12 on day one and he never looked comfortable in the second innings so it was no surprise when Starc found his edge with just five runs against his name.

Scores of zero and seven continue a wretched first tour of Australia for the opener. He was probably lucky to keep his spot ahead of the more experienced Rory Burns but it’s a coin flip for the English selectors about who will face the new ball in Sydney.

Whoever they pick, Dawid Malan and Joe Root may as well accompany them to the middle because they’ll be taking guard soon enough.

Malan had been having a decent series up until this Test.

Cummins was too good for him in inducing a nick to Warner at slip on 14 in the first dig and when Malan saw the replay of Starc’s opening delivery on the MCG big screen it was the first time he’d actually laid eyes on it.

An even 50 on day one promised to be so much more but yet again Root played outside his off stump at a ball he could have watched sail by.

His 28 in the second innings was only 12 runs less than the rest of his beleaguered side in their pitiful 68.

Root is trying to rouse his troops, he’s supporting them and getting a decent return from his bowlers but he and his side have a defeated air about them. They look like a team that knows they have little to no chance of winning from the get-go. And they’re not wrong.

The sad thing for England is by the time Stokes has got enough cricket under his belt to get back in form, the last Test will be just about over in Hobart.

He’s trying everything he can think of with bat in hand to regain his touch – batting deep in the crease, walking towards the bowlers, being patient but it’s not working.

His shot to point to lose his wicket to Cameron Green in the first innings for 25 was a schoolboy error and then Starc castled him for 11 on day three.

Brought into the side for Ollie Pope, at least he looked intent on taking the fight to the Australians.

He showed some intent with his 35 in the first innings but was all over the place before Boland blasted him away for five on day three.

With Stokes struggling for runs it might be worth putting Bairstow in at five in Sydney.

His keeping was nowhere near as woeful as his Adelaide effort but he missed a tough stumping chance down leg side when Marcus Harris was on 63. Fortunately for him it only cost England another 13 runs.

Buttler’s dopey decision to try and hit Lyon out of the ground shortly before tea on day one is exactly the kind of stupidity Root has been trying to drum out of his side.

Took two wickets in Australia’s lone innings but could have easily had another two or three.

He constantly troubled all Australia’s batters with his genuine pace.

Can anyone outside of England’s alleged “brains trust” explain why he was not picked in Adelaide?

He’s looking tired after toiling away in three straight Tests and it wouldn’t surprise if he makes way for Stuart abroad at the SCG.

Robinson did his job with the ball, claiming the wickets of nightwatcher Nathan Lyon and Travis Head, a reliable third seamer supporting Wood and James Anderson.

Former Australian captain Ian Chappell summed it up in typically blunt fashion during ABC commentary when he said he did not think Leach was up to Test level.

If the left-arm spinner is the best tweaker in England then it’s a sad state of affairs.

Root immediately set defensive fields as Leach darted in at leg stump. He won a marginal LBW review to get Green out but that was his only highlight.

This was a perfect encapsulation of why Anderson has taken more Test wickets than any other Englishman in history.

He gave the Australian batters absolutely nothing, but trouble.

It’s a sign of their respect for the 39-year-old that they didn’t take him on as he continually pitched the ball on an awkward line and length to claim 4-33 from 23 masterful overs.