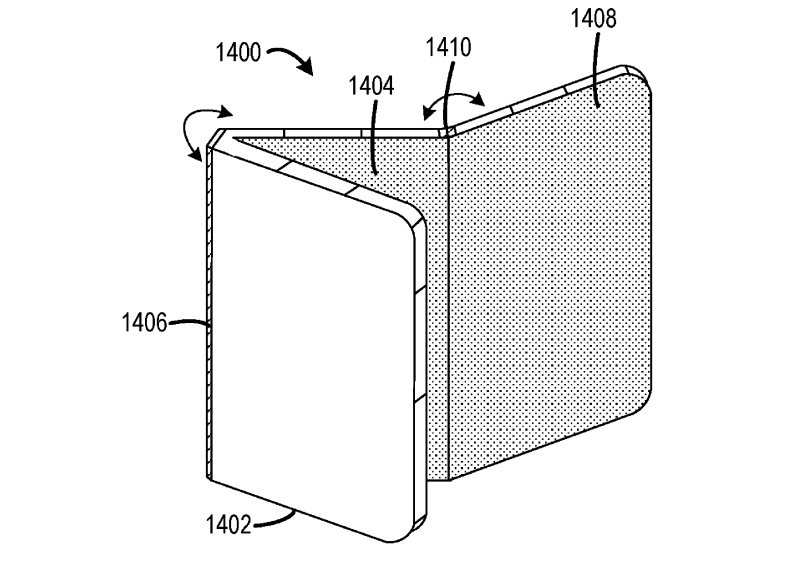 Microsoft Corp. has filed a patent for a three-panel foldable device that would presumably be a Surface Trio if it ever came to market

Discovered by Patently Apple, the patent was first filed in June 2020 and was only made public last week by the U.S. Patent and Trademark Office. The patent covers what Microsoft describes as a “multi-panel display device” with three displays and two hinge areas – the Surface Duo but with an extra screen.

One of the main differing features from the Surface Duo, other than the obvious three screens, is that the third screen would be folded to the front of the device. With the existing Duo, typically, a user would fold the device closed, meaning they would have to open it to see details and interact with the device. By comparison, other foldable smartphones often include an external screen that allows users to access information and interact with the device.

Microsft attempted to address the issue with the Surface Duo 2, launched in September, through the inclusion of the “Glance Bar.” The innovative feature shows incoming calls or messages on a small strip that sits on the device’s hinge and displays information such as time, incoming calls and messages. However, that’s no replacement for an external screen.

Microsoft revealed the Surface Neo alongside the Surface Duo in October 2019 but it did not come to market alongside the Duo in 2020. The Neo was meant to be a foldable tablet that was planned to run a version of Windows that was dubbed at the time Windows 10X. That version of Windows was subsequently scrapped earlier this year, with much of its design work finding its way into Windows 11.

The Surface Neo has never been canceled and could still be being developed, but it’s nearly in the territory of vaporware as of the end of 2021.

As the tech world moves into the new year, whether Microsoft could launch a Surface Trio and even the long-await Surface Neo is one of speculation and guesswork. With Redmond liking to push the boundaries with its high-end hardware, it’s certainly a possibility that the devices could appear in 2022 or even in the years following.