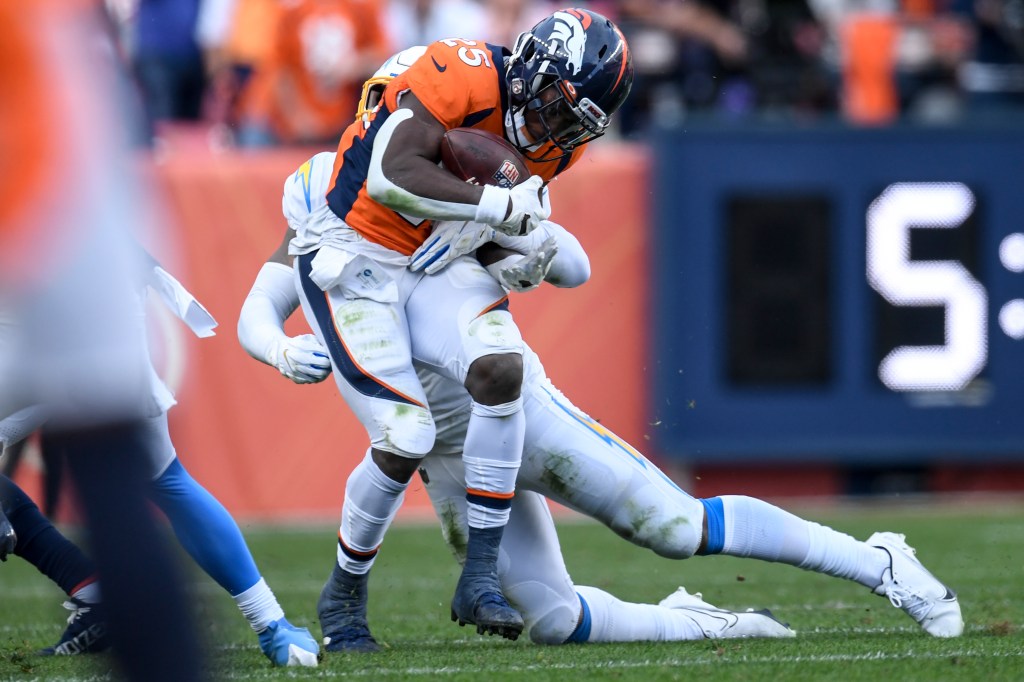 The Broncos (7-8) are playing to avoid a fourth consecutive losing season and the Los Angeles Chargers (8-7) need to win and get some help to stay in the AFC wild-card race. Here are three talking points for Sunday’s game in Los Angeles:

Seven Chargers players have at least three touchdown catches, the most of any NFL team. Tampa Bay has six players and four teams — Cincinnati, Dallas, Green Bay and the Los Angeles Rams — have five players. The Broncos have three (Tim Patrick five and Noah Fant/Javonte Williams three). The Chargers have seven touchdown catches apiece by receiver Mike Williams and running back Austin Ekeler. Williams is out for Sunday (unvaccinated and on COVID-19/reserve list) and Ekeler missed Sunday’s loss at Houston because of the virus but was activated Monday.

The Broncos were 1 of 10 on third down in the loss at Las Vegas and two missed opportunities jumped off the tape. In the second quarter, on third-and-7 from the Broncos’ 11, receiver Jerry Jeudy stopped his route at the six-yard mark and caught Drew Lock’s pass. In the third quarter, on third-and-7 from the Raiders’ 41, receiver Courtland Sutton may have gotten more depth on his route (four-yard catch). “We need to have good awareness of where the yard-to-gain-to-get-the-first-down is, make sure we get it and if we’re short of it, we’ve got to fight to go get it after the catch,” coach Vic Fangio said.

Ahead of the teams’ Week 12 meeting, the Chargers ranked last in rush defense (145.1 yards per game). They have improved only slightly in the last month, rising to 29th (140.3). They are also 29th in yards allowed per carry (4.7). Conventional wisdom is the Broncos will try to establish their running game after managing only 18 yards in the loss at Las Vegas. In its upset win over the Chargers, Houston rushed for a season-high 189 yards (only their second game over 125 yards this year). in Week 12, the Broncos rushed 33 times for 147 yards (4.5-yard average) and two touchdowns in their win over the Chargers.