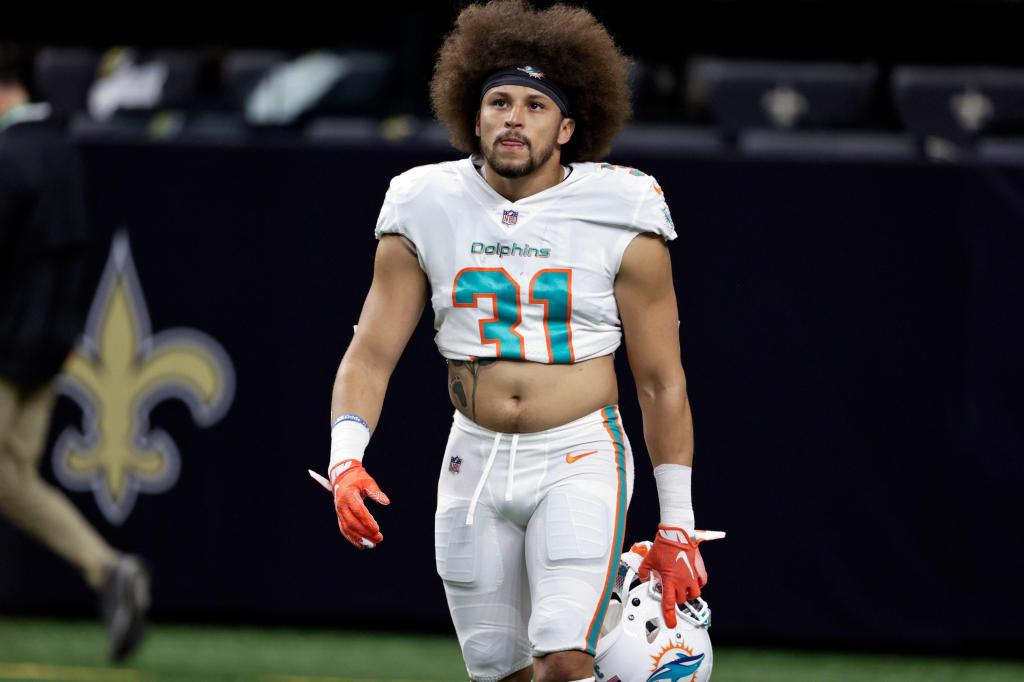 That’s what now separates the Miami Dolphins from a playoff berth that appeared more than improbable when the team was 1-7 and on a seven-game losing streak on Halloween.

The Dolphins let their swarming defense dominate the COVID-decimated New Orleans Saints, mostly played it safe offensively and came out of Caesars Superdome with a seventh consecutive victory, 20-3, on Monday Night Football.

Miami (8-7) has brought itself all the way back in the AFC playoff picture as the conference’s No. 7 seed if the season ended today. The Dolphins control their own postseason fate as winning out over their final two games puts them into the playoffs. With the victory, Miami’s postseason odds jumped from 18 percent to 32 percent, according to FiveThirtyEight.

Dolphins quarterback Tua Tagovailoa went 19 of 26 for 198 yards, a touchdown and an interception.

“Jerry Rice [is] the GOAT,” Waddle said, “so anything with him is an honor.”

Waddle, who already owned Miami’s rookie record for receptions in a season, now has 96 receptions on the year, five behind Anquan Boldin’s NFL-best mark of 101 set in 2003.

Waddle’s third-quarter score extended the Dolphins’ lead to two possessions, 17-3, after a nondescript first half where the only touchdown came on defense. Waddle took a jet-sweep pitch forward from Tagovailoa and punched it in from a yard out.

The Dolphins, largely relegated on offense to that point, opened it up on the nine-play, 86-yard drive. Tagovailoa connected with Mack Hollins deep to the right sideline for a gain of 40 yards as Hollins secured a diving reception with a defender draped on him. Miami play-caller George Godsey then went with a flea-flicker on the next play that resulted in a 21-yard pass to Waddle.

The two-touchdown lead proved to be more than enough with the Dolphins defense rolling. Miami held New Orleans to 158 total yards, 0 for 12 on third downs and recorded two interceptions plus eight sacks.

“Credit to [defensive coordinator Josh Boyer] and the defensive staff putting together a nice game plan, mixing coverages, mixing the fronts,” Flores said. “Did a good job stopping the run, which was a big emphasis.”

In his NFL debut, rookie quarterback Ian Book, starting because quarterbacks Taysom Hill and Trevor Siemian were among the 21 Saints players on the reserve/COVID-19 list, went 12 of 20 for 135 yards and the two interceptions. Miami contained star running back Alvin Kamara to 52 rushing yards on 13 carries and 7 yards on two receptions.

The defensive dominance started on the opening series. Book was intercepted on his second pass by cornerback Nik Needham on a pass tipped by outside linebacker Andrew Van Ginkel, and Needham returned it 28 yards for a touchdown.

“I never had a pick-six ever, in my life,” Needham said. “He was looking at the slot. He was about to throw it before the receiver even broke, so I was just staring at the quarterback and broke. I think the ball got tipped and just landed right in my hands. And it was lit.”

The Dolphins held the Saints without a first down and to minus-2 yards of offense in the first quarter. Jerome Baker had a sack on Book, and Emmanuel Ogbah split one with Christian Wilkins. Miami had three sacks by halftime with cornerback Xavien Howard also credited with one on a Book scramble out of bounds of no gain.

Miami led, 10-0, at the end of the opening period, extending the lead from the Needham pick-six on a 48-yard field goal from Jason Sanders. The attempt was pushed back from the red zone after Tagovailoa was sacked by Marcus Davenport and fumbled backward before left tackle Liam Eichenberg recovered the ball.

It was one of three first-half sacks of Tagovailoa — with the other two coming from Cameron Jordan. The later one pushed the Dolphins out of field-goal range at the end of the first half. Sanders lined up for a 59-yard try and missed to the right after right tackle Jesse Davis was beat in pass protection on third-and-2 from the Saints’ 32. Three different Miami offensive linemen were called for holding penalties.

New Orleans scored a field goal on the preceding possession at the end of an eight-play, 55-yard drive that was aided by a Dolphins’ personal foul penalty.

Safety Brandon Jones had a late interception and a sack, and defensive lineman Zach Sieler added a second-half sack. Ogbah, who finished with two sacks, split another with Raekwon Davis, and Baker got in on another at the same time as safety Jevon Holland.

“It takes all 11, the coverage, the rush married together,” Sieler said of the persistent pressure Miami got on Book.

The Dolphins next play Sunday at the Tennessee Titans (10-5) before wrapping up the regular season against the New England Patriots (9-6) at Hard Rock Stadium on Jan. 9. Winning both guarantees Miami a postseason spot. A split, while still leaving open some possibilities, lessens their chances significantly.

“Emotions are high. Everybody’s excited,” said running back Phillip Lindsay, who ran for 36 yards while Duke Johnson went for 39, both on 13 carries. “It’s a great atmosphere. It’s a tight-knit family here. Everybody grinds for each other, and everybody takes care of each other.”