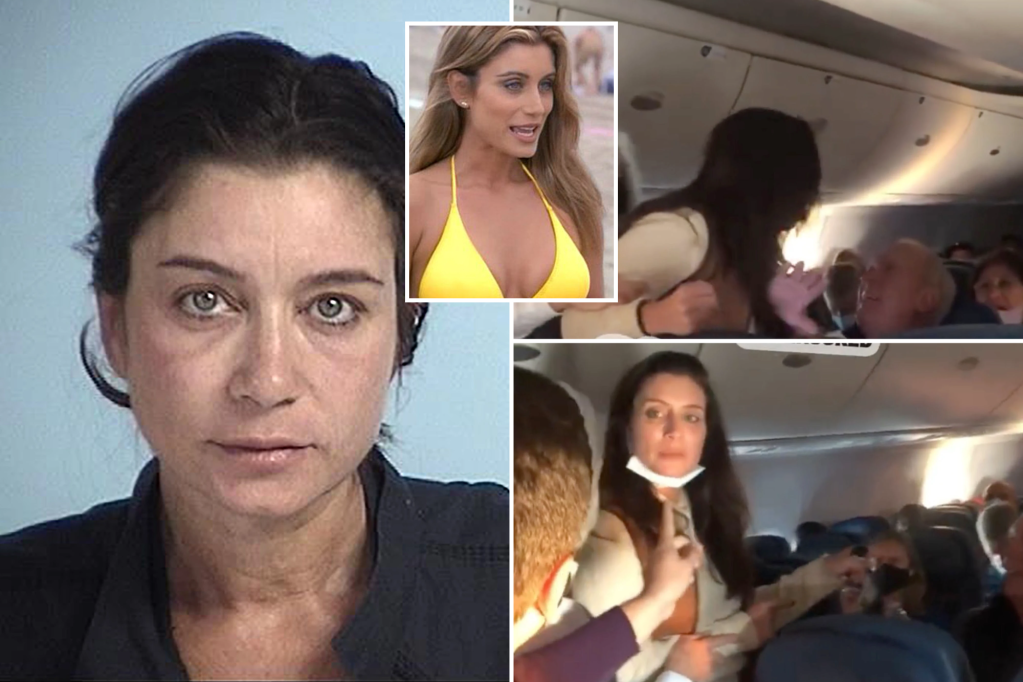 The woman who was arrested after she was caught on video slapping a passenger aboard a Delta flight has had other brushes with the law — including just last month, when she allegedly tried to fight cops in Florida during an arrest for driving under the influence.

Patricia Cornwall, 51, allegedly became aggressive with officers after she crashed her gray Nissan in Santa Rose Beach on Nov. 10, according to court records.

“She said she was not hurt and then became belligerent,” a Walton County sheriff’s deputy wrote.

Deputies said that she initially refused to exit the vehicle or give them her name.

Then when she finally got out, Cornwall started “going after” the first responders, authorities said.

“Once we stopped her she tried to fight us,” the deputy wrote. “At that point, she was detained for her safety and ours.”

Deputies said they had been called to the scene by a tow truck employee who responded to the crash to provide her assistance.

The employee told authorities he had discovered Cornwall in the driver’s seat attempting to reverse the vehicle.

“Upon approaching the defendant for some assistance he detected an odor of alcohol emitting from the defendant [sic] breath,” the arrest report said.

When she continued to reverse the car, the man contacted law enforcement, cops said.

Deputies said she had slurred speech and her face appeared “flushed.” She refused to take a breathalyzer and failed the sobriety test.

Cornwall was arrested on a charge of driving under the influence and careless driving. She’s set to appear in court next on Jan. 10.

She was previously arrested on Dec. 11, 2020, in Los Angeles and later pleaded no contest to having a BAL of 0.08 percent or more.

In May, Cornwall was sentenced to 36 months of summary probation and ordered to complete 100 hours of community service, according to court records.

In addition, she had to enroll in and complete a three-month first-offender alcohol and drug education counseling program.

The same month as the Los Angeles arrest, her sister-in-law, Monica Cummings, filed for domestic violence protection against her, according to court records.

Cornwall, according to the court documents, has a “history of violent outbursts and destructive and erratic behavior.”

She allegedly sent voice messages to Cummings in which she threatened her, saying, “You are dead.”

“She stated I just f–ked up my whole family and I neither spoke to her prior or provoked this verbal assault,” Cummings said in court filings. “[Cornwall] said not to underestimate or doubt her and all it takes is one phone call.”

Cummings claimed that Cornwall has an “infatuation” with her newborn son and two daughters.

“She has bipolar tendencies and paranoia,” Cummings wrote. “She believes ‘we are with the government and I fear for my life and my children.”

Cummings’ order of protection against Cornwall was granted in January, records show.

Cornwall could not be reached by phone on Tuesday.

A one-time NFL cheerleader for the Los Angeles Raiders, Cornwall was hit with federal charges Monday for her wild mid-flight tirade that went viral on social media.

The fracas began when Cornwall asked a flight attendant with a beverage cart that was blocking the aisle for help finding her seat, according to a criminal complaint.

The flight attendant asked her to find a vacant seat until the beverage service was complete, to which Cornwall snapped back, “What am I, Rosa Parks?”

A man on the flight told her that she “isn’t black … this isn’t Alabama and this isn’t a bus,” prompting them to exchange insults, according to authorities.

Footage showed Cornwall berating him for not wearing a mask as he was eating — despite not wearing one herself — and then slapping the man.

She was arrested at the Hartsfield-Jackson Atlanta International Airport and later taken into custody by the FBI.