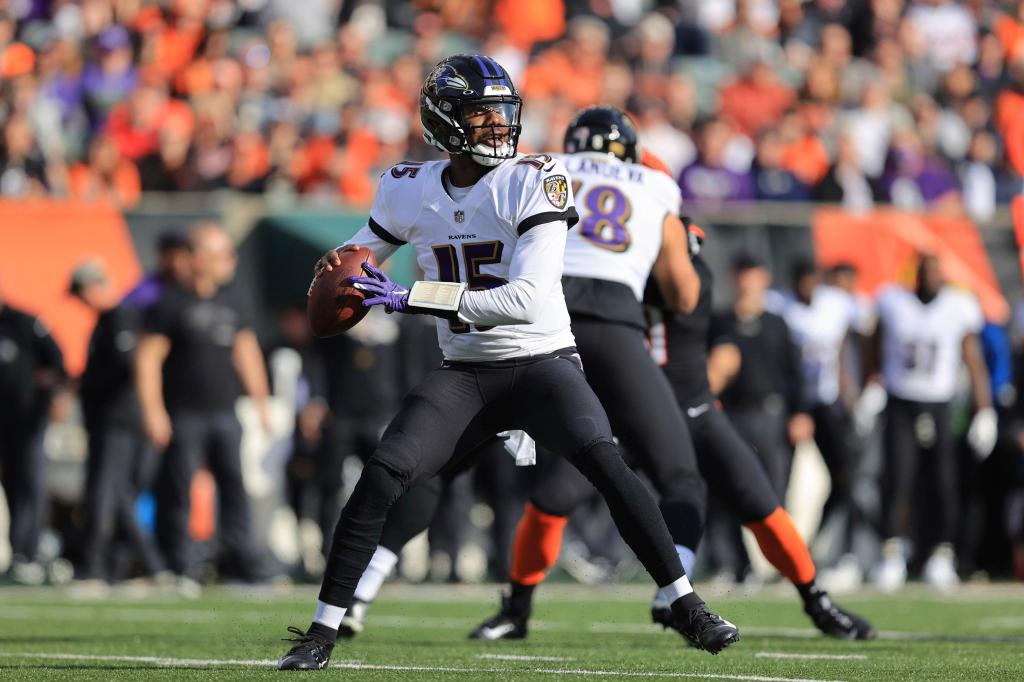 If there’s one good thing the Ravens can take away from their 41-21 loss to the Cincinnati Bengals on Sunday afternoon, it’s how third-string quarterback Josh Johnson manned the offense with little preparation.

With quarterback Lamar Jackson out with an ankle sprain and backup Tyler Huntley testing positive for COVID-19 a day before a crucial AFC North matchup, Johnson was thrown into the starting role for a team he joined less than two weeks ago.

“Shout out to Josh,” Ravens rookie receiver Rashod Bateman said. “I didn’t really know him. I didn’t know how long he played in the league, but it definitely showed today that [he’s] a smart guy with the way he was reading the coverages and things like that and communicating with us. It was definitely impressive for him.”

Johnson was one of two healthy quarterbacks to suit up for the Ravens on Sunday. With practice squad quarterback Chris Streveler added to the reserve/COVID-19 list Thursday, the Ravens signed and activated former Calvert Hall star Kenji Bahar from the practice squad as a COVID-19 replacement to serve as Johnson’s backup.

Even though Bengals quarterback Joe Burrow demanded the spotlight, throwing for a franchise-record 525 yards and four touchdowns, Johnson delivered a solid performance, completing 28 of 40 passes for 304 yards and two touchdowns and an interception.

“You dreamed of these things as a kid to go out there and play in a crazy stadium for a division game,” Johnson said. “So, I’m just appreciative of life.”

Johnson, who has played for 13 teams in his 14 seasons, was making his first start since 2018 and knew that the timing between him and his receivers was going to be different. He knew his feet were not going to be perfect. However, he appeared to have a sense of comfort with the offense, especially on the team’s opening drive.

With the Ravens using a hurry-up, no-huddle offense, Johnson marched them down the field before throwing a 4-yard touchdown pass to Bateman, his first career touchdown catch, to put Baltimore ahead 7-3 with six minutes left in the first quarter.

According to ESPN Stats and Info, Johnson is the first player to throw a touchdown pass for multiple teams in a season since 2015. He threw for 334 yards and three touchdowns in relief for the New York Jets in November against the Indianapolis Colts.

“It was just about how can we get down the field and continue to find open guys, get those guys the ball and let these great players do what they do,” Johnson said. “They have a hell of a cast here; even amongst all the things going on, there still are a lot of talented players in this building.”

Johnson spread the ball around effectively. Tight end Mark Andrews had 125 receiving yards and a touchdown on eight catches. At the start of the fourth quarter, the Ravens were facing a first down when Johnson had a defender in his face when he threw an 18-yard touchdown to Andrews, cutting the deficit to 34-21.

“He’s different — I’m just going to leave it at that. Mark Andrews is a monster,” Johnson said. “Just seeing it in practice and then playing with him in the game, he’s a great safety net to have.”

Andrews thought Johnson did a good job stepping in and finding open players.

“He was able to spread the ball around, and he played that quarterback position really, really well today,” Andrews said. “Like I said, you’ve got to tip your cap off to him. He’s been here for 10 days. Playing quarterback, knowing a system for 10 days is not an easy thing.”

For most, starting a game on short notice can seem like a difficult task. But Johnson, who had stints in the United Football League, the XFL and the Alliance of American Football, said it’s normal for him.

Johnson was selected in the fifth round of the 2008 NFL draft by the Tampa Bay Buccaneers and played in 26 games across three seasons before earning his journeyman status.

In 2018, Johnson was signed by the Washington Football Team to serve as a backup for Mark Sanchez after Colt McCoy and Alex Smith got injured. He went on to start three games before playing in the Alliance of American Football in 2019 and the XFL in 2020.

“My journey is a wild one, but it’s something that I’ll talk about when I’m done,” Johnson said.