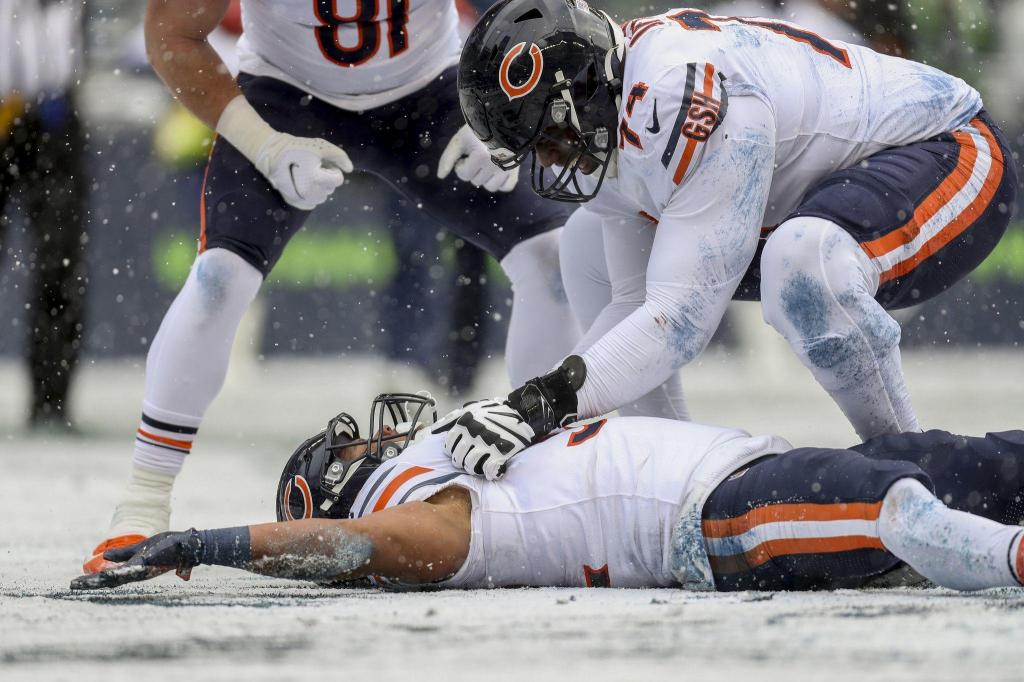 Damiere Byrd backpedaled and waited near the back of the snow-streaked Lumen Field end zone, talking to himself as the seconds ticked by until Nick Foles met his gaze.

The Chicago Bears had called a pick play meant for Darnell Mooney, and coach Matt Nagy knew they were going to try it even before Foles hit Jimmy Graham with a 15-yard touchdown pass to set up the decision to go for the tie or the win. But the Seattle Seahawks played it well, and when Byrd “ad-libbed,” Foles saw an opening to connect.

When Foles ripped the pass his way, Byrd leaped to grab the football, holding on to it with one hand while Seahawks defenders Jordyn Brooks and Ugo Amadi lifted him and drove him to the ground.

The two-point conversion was good, and Byrd bounced to the Bears sideline in celebration of the go-ahead play in a 25-24 comeback victory over the Seahawks.

“It was just one of those times where everything kind of set into place and just happened,” Byrd said. “Usually, I’m never coming down on the one hand like that. Just worked out that way.

“They actually helped me by picking me up that way. I was able to kind of scoop my foot underneath to be able to get it back down.”

Sunday’s win didn’t hold postseason implications for a Bears team already eliminated from contention. It didn’t involve many of the players who will be a part of the Bears future — including rookie quarterback Justin Fields, who was out with an ankle injury; second-year cornerback Jaylon Johnson, who was out because of COVID-19; and for much of the game rookie left tackle Teven Jenkins, who left with a shoulder injury in the first quarter.

And it likely won’t change the outlook for Nagy’s future with two weeks to go.

But in a 5-10 season, the Bears have had so many of those moments not go their way, so while the win on an unusually wintry day in Seattle was in many ways meaningless, the players still blared celebratory music in the locker room afterward.

“When you get into any sport, any profession, you look at it and you say, ‘You know, we all have to have a little dignity and pride into what we do,’” Nagy said. “It’s not easy when you lose.

“When you go through these coaching experiences, when you win it’s kind of easy and things get deodorized. When you lose, it’s really freaking hard. How do you learn from those moments? I’m taking a lot from these moments that we have.

“Right now, today, the only thing I’m proud and happy about is for those players in that locker room to be able to enjoy that win from tonight. They deserve it. For the coaches too. For me, I’m just proud to be a part of it.”

As Nagy was driving home after the Bears’ loss to the Minnesota Vikings last week at Soldier Field, he and his son, who is a high school freshman, had a conversation about “emptying your cup,” meaning giving everything you have no matter the circumstance. Nagy delivered a similar message to the players at a team meeting Saturday night in Seattle.

It didn’t appear to help in a snoozer of a first half. In snowy, slippery conditions, the Bears managed just 111 yards of offense.

But they put together an 82-yard touchdown drive on their second series of the third quarter, capped by rookie Khalil Herbert’s 20-yard run. Cairo Santos added a 35-yard field goal in the fourth quarter. And when Seahawks kicker Jason Myers missed a 39-yard field-goal attempt wide left on the following drive, it left an opening for a Bears comeback.

Mooney’s 30-yard catch got the Bears going on the winning drive, coupled with a roughing-the-passer call on Darrell Taylor. David Montgomery had catches of 10 and 14 yards to get the Bears into the red zone.

After Foles took a sack on first-and-10 from the 11 and threw incomplete on second down, he zeroed in on Graham on third-and-14.

Foles had plenty to prove in his first start since November 2020, and there were plenty of other players for whom the game held meaning, whether it was Byrd, who is on a one-year contract with the Bears, or Montgomery, who has echoed Nagy’s message of playing with pride a few times.

“You don’t get the short end of the stick and you fight through with your brothers and you finally get a win, I don’t really care what the record looks like,” Montgomery said. “To get a win with the guys in there and knowing the kind of character they’ve got feels amazing.

“So I’m just happy. I’m going to enjoy this win for the day, go get back to work and get ready for next week.”