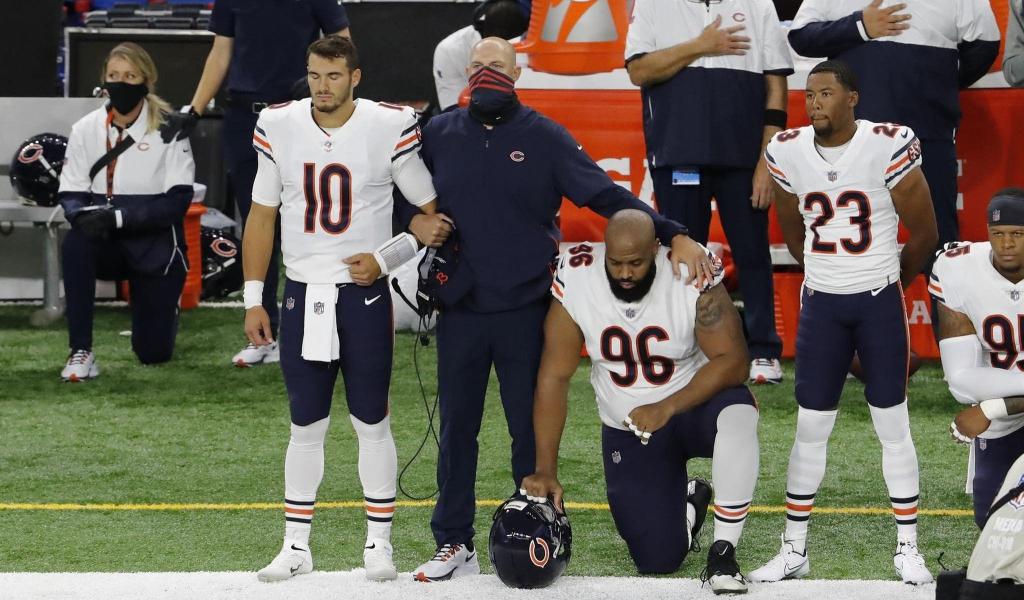 Chicago Bears quarterback Nick Foles hit Jimmy Graham with a 15-yard touchdown pass and then found Damiere Byrd for the two-point conversion pass to lift the Bears to a 25-24 victory over the Seattle Seahawks on Sunday afternoon at snowy Lumen Field.

The Bears trailed the Seahawks for most of the game before Foles guided them on a six-play, 80-yard drive for their first win in a month.

Filling in for the injured Justin Fields and Andy Dalton, Foles completed 24 of 35 passes for 250 yards and the final touchdown. It was Foles’ first start since November 2020.

The Bears got the winning drive going with a 30-yard catch from Darnell Mooney, coupled with a roughing-the-passer call on Darrell Taylor. David Montgomery had catches of 10 and 14 yards to get the Bears into the red zone.

Byrd’s two-point conversion catch for the lead was a leaping grab he held on to with one hand while being lifted into the air by two Seahawks defenders.

After the Bears trailed 17-7 at halftime, Khalil Herbert’s 20-yard touchdown run cut the Seahawks’ lead to 17-14 with 5:30 to play in the third quarter.

But the Seahawks responded quickly, with Russell Wilson hitting Gerald Everett with a 24-yard touchdown pass to put the Seahawks up by 10 again 24-14.

The Bears responded with a promising drive, getting first-and-goal at the 5-yard line. But Montgomery was stopped for a loss of 1 yard, Foles was sacked for minus-6 yards, Germain Ifedi was called for a false start and Montgomery dropped a low Foles pass.

The Bears then turned to Cairo Santos, who made a 35-yard field goal.

In the first half, the Bears turned it over on downs at the Seahawks 2-yard line.

After Robert Quinn sacked Wilson for a loss of 13 yards on the Seahawks’ next drive, kicker Jason Myers missed a 39-yard field-goal attempt. It was Quinn’s 17th sack, just a half-sack off Richard Dent’s franchise record of 17½ set in 1984.

Wilson completed 16 of 26 passes for 181 yards and two touchdowns, and Rashaad Penny rushed for 135 yards and a touchdown on 17 carries.

Bears quarterback Justin Fields will be inactive for Sunday afternoon’s game against the Seahawks.

That means rookie quarterback Ryan Willis, who was elevated from the practice squad Saturday, will back up Nick Foles. Fields is sitting out with an ankle injury, while quarterback Andy Dalton will miss the game with a groin injury.

Linebacker Ledarius Mack, wide receiver Dazz Newsome, defensive back Dee Virgin and wide receiver Nsimba Webster also are active after they were moved up from the practice squad.

Bears rookie left tackle Teven Jenkins left Sunday’s game in the first quarter with a shoulder injury. The Bears said he was questionable to return.

Rookie Larry Borom took over at left tackle. Borom, who missed the previous game while on the reserve/COVID-19 list, had started the game on the bench as the Bears opted to start Germain Ifedi at right tackle.

The Seahawks outgained the Bears 198-111 in the first half to take a 17-7 halftime lead at snowy Lumen Field.

Bears quarterback Nick Foles, starting in place of the injured Justin Fields and Andy Dalton, completed 10 of 15 passes for 71 yards, and running back David Montgomery gained 25 yards on 11 carries, including a 1-yard touchdown.

Wilson’s 41-yard touchdown pass to DK Metcalf gave the Seahawks a 7-0 lead with nine minutes to play in the first quarter. Metcalf beat rookie cornerback Thomas Graham Jr., who stumbled in his tackle attempt at the 5-yard line.

The Bears had a prime chance to tie it late in the first quarter with first-and-goal at the 4-yard line. But after Montgomery gained 2 yards on first down, he lost 2 yards on second down. Foles then threw incomplete on third down and hit Montgomery on fourth down for a 2-yard gain — 2 yards short of the goal line.

Rookie Dazz Newsome’s 28-yard punt return set up the Bears for a five-play, 15-yard touchdown drive on their next possession. Montgomery scored on a 1-yard run to tie it at 7-7 with 10:13 to play in the second quarter.

The Seahawks took a 14-7 lead on Penny’s 3-yard touchdown run with 4:47 to play in the second quarter. The Bears defense had a pair of penalties that helped the Seahawks late in the drive.

Bears rookie left tackle Teven Jenkins suffered a shoulder injury in the first quarter. Inside linebacker Christian Jones had a finger injury, and defensive back Teez Tabor had an ankle injury.