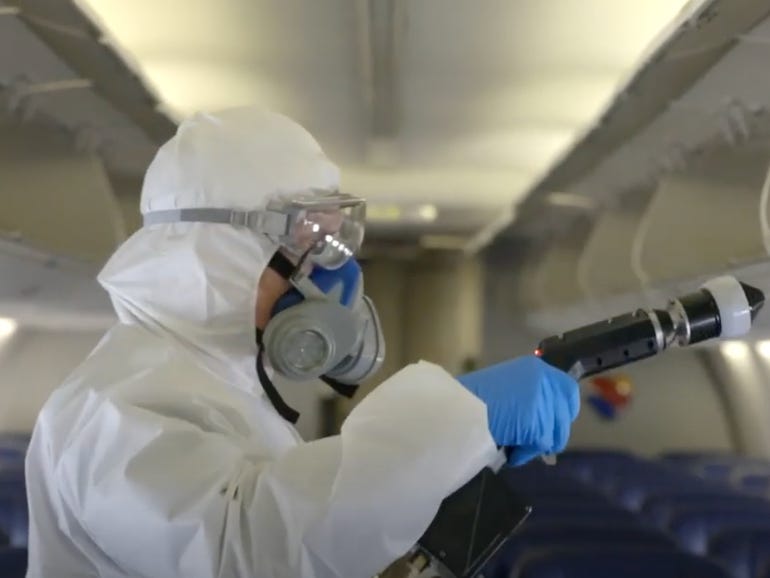 Are you so, so excited about CES?

Or are you somewhat more energized by the threat of Omicron?

Tech’s most self-regarding event is due to begin on January 5, yet many major tech companies — Amazon, Twitter and Facebook, for example — have already decided to give it an in-person miss because of COVID-19’s new strain.

Those who are still attending — and, who knows, perhaps CES will suddenly get canceled — are likely to be flying.

It might be wise, then, to consider the latest evidence on the safety of flying.

At a Senate hearing last week, outgoing Southwest Airlines CEO Gary Kelly declared that wearing masks on planes doesn’t do much. After all, he claimed, air filtration on planes is superior to that of most interior spaces.

Subsequently, Parker backed away from his concurrence and insisted he believed in the current mask regulations. Meanwhile, Kelly tested positive for COVID-19.

The issue of COVID-19 on planes has been a long-running affair. United Airlines was the first to parade its arrogance — oh, it’s become so much more sanguine over time — by opening up middle seats and declaring the whole idea of keeping them empty a mere PR exercise.

Then, some scientists wondered whether packing in a lot of people in a confined space wasn’t asking for trouble. One study suggested that in-flight transmissions really do happen.

It’s all still a mess. Humans are tired of COVID-19. They’re tired of the masks. They’re making their own risk calculations as if everyone is now the actuary of their own lives.

As CES hopefuls continued to weigh the wisdom of attending — and I know some people who canceled their trips last week — the airlines made another fascinating statement.

This time, it came from the medical adviser to the International Air Transport Association — which represents all airlines.

“Whatever the risk was with Delta, we would have to assume the risk would be two to three times greater with Omicron, just as we’ve seen in other environments,” he said.

Powell was also insistent that airflows on planes are still far better than in other indoor areas. Airports, for example.

And you have to do a lot of sitting and standing around in airports.

So if you really want to go to CES to see things — and, perhaps more importantly, meet with people — it’s best not to listen to airline CEOs and instead be your own actuary.

It seems that, with Omicron, every day brings both good and bad news. It’s extremely infectious. It may be less severe than Delta. Cases have already gone down in South Africa, where the first identified strain. Cases have gone up in the UK, where the strain of indecision is stultifying.

While some have already muttered that CES stands for Consumer Electronics Superspreader, the event’s organizers clearly still believe it’ll all be fine. They’re insisting on every attendee proving their vaccination status and wearing a mask.

If the event does go ahead, it’ll be interesting to see whether the exhibition halls will be less crowded than the planes that brought attendees to them. And still, no one will likely know, should they get infected, where and how it happened.

No one knows anything for sure. We’ve become used to that these days, haven’t we?