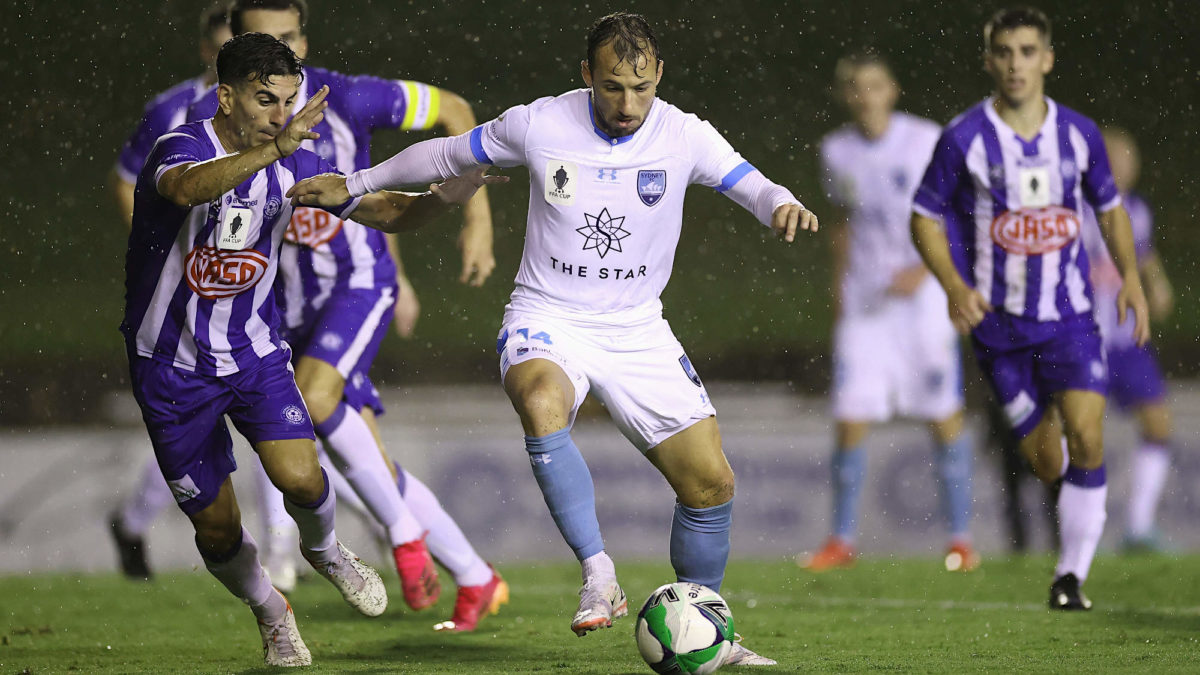 I’ve always enjoyed watching a soccer match being played in the gentle drizzle of misty rain, be it on TV or in person. It’s soothing.

When Sydney Olympic challenged Sydney FC in a recent FFA Cup game, the water droplets weren’t visible on the tube, although the brave crowd told a different story, as they huddled in the back of Belmore Sports Ground, staying safe.

At the halftime show, footage of a bouzouki, a traditional Greek instrument, was uploaded to Twitter. Its uplifting melody accompanied the downpour, as it streaked against the floodlights, mimicking crystallised bullets, in what seemed like a symphony of the senses.

Most fans stayed dry, devouring their hot souvlaki in the cold conditions. Such is the camaraderie of creature comforts.

I’m sure there’s even the odd player out there, who prefers performing in slick conditions.

Actually, Elvis Kamsoba might agree. In the 78th minute, it appeared the Sky Blues’ newest recruit had slipped, causing his fortuitous hand to accidentally palm the ball into goal.

Since there was no VAR being utilised, a very blessed Elvis was practically singing with joy. Surely Diego Maradona would approve.

Once, at an international game at the old Sydney Football Stadium, a mate and I were watching Japan versus Australia. Seeing the approaching clouds, I suddenly realised our shelter strangely gave little cover.

“The roof wasn’t built to protect us from Mother Nature,” said the tour guide, years after, as I followed a behind-the-scenes event. “Its curved features actually help lock in the crowd’s cheers.”

Sometimes, supporters also tend to get a tad boisterous when stuck in the elements.

It was the late 1990s, and I was working in a newsagency in North Sydney, when on selected evenings, a stream of Northern Spirit diehards would march up Miller Street, chanting.

In a shower, their bellows were even louder, as most other foot traffic had disappeared, probably confined to the pedestrian tunnels below.

Back then, North Sydney Oval had become a wasteland of mud, all except for the remains of a hardened cricket pitch, which caused havoc to slippery boots.

Maybe the fans’ battle cries were a warning towards the heavens, that no matter how torrential the downpour was, their team would persevere. Keep in mind, this was the field once nicknamed ‘Concrete Park’.

Occasionally, when things turn biblical outside, a hard surface with Subbuteo is all a wistful person needed. By playing the tabletop game as a teenager, I was properly introduced to football.

With a copy of British Soccer Weekly under his arm, my mate lined up Tottenham Hotspur, thus giving my Nottingham Forrest a thrashing.

A few weeks later, Ben and I were holding up a tiny tifo at the Samurai Blue game. With our limp Socceroos banner draped over our soggy heads at the SFS, only a few people got to witness our water-soaked message of support.

In hindsight, “Let’s eat some sushi” seemed more like an advertisement for seafood, rather than a menacing ultimatum. This was the recklessness of youth in the rain, or so we thought.