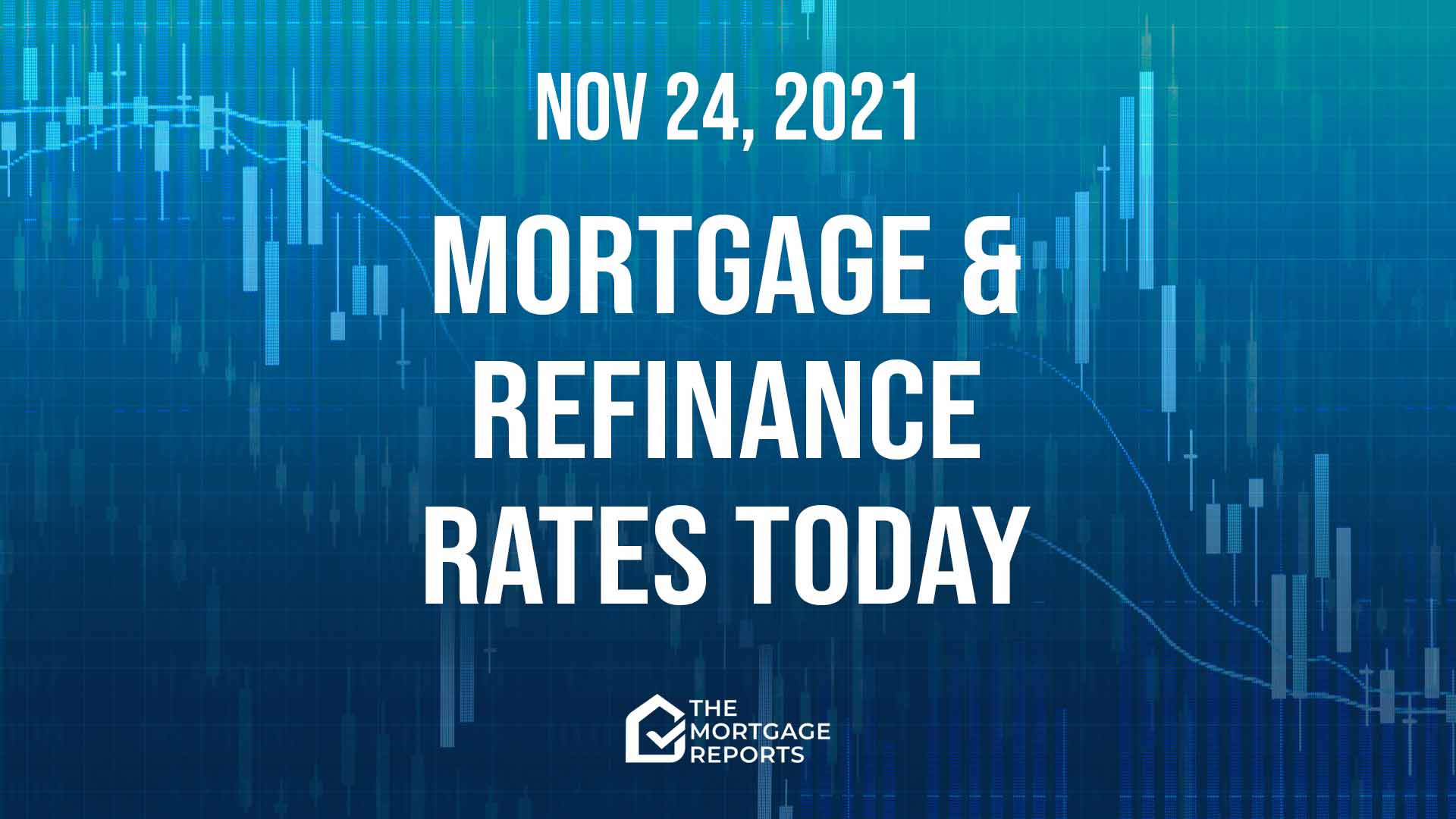 It’s looking as if mortgage rates today might rise modestly, buoyed by good figures earlier for weekly unemployment claims, and durable goods orders. However, other information due out later (see below) could change everything.

Happy Thanksgiving tomorrow! We’ll be back on Friday.

So, for now, my personal rate lock recommendations remain:

>Related: 7 Tips to get the best refinance rate

Before the pandemic and the Federal Reserve’s interventions in the mortgage market, you could look at the above figures and make a pretty good guess about what would happen to mortgage rates that day. But that’s no longer the case. We still make daily calls. And are usually right. But our record for accuracy won’t achieve their former high levels until things settle down.

So use markets only as a rough guide. Because they have to be exceptionally strong or weak to rely on them. But, with that caveat, mortgage rates today look likely to rise a little. But be aware that “intraday swings” (when rates change direction during the day) are a common feature right now.

So a lot is going on here. And nobody can claim to know with certainty what’s going to happen to mortgage rates in coming hours, days, weeks or months.

After all the ups and downs of the last four weeks, mortgage rates last night were only a little higher than they were at the start of that period, according to Mortgage News Daily’s archive. But MND says they’re starting this morning at their highest point since April.

So, overall, they’re gently drifting higher. However, as you’d expect, there have been plenty of periods when they’ve fallen a little. Unfortunately, those tend to be relatively brief, shallow and unpredictable. So my rate lock recommendations have been stuck on “lock” for some months.

Yesterday, I talked about a small avalanche of market-sensitive information” due out today. Overnight, The Guardian called it a “tsunami.” Take your pick.

The Fed will be releasing at 2 p.m. (ET) the minutes of the last meeting of its monetary policy body, the Federal Open Market Committee. And investors will pore over those for hints about future rate hikes. If they find any of those, mortgage rates might rise.

This morning also brings figures for gross domestic product (GDP) in the third quarter of this year. That sounds very important and it could be. But we’ve already had the first reading of those figures and few expect much to have changed since those came out.

It’s more likely that this morning’s core personal consumption expenditures, out at 10 a.m. (ET), will move markets and mortgage rates. That’s the core inflation measure that the Fed pays most attention to. Analysts polled by MarketWatch expect a year-over-year rise of 4.1%. But, if it’s appreciably higher than that, mortgage rates might rise.

Tomorrow is, of course, Thanksgiving. And bond markets will be closed both that day and on Friday afternoon.

Many who influence markets may extend their breaks by taking extra days today and on Friday morning. So we may have fewer and less experienced people determining mortgage rates and bond yields.

That could go one of two ways. They might be more active to show their absent bosses how capable they are. Or they might play things safe and barely react to news. Past holidays provide little guidance as to which way they’ll go this time.

Overall, I still expect mortgage rates to climb higher. However, there’s a real possibility of a new wave of COVID-19 pulling them lower over the winter. How likely that is remains anyone’s guess. Read more about that in Monday’s edition of that article.

The most recent weekly record low occurred on Jan. 7, when it stood at 2.65% for 30-year fixed-rate mortgages.

Since then, the picture has been mixed with extended periods of rises and falls. Unfortunately, since September, the rises have grown more pronounced, though not consistently so.

Freddie’s Nov. 24 report puts that weekly average for 30-year, fixed-rate mortgages at 3.1% (with 0.7 fees and points), unchanged from the previous week.

The numbers in the table below are for 30-year, fixed-rate mortgages. Fannie’s were published on Nov. 18 and the MBA’s on Nov. 22.

Freddie’s were released on Oct. 15. It now updates its forecasts only quarterly. So we may not get another from it until January.