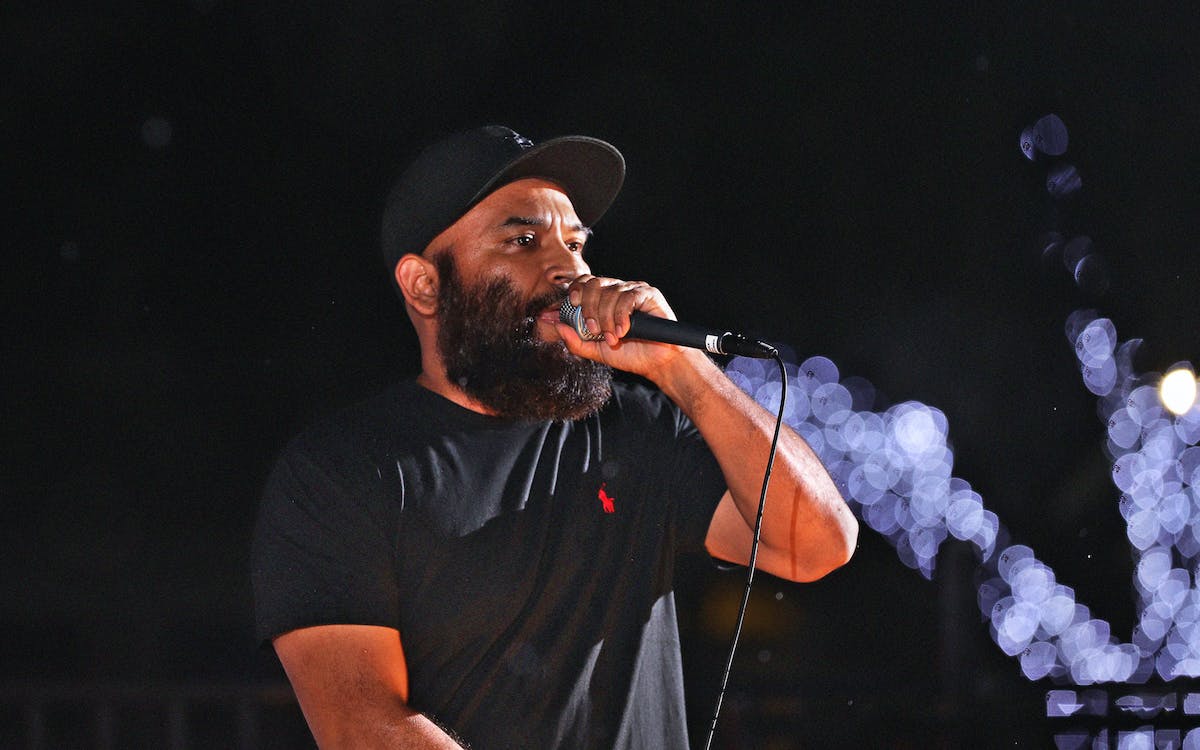 University of Texas at San Antonio assistant professor Marco Cervantes, who performs as the rapper Mexstep, doesn’t hide his hip-hop career from his class. Why would he? It’s not an alter ego. “I was just talking about the album today in class,” he told me in mid-November. “I was like, ‘Yo, I got a new album coming out next week,’ just kind of letting them know, because a lot of what I talk about in my classes, it shows up in the music too. So it’s not a real stretch.”

Cervantes, who is 45 years old, prefers his dark beard long and often wears a baseball cap or a black fedora. In addition to performing as a solo artist and a member of the hip-hop group Third Root, with collaborators Easy Lee (Charles Peters) and DJ Chicken George (Jeff Henry), he teaches UTSA’s “Latino Cultural Expressions,” a class available to all students, no matter their major. Andrea Sanderson, the current poet laureate of San Antonio, who performs as Vocab, calls him an arts educator, activist, and a pillar in San Antonio hip-hop. Austin rapper and education consultant Bavu Blakes, who has known Cervantes for a decade, describes him as a scholar emcee. “It can be very difficult to see where the emceeing begins and the scholarship ends,” Blakes said.

Last summer, Cervantes was teaching Zoom classes and working on his most recent album with Grammy-winning Austin producer Adrian Quesada, best known as a member and producer of Black Pumas, when he noticed something strange was happening with his jaw: the lower right part of his mouth was becoming paralyzed. He couldn’t whistle and he was having trouble pronouncing some words. When he visited a doctor, he learned that a lime-size tumor was growing on his salivary gland. “It’s one of those things where I was just on WebMD like, ‘Oh, wow, all of these facial nerves are connected right there, from your eyebrows down to your chin, just moving your mouth all over the place,’” he said.

A biopsy showed the tumor was benign, but, unsurprisingly, the scare offered Cervantes a theme for his new record. Vivir is inspired by the pandemic and the February ice storm that traumatized us all, as well as the surgery that left Cervantes with a scar from his ear to his neck. “I was going to call it ‘Alive’ for awhile,” he said.  “Then I thought the Spanish infinitive verb ‘vivir,’ to live, would allow for a lot more interpretation.”

Cervantes is hardly a newcomer to hip-hop. Raised in Houston on a steady diet of K-Rino, Point Blank, Geto Boys, and UGK, he began rapping in middle school. (As a fifteen-year-old, he once rapped for an encouraging Willie D.) By the time he moved to San Antonio for graduate school, in 2003, he’d made enough connections in the city’s nascent hip-hop scene to begin deejaying protests, rallies, and community events, using the name Mexican Stepgrandfather—eventually shortened to Mexstep to spare him the agony of hearing fans misremember his name as Mexican Godfather or Mexican Grandfather.

In those early years in the city, he dived deep into Chicano literature, learning about the city’s history and looking for ways he could contribute to its activist culture. “I wanted to do this, but in my own way, in the rap format,” he said. “Listening to other emcees, I knew so many others were doing that work—groups like Black Star, of course, or Dead Prez.” Except Black Star, Dead Prez, and other acts like them were rapping about Black Americans’ struggles; nobody in Texas was doing anything quite like that for Latinos.

So Cervantes found his niche, marrying the Chicano activism in Texas to hip-hop. Since 2009, he has released three solo records, all the while releasing material with Third Root. In 2020, at a Black Pumas concert in San Antonio, he bumped into Quesada, whom he’d worked with in past projects. When the two began talking, Quesada mentioned wanting to record again. “I was like, ‘Okay, of course. Yeah. I mean, you’re Adrian Quesada. Of course,’” Cervantes said.

The first part of Vivir celebrates Chicano pride—zoot suits, doo-wop, lowriders—a history Quesada knew well from researching and producing his 2018 Amazon compilation, Look at My Soul: The Latin Shade of Texas Soul. “When we were making [Vivir],” Quesada said, “I definitely tried to make a couple of tracks that would nod to that rich history of San Antonio.” The mellow track “Oldies” evokes a drive on Interstate 10: “Switch lanes and we cross the road / R&B and Chicano Soul.” The track “Connected,” stresses the shared history of Indigenous and African roots, as well as staying in touch with friends: “Connected like Legos from here to Lagos / Globally, historically, who you calling minority? / Rebuke that authority early in the morning, pouring tea / Let’s get out of quarantine, time to reassemble” before it cautions, “When I call, I don’t expect a busy signal, either.”

The second part of Vivir highlights the resistance music for which Mexstep is best known. There’s a track on the 1918 Porvenir massacre in Texas (“Recuerdos”), on criminal justice (“Criminal”), and on U.S. foreign policy aggression (“Harvest”). San Antonio singer Nina Diaz, of the punk band Girl in a Coma, who appears on this album along with Blakes, Vocab, and Cervantes’s Third Root collaborators, told me, “Marco has a perfect way of explaining things to the point . . . I love the way he flows and the way that he connects. It’s similar to Girl in a Coma; we were punk, but you could put us on any bill because we could just kind of flow within it, and we had our message. It’s the same thing with him.”

Recently, Quesada has noticed younger deejays incorporating more roots music into their sets. “A lot of those deejays who come at that arrived through samples and hip-hop,” he said, “and I think Marco is very much at the intersection of all that.”

Blakes has made similar observations, but with a twist. He added that Cervantes inspires a different kind of record-digging: for historical information and sources, to preserve accurate chronicling and prevent whitewashing of events. Given the increasing concern on that topic, Mexstep’s work feels more timely than ever. “That’s a pretty good summary of what Mexstep and Third Root are doing,” he said. “They’re making the kind of hip-hop music where you can make records, but you’re also going to dig for records, if you hear what I’m saying.”