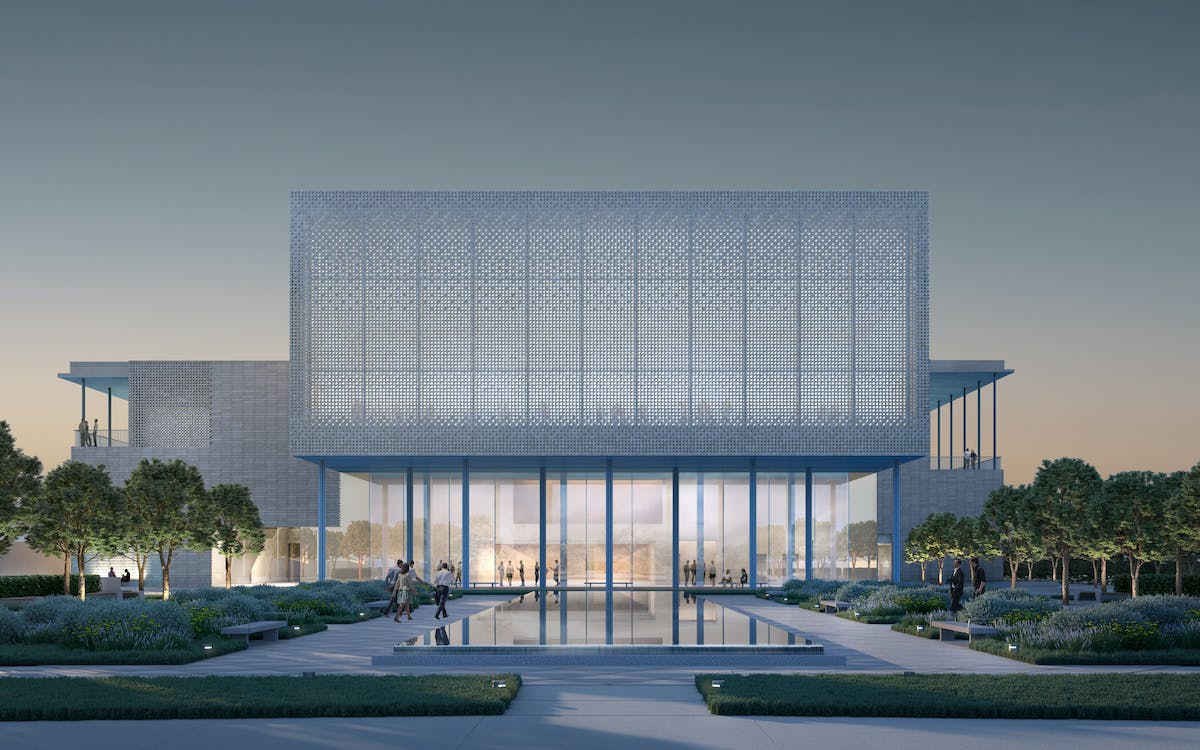 Earlier this fall, when bulldozers and other construction equipment appeared at one of the most coveted vacant corners in Texas, Houstonians who had watched the site for years turned giddy.

Work was finally starting on a project that has been in the works since 2006, when the Aga Khan, the spiritual leader of the world’s fifty million Shia Ismaili Muslims, purchased the eleven-acre lot on Allen Parkway near downtown Houston and vowed to build a cultural complex there. Projected to open in about three years, the center will be a free, public gathering space open to people of all faiths and backgrounds.

Lead architect Farshid Moussavi came to town in mid-November to unveil her design for a sublime contemporary building with an abstracted Persian accent, perched amid graceful, classical gardens. In renderings, the Ismaili Center Houston looks destined to become an international landmark. Think paradise on the bayou.

Texas has about forty thousand Ismailis, the largest concentration in the U.S. The vast majority live in the Houston area. Houston mayor Sylvester Turner lobbied hard for the new center, which will be a national hub—the first in the U.S. and seventh in a network of sister sites the Aga Khan has built since 1985 in London, Lisbon, Vancouver, Dubai, Dushanbe (Tajikistan), and Toronto.

Ismaili centers are an invention of the Aga Khan. “They are places that reflect his belief in the power of architecture to improve lives,” Moussavi says. Each holds a jamatkhana, or prayer hall, but also serves as a brick-and-mortar ambassador for expressing the Ismailis’ commitment to uniting diverse people and cultures. Houston’s center will be the most public-focused yet, with an education wing, a black box theater, a cafe, flexible exhibition spaces, conference rooms, and social halls, as well as administrative offices for the national Aga Khan Council. Performances and gatherings will happen outside. Harmony between the building and its outdoor environment—an important aspect of the Muslim world’s architectural heritage—was a starting point for Moussavi and landscape architect Thomas Woltz.

From a distance, Moussavi’s design is intentionally subtle. It’s a five-story, tripartite building whose boxy sections combine an exterior of matte, sand-colored marble (crafted in various ways to create a clean, rectangular patchwork of tessellated and cutout patterns) and three wide-open eivans, or elevated verandas. The magnetic beacon—the place everyone will want to be first, sitting above the prayer hall—is the massive eivan facing north, across Buffalo Bayou. Moussavi has balanced that exuberance with a quieter cut-stone tapestry screen on the south facade, above a drop-off portico and a glass-walled entrance.

“You’ll see light coming through and radiating from the building, but it needs some privacy because there will be all kinds of events inside,” she says. “I’m more interested in the building belonging to its context and not just sticking out as something that is trying to celebrate architecture somewhere else. So it seemed to me appropriate to me that the building has a quiet simplicity with elegance from the outside.”

Moussavi has combined elements from various architectural traditions of the Muslim world, but was most influenced by Persian architecture, because it’s personal—she left her native country, Iran, at age fourteen. The eivans afford expansive views that will reveal the symbolic geometries of the walled landscape. Google the Ali Qapu, a monumental palace in the Iranian city of Isfahan, and you’ll recognize their inspiration, although Moussavi’s streamlined interpretation looks perfectly at home in twenty-first-century Texas. “The use of verandas rather than courtyards is appropriate to the Houston climate,” she says.

The palette stays calm, but other patterns reveal themselves and create aesthetic surprises. Most spectacular, thin screens of ultra-high-performance concrete form the soaring geometric structure of a central atrium. The building is a relatively modest 150,000 square feet. That’s larger than the Menil Drawing Institute and smaller than the Museum of Fine Arts, Houston’s Kinder Building. The footprint is deceptive because it doesn’t consider the bodily experience of infinity created by the central atrium’s volume, Moussavi says. She likens it to the high ceilings of gothic cathedrals, which serve an emotional rather than functional purpose. “They were tall to lift peoples’ spirits up,” she says.

The center’s education wing will have an early childhood development center as well as classrooms for the Ismaili community’s older children and students. One of the things Ismailis learn early is the tenet of service. In fact, all Ismaili centers, large and small, are run by volunteers.

“Ismailis are very engaged in the community,” says Sugar Land mayor Joe Zimmerman. (The biggest existing jamatkhana in the region is in his city.) “They don’t seek a lot of publicity for themselves. But I can tell you, when we went through Harvey, the pandemic, the Tax Day flood, the Memorial Day flood, they were pretty much all in . . . mucking out houses and inviting strangers into their homes. They’re boots on the ground. Wherever their jamatkhanas are, that community’s going to benefit.”

David Leslie, the executive director of the Rothko Chapel, also has collaborated with the Ismaili community for years. “So many people who are not Muslim have a very truncated view of Islam, and not always a very positive one,” he says. He hopes the new center will give Texans a greater view into the diversity of the Islamic world. What will happen in and around the new building echoes the spirit of the Rothko Chapel, but on a grander scale, he suggests. The chapel grew from John and Dominique de Menil’s deep Catholic faith, but they were also progressive, “wanting to push forward the best of humanity and push back on the worst of any ‘isms.’ Now the Ismaili community is putting forward, in very public ways, key tenets of their belief system—diversity, humanity, pluralism, peace. These places are not redundant. They’re something you can never have too many of.”

The Aga Khan was involved in virtually every design decision. “It’s not that he ever said no to anything, but he has an incredible ability to ask questions,” Moussavi says. She added the building’s discreet blue accents because he kept asking, “What about color?” She chose a soft sky blue to enliven the soffits of the eivans, alcoves around benches facing the gardens, and some of the tile floors—ultimately strengthening the connection to nature.

The LEED Gold–certified building will occupy only about an acre of the site, while the garden fills ten acres. “That’s so rare in Houston,” says Woltz, whose internationally known firm also reimagined Memorial Park and the Rothko Chapel campus. The Ismailis’ desire for environmental sustainability in an area that floods helped shape the design of the gardens as well as the building.

Inside the Ambitious Plan to Redesign Houston’s Biggest Park

Like Moussavi, who has served on architectural juries for the Aga Khan, Woltz has a history with the leader. Before Woltz designed the Aga Khan Garden in Alberta, Canada, a decade ago (it opened in 2018), he toured iconic gardens across the Islamic world—an invaluable education in the green treasures of Africa, Europe, the Middle East, the Far East, and South Asia. He saw firsthand how a garden’s geometric order can reflect the divine in nature’s structures, down to the cellular levels of a flower or a snowflake. “There’s a beautiful, philosophical connection,” Woltz says. Water, the organizing design principal, is revered as the source of life. The Ismaili Center Houston will have more fountains and water features than Woltz can easily count.

“All of the Muslim world would recognize different threads of tradition in these gardens. Yet they have a coherent vocabulary of materials, forms, shapes that’s also contemporary,” Woltz says. “We worked to make it balanced, elegant, and coherent.”

His firm is famous for restoring native environments, which rarely look formal. But the new garden’s purposeful green spaces will incorporate a broad palette of native Texas plants and trees to express the diversity of the state’s eco-regions. Texas plant expert Adam Black helped choose the most adaptable species for the site and the design.

A flood-friendly, circular garden of Gulf Coast plants will act like a sponge at the low end, helping to store and filter stormwater. A colorful perennial garden closer to the building draws from a Cross Timbers palette, “like a pollinator heaven,” Woltz says. A garden for weddings and receptions will feature plants from the Chihuahuan Desert. A dense, shady rectangle of pleached oaks; a huge, tree-lined event lawn; and smaller terraces also are in the mix.

Other long-awaited developments nearby—spurred by the trail-filled charms of Buffalo Bayou Park, which opened in 2015—are taking shape too. Regent Square, a new lifestyle center under construction, will have 24 acres of luxury apartments, restaurants, and shops. Its website touts “a new sense of what a city can be” and “a hum of cosmopolitan liveliness.” Amid all that, the Ismaili Center Houston could seem like a mirage.

In the decade since the Aga Khan gave Spanish sculptor Jaume Plensa’s Tolerance to the city as a kind of prelude to his project, the installation’s seven kneeling figures have become slightly less prominent. The live oaks around them have matured. Traffic congestion will grow too. That’s why its gardens will be walled, Moussavi says. “His Highness really wants them to be quiet, and a space for contemplation.”

She appreciates the green buffer of the historic cemetery across Montrose Boulevard from the center, but doesn’t mind the bustling atmosphere. “Cities are more dynamic when they have kind of a mixed grade,” she says. “I do like the fact that there is housing nearby, and it is not just all museums. It’s a community center.”