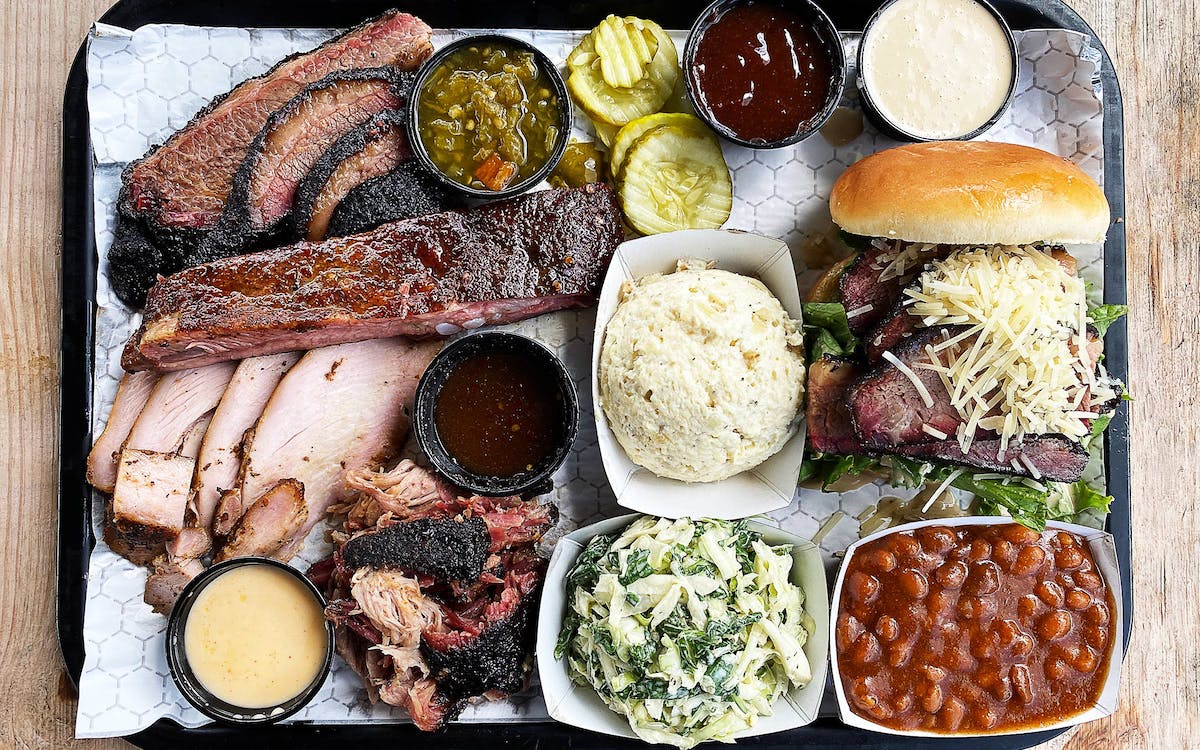 The Houston metro area has more praiseworthy barbecue joints than most entire states. We have our favorites, of course. Texas Monthly recently published a list of the top fifty barbecue joints in Texas and fifty more worthy of honorable mentions, but our barbecue recommendations don’t stop there. You can get a great meal of smoked meats at any one of these Houston barbecue joints.

In the city of Houston

Blood Bros. BBQ (Top 50)
Barbecue doesn’t get much more creative than at this joint, which is known more for having a rotating menu of myriad specials—think Thai green curry boudin and thit nuong pork belly burnt ends—rather than a single specialty.

Burns Original BBQ
At this Houston classic, it’s hard to choose between saucy pork spareribs, a chopped beef sandwich, or a loaded baked potato so big the styrofoam lid has to be taped down. The diminutive building smack-dab in the middle of a residential neighborhood is old school, and thankfully, so is the menu.

Feges BBQ (Top 50)
Whether it’s a weekday lunch at the original Greenway Plaza location or dinner with a glass of wine at the new Spring Branch offshoot, Patrick Feges and Erin Smith will provide incredible barbecue and stunning sides rarely seen alongside smoked meat.

Gatlin’s BBQ (Honorable Mention)
Since Gatlin’s moved from its humble original location, owner-pitmaster Greg Gatlin and chef Michelle Wallace have created a dynamic menu of barbecue classics, beautifully composed sandwiches (especially the smoked house-made bologna), and breakfast options that include a brisket biscuit sandwich that will have you reconsidering any other kind of bun.

Lonestar Sausage & BBQ
The uniquely juicy links imported to Houston from the Beaumont area were once prevalent in the city, but no longer. Sausage savant Kevin Mason, who opened this joint in 2016, is keeping old traditions alive. If you prefer a little less juice, try the garlicky beef-and-pork sausage.

Pinkerton’s Barbecue (Top 50)
Home of the “candy paint” pork rib, which could double as dessert if the smoked blueberry bread pudding weren’t so good. On the savory side, try the ultra-tender brisket; it’s also hard to beat the duck-and-sausage jambalaya.

Pizzitola’s Bar-B-Cue (Honorable Mention)
This historic joint has cranked out excellent pork ribs for decades from its unique brick pit. Recently, the owners brought in a new offset smoker to improve the brisket, and what a difference it has made. Add in some smoked mac and cheese and scratch-made banana pudding, and you have one of the most satisfying barbecue meals in town.

Roegels Barbecue Co. (Honorable Mention)
The newly perfected, house-made sausages are just the latest reason Roegels is a must-visit in Houston. Daily sandwich specials such as the smoked turkey katsu on Monday and the state’s best pastrami Reuben (served on Thursdays) are reason enough to visit, so the great brisket and ribs are just gravy.

Southern Q
Steve and Sherice Garner opened a new spot in 2019, but they’re still making the same great barbecue. Try the smoky pork ribs and juicy sausage for your main, and fried corn on the cob and dirty rice on the side.

The Brisket House
It isn’t an easy feat to open multiple locations of a Texas barbecue joint, and keeping the quality high is even more difficult. Owner Wayne Kammerl has risen to the challenge with his three Brisket House outposts. The brisket, ribs, and jalapeño sausage are consistent across all locations.

The Pit Room
You’ll have a hard time choosing between the house-made chicharrones and the jalapeño-vinegar potato chips for an appetizer, but our favorite main course is any of the barbecue tacos served on a hearty flour tortilla. The barbecue is great outside of a tortilla as well. Be sure to load up at the generous condiment and pickle bar before finding a seat.

Truth Barbeque (Top 10)
Quite simply, it’s the best barbecue joint in Houston, and one of the ten best in the whole state. You can’t go wrong with anything on the menu.

Brett’s BBQ Shop in Katy (Top 50)
There are very few barbecue joints in Texas where you can find a better beef short rib. It’s worth the splurge. If you require balance in your barbecue consumption, try a side of the crunchy vinegar slaw.

CorkScrew BBQ in Spring (Top 50)
Long lines at barbecue joints might keep some potential customers away, but this joint moves its well-deserved crowd more efficiently than most. Impeccable barbecue will be your reward at the end.

Daddy Duncan’s BBQ in Katy
Find this popular food truck parked outside ErmaRose Winery most Friday and Saturday evenings. Try the smoked Dr Pepper oxtail, boudin, roasted corn, and mac and cheese. The rest of the week, you can find the joint’s barbecue in various dishes all over Katy.

Harlem Road Texas BBQ in Richmond (Honorable Mention)
Owner and pitmaster Ara Malekian brings a chef’s mentality to his barbecue. Well-crafted sausages, tender beef ribs, and tender brisket are all smoked with oak wood and staves of reclaimed wine barrels. Make the trip for the meat, or for unique specials such as smoked octopus and lamb chops.

Killen’s Barbecue in Pearland (Top 50) and the Woodlands
With a new location in the Woodlands, the joint that put Houston on the modern barbecue map is now available way north or way south of town. As always, it’s worth the trip.

Pappas Delta Blues Smokehouse in Webster
Yes, this is a fancy barbecue joint with servers, tablecloths, smoked cocktails, and an extensive wine list. That doesn’t mean the barbecue can’t also be good. Beyond the steak and the Nashville hot chicken, you’ll find impressive smoked meats, including brisket.

Reveille Barbecue in Magnolia
This weekends-only food truck sets up at Lone Pint Brewery in the middle of tiny Magnolia northwest of Houston. It specializes in peppery brisket and pork ribs, but keep an eye out for specials like barbecue tacos, smoked pork steak, and even smoked alligator.

Smokin’ Z’s BBQ in Bayou Vista (Honorable Mention)
Smokin’ Z’s is open only on the weekends, but at least you can get both breakfast (brisket kolaches, anyone?) and lunch. The house-made sausages, sweet-glazed pork ribs, and smoked pork-belly BLT keep folks coming back to the food truck just north of Galveston.

Tejas Chocolate + Barbecue in Tomball (Top 50)
Yes, the chocolate is as good as the barbecue, or vice versa, depending on what first draws you to this gem. Praises for the chile relleno sausage are sung far and wide for good reason, but the whole menu is done right.

Getting the week started with barbecue can be a challenge with so many joints closed on Mondays, but there are a few great options in Houston. From the Top 50, you’ll find only the Greenway Plaza location of Feges BBQ open on Mondays. Gatlin’s BBQ, Pizzitola’s Bar-B-Cue, and Roegels Barbecue Co. are Monday options from our honorable mentions list. As for our other favorites, you can visit Ray’s BBQ Shack, the Pit Room, and all three locations of the Brisket House.

The brisket burnt-end boudin at Truth Barbeque is one of the best smoked boudins in the state, and you can get it every day the restaurant is open. For a Louisiana-style smoked boudin, which has more spice and less rice than most Texas versions, head to Southern Q. You have to wait until Friday for the Thai green curry boudin from Blood Bros. BBQ, while Smokin’ Z’s BBQ serves smoked-brisket boudin most every Saturday and Sunday. While the links aren’t made in-house, the folks at Burns Original BBQ in Houston, Pinkerton’s Barbecue in Houston, Dozier’s in Fulshear, and Daddy Duncan’s BBQ in Katy also smoke up a fine boudin sausage.

Gatlin’s BBQ and the Pit Room both open at 7 a.m. for breakfast. The Pit Room serves up barbecue breakfast tacos, while Gatlin’s offers a wider menu. Ask for the brisket biscuit, which comes with egg, cheese, and bacon jam. Pizzitola’s serves a Saturday brunch menu that includes a brisket-and-egg biscuit, ribs and eggs, and a pulled pork sandwich made with an apple fritter.

Barbecue is associated more with lunch than dinner, mainly because so many joints sell what meat they can smoke as quickly as possible. That means many of the best spots will be sold out by early or midafternoon, but a few are open late (or at least late for barbecue). Lonestar Sausage & BBQ, Southern Q, and Dozier’s all serve until 7 p.m. most days. Burns Original BBQ stays open thirty minutes later, and Pizzitola’s and Ray’s BBQ Shack are open until 8 p.m. Night owls should head to Feges BBQ‘s Spring Branch location, the Pit Room, and Pinkerton’s Barbecue, which close at 9 p.m. most nights. (Pinkerton’s is open until 10 p.m. on Fridays and Saturdays).

Sometimes you’d like something stronger than iced tea or Dr Pepper with your barbecue, and these joints can help. Truth Barbeque and Killen’s Barbecue serve local beers. Beer and wine are on offer at the Pit Room, Pizzitola’s Bar-B-Cue, and Tejas Chocolate + Barbecue. Feges BBQ Spring Branch has an extensive wine list, along with draft beer and margaritas. Blood Bros. BBQ has draft beer and signature cocktails, and at Pinkerton’s Barbecue there’s a full bar to go along with the beer ($1 on Thursdays) and wine.