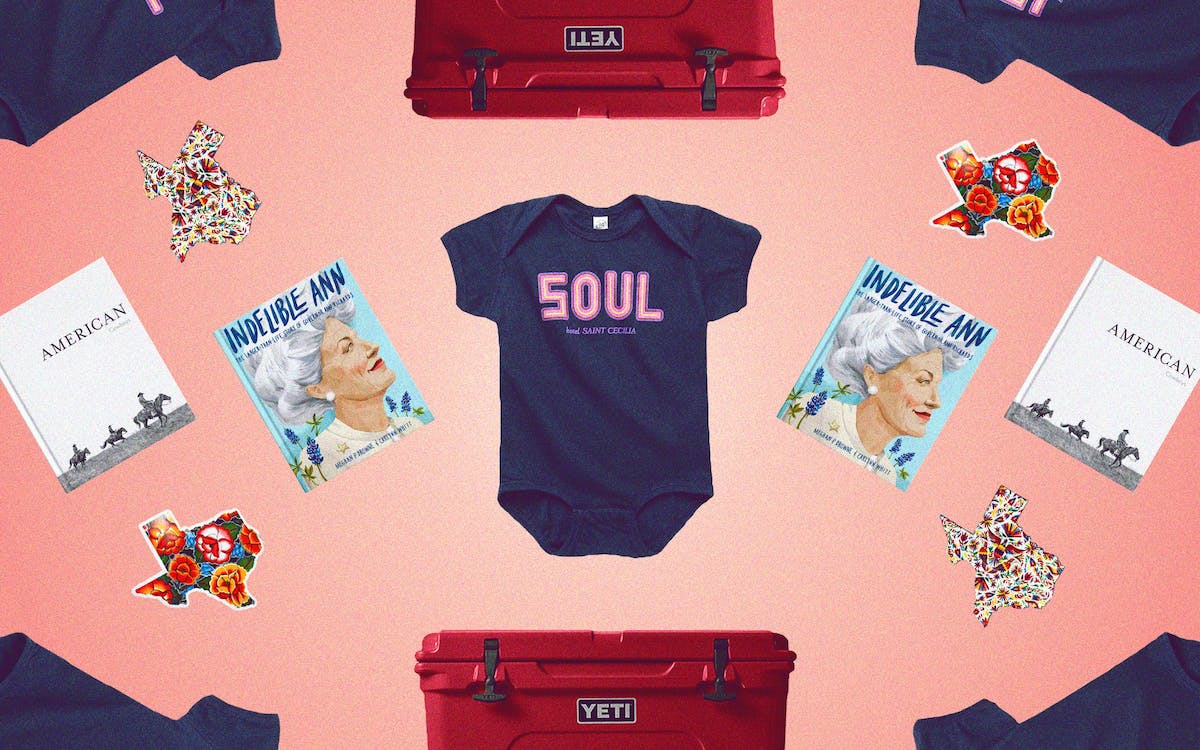 It’s never too early—or too late—to be a Texan. Here are a few ideas for both little ones and newcomers. (And, ahem, we’re assuming that you’ve already considered Texas Monthly‘s brand-new book on this very topic: Being Texan: Essays, Recipes, and Advice for the Lone Star Way of Life). You can find more Made in Texas gift ideas in our guides for the Entertainer, the Stressed-out, the Trendsetter, and the Stocking (gifts under $50).

As the executive chef at José, in Dallas, Anastacia Quiñones-Pittman is known for her contemporary Mexican cuisine. Texas Monthly taco editor José R. Ralat praises her “refreshing versatility” in the kitchen, a trait she also brings to her creative side project. On her Etsy shop, CieloDesignsCo, the chef offers a feast for the eyes—dozens of colorful stickers celebrating Latino culture and cuisine, from a “Keep Grinding” molcajete to luchadors. She also offers several kinds of Texas-shaped stickers featuring vibrant flora and fauna (and they’re waterproof, so stick away!).

This delightful picture-book biography traces the life of Dorothy Ann Willis from her childhood in Waco and San Diego to the halls of the Texas state capitol during her heady days as governor. Written by Austin native Meghan P. Browne and cleverly illustrated by Carlynn Whitt, this book captures Richards’s indomitable spirit. It’s sure to help inspire a new generation of female leaders.

Just a block around the corner from the “I Love You So Much” wall at Jo’s Coffee on South Congress, in Austin, is another much-Instagrammed symbol of the city: the neon “SOUL” sign by the pool at the ultra-chic Hotel Saint Cecilia, which, like Jo’s, was founded by Liz Lambert. (Cool fact: the hotelier bought the red porcelain letters from collaborator and neon artist Evan Voyles, who rescued them from a sign that spelled out “Louisiana” at an old casino.) Printed locally by Ramona Press, this all-cotton onesie comes in three sizes (six, twelve, and eighteen months). Perfect for the littlest cool kids.

French photographer Anouk Masson Krantz traveled alone across Texas and the rest of the country in her quest to capture the real, modern lives behind the cowboy mystique. The result is the stunning new American Cowboys, a book of portraits and other imagery certain to elevate any coffee table, as well as serve as a good primer for anyone new to the state. In the beautifully written forward, Texan Taylor Sheridan, creator of the popular Yellowstone television series, writes: “Cowboys do not look at their profession as a career: it is a lifestyle that coincidentally pays. It is self-reliance elevated to an art.”

Newcomers to Texas can be overwhelmed by the size of their new state. Yes, it’s bigger than France. Our advice? Tackle it city by city. An experiential gift company by the (possibly eyebrow-raising) name of Tinggly offers travel packages around the state, from “Horseback Through Houston” to a Dallas food and wine tour. The Take Off for Texas package, which comes via an e-voucher or a smart, eco-friendly gift box (for a $10 fee) lets a couple choose a two-night hotel stay at select hotels in Houston, San Antonio, Dallas, or Austin.

You haven’t experienced Texas until you’ve gone exploring outdoors, from camping in Big Bend National Park to lounging in front of your truck on the beach in Port Aransas. For almost any alfresco activity, especially in the summer, you’re gonna need a cooler. Many Texans swear by Austin-based Yeti, which is why we rejoiced when the outdoor-gear company added wheels to its popular-but-hard-to-lug-around Tundra Hard Cooler (those thick insulated sides are a little heavy). It’s pricier than most coolers, but it takes a beating and keeps those Lone Stars, Real Ales, and Karbachs nice and cold.