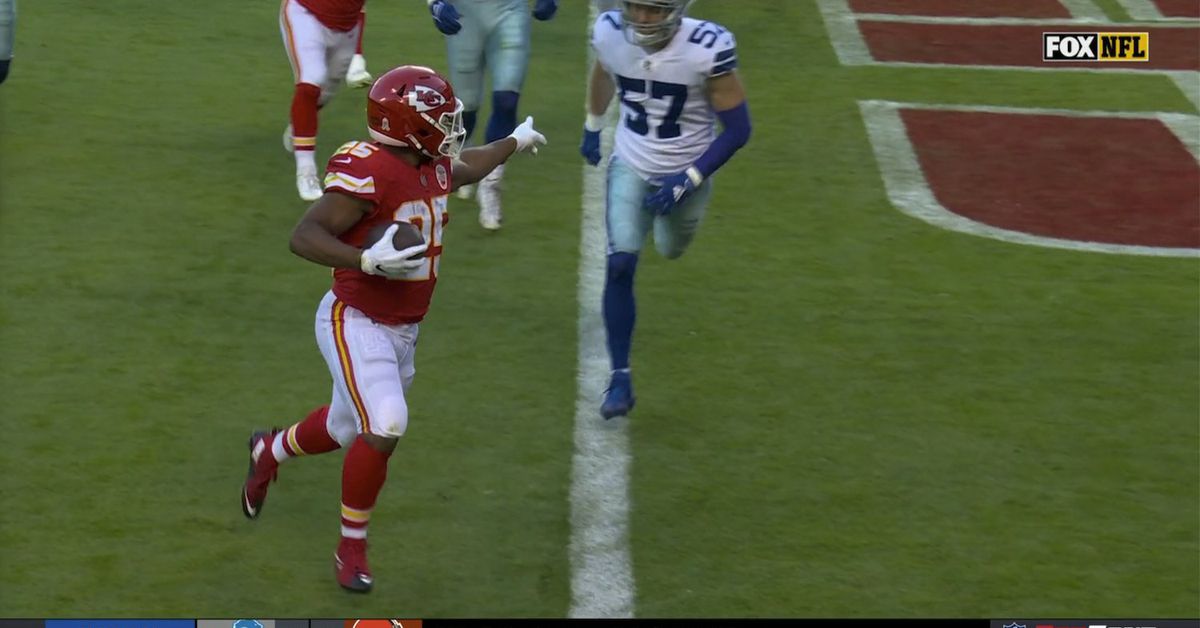 The NFL made it a point of emphasis to police taunting this year, and it’s been exactly as lame as we feared since the start of the season. We’ve seen soft taunting penalties almost every week. There was Jordan Akins drawing a 15-yard penalty for, uh, slightly spinning the ball. Levi Wallace got flagged for mildly celebrating a pass breakup. A Bears linebacker was called for taunting on a pivotal fourth quarter play because of his “posturing.”

While head coaches like Mike Tomlin and Matt Nagy continue to support the NFL’s enforcement of taunting, fans and players have been outspoken about how silly all of this is. It continues to be a talking point because pretty much every week there’s a new taunting call that seems totally unfair.

Clyde Edwards-Helaire was the unfortunate winner of the Weakest Taunting Call for Week 11. As the Kansas City Chiefs running back scored on an option pitch from Patrick Mahomes in the second quarter on Sunday, he pointed at Cowboys defender Luke Gifford. Yep, that’s a 15-yard penalty for taunting.

The point looks so mundane when you watch it in real time. You can probably find 100 examples of NFL players doing something similar over the last few years without getting flagged for it. This year, it’s a penalty almost every time.

NFL players: just keep your head down and show zero emotion playing this incredibly physically and emotionally demanding game. Do as much as raise a finger and that’s a 15-yard flag.

Edwards-Helaire said after the game he was just “showing my personality, being me and playing football.” That’s apparently against the rules.

The NFL gets mocked by media members and fans every time something like this happens.

Clyde Edwards-Helaire pointed a finger at a defender and got a flag for taunting.

There will always be inconsistencies in how taunting is called this year, especially because so many of the flags have been thrown during seemingly subtle moments. More than anything, seeing players immediately get penalized for doing something awesome on the field is just a total buzzkill.

Please, NFL, let your players have a little fun. It’s not going to hurt anyone, we promise.