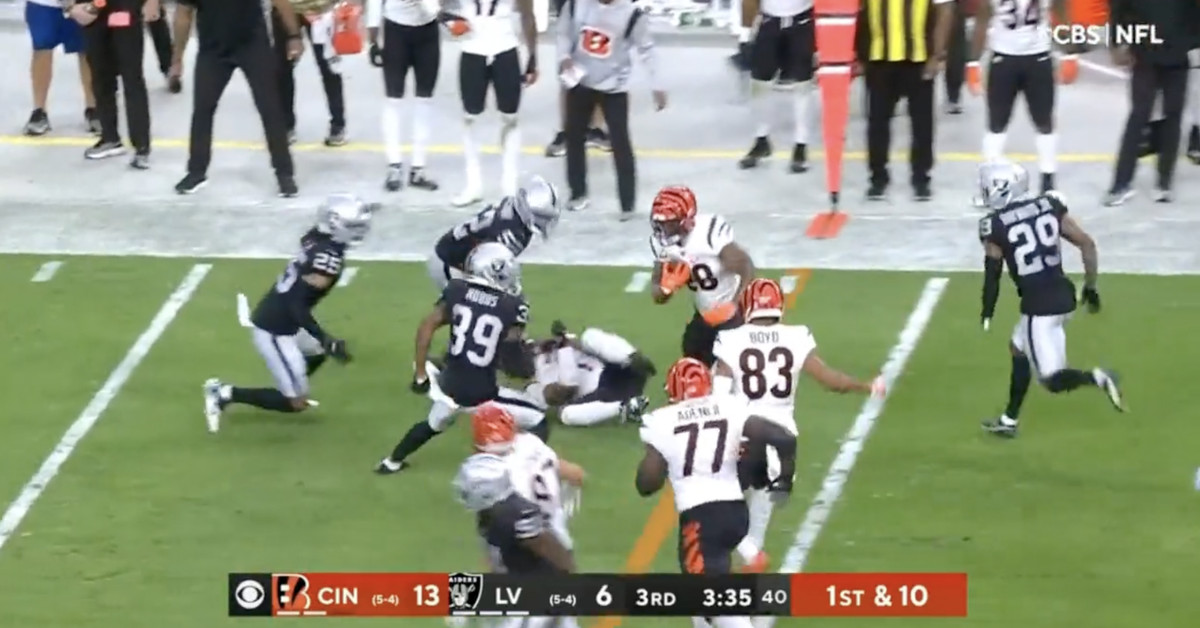 Joe Mixon has quietly been one of the NFL’s most productive running backs over the last few years. The Cincinnati Bengals RB finished with more than 1,100 yards rushing in 2018 and 2019 before being limited to only six games because of injuries last season. Mixon has resumed his role as the Bengals’ lead back this year, and he’s been a key piece in helping Cincinnati keep pace in a competitive AFC West.

Mixon was again the driving force behind the Bengals’ 32-13 win against the Las Vegas Raiders on Sunday in Week 11. The 25-year-old busted two touchdown runs and finished with 123 yards on the ground in the victory. Cincinnati improved to 6-4 to stay within striking distance of the Baltimore Ravens in the division.

Mixon is known for his ‘angry’ runs, and he had several of them against the Raiders. One of his toughest runs of the day had an unfortunately casualty: Bengals star rookie wide receiver Ja’Marr Chase. During a third quarter run, Mixon trucked his teammate while rushing for a first down.

With two more scores against the Raiders, Mixon has now found the end zone in seven straight games. That’s the longest streak in franchise history for a Bengals running back.

Chase also scored a touchdown on a six-yard pass from Joe Burrow in the fourth quarter. The No. 5 overall pick in the 2021 NFL Draft, Chase now has eight TDs on the year and is a front-runner for Rookie of the Year.

The Bengals remain in the mix in the AFC playoff picture thanks in to strong seasons from Mixon and Chase. Just don’t hurt each other, guys.