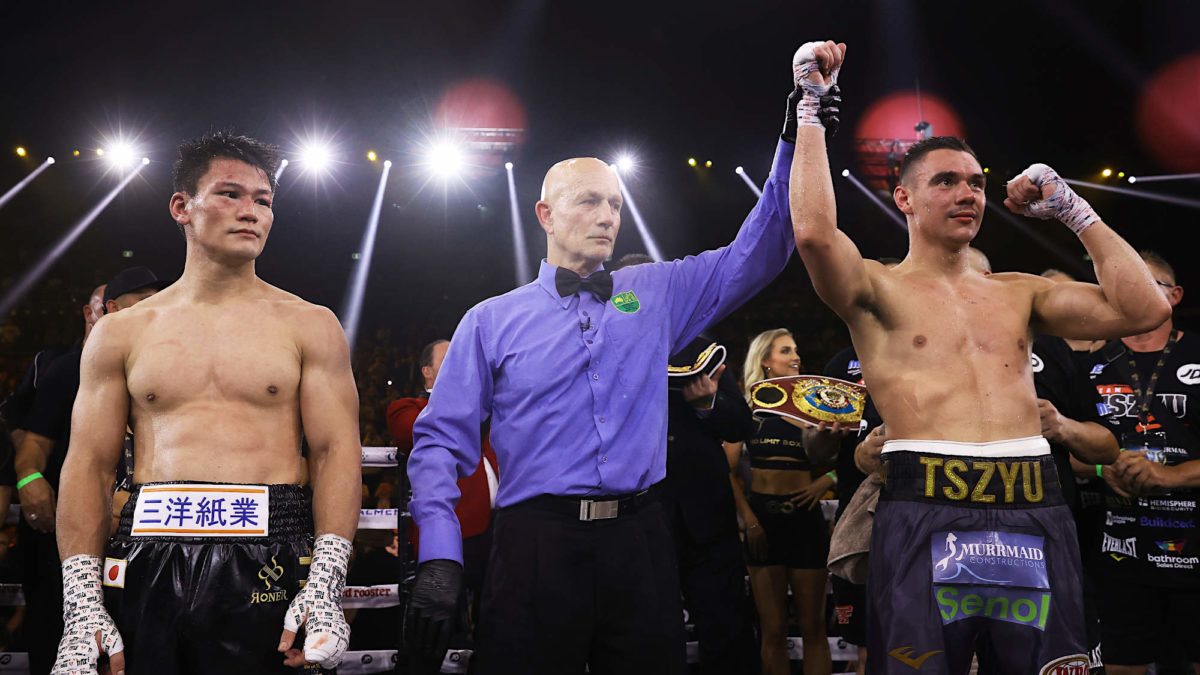 Looking unstoppable, Tim Tszyu has underlined his world-title credentials once more with a unanimous points victory over Takeshi Inoue in the pair’s high-stakes super-welterweight showdown in Sydney.

Rising to the occasion for his riskiest and sternest test yet, Tsyzu prevailed after 12 tough rounds to improve his undefeated professional record to a 20-0 – 15 by TKO.

All bets would have been off had the 27-year-old lost to Inoue.

But the 10,752 fans who packed out Qudos Bank Arena, including a who’s who of Sydney NRL stars, need not have worried.

Tszyu dominated from the get-go.

While he was unable to record a 16th knockout win against the Japanese warrior, Tszyu was never in doubt of getting the nod from the judges after leaving Inoue battered and blue.

“The guy is built like a brick wall. I hit him with everything and he wouldn’t go down. I don’t think a heavyweight could drop him. What a warrior,” Tszyu said.

“I heard him squeal like 20 times and he wouldn’t go down. I didn’t feel s***, I was just having a good time in all honesty.

“That was the best thing that could have happened, 12 rounds before the big time. I’ll be back in the gym, I need to take these guys out.”

And with a message to Brian Castano and all of the 154 pounders, he declared: “I’m coming for all of you. Every, single one of you.”

Tszyu’s manager Glenn Jennings will be in deep discussions with the sanctioning bodies, promoters and Castano’s camp to determine when – and where – that world-title blockbuster can take place.

A sticking point could be Castano’s potential rematch with Jermell Charlo after their controversial split draw in Texas in July which the Argentine was convinced he’d won.

Should that take place, and Castano wins, Tsyzu could be in line for a unified mega-fight for all four straps.

It would be nothing less than the Sydneysider deserves in his obsessive quest to follow in footsteps of his legendary fighting father Kostya and become a world champion.

Tszyu claimed before Wednesday night’s victory that he was “still a baby in this sport” when told that not even Kostya managed to win his first 20 professional fights.

But after taking down a succession of domestic rivals and now his first world-class international opponent in Inoue, Tszyu is fast growing into a boxing powerhouse worthy of a shot at the big boys of his division.

Living up to his fight-eve promise that he was “coming for his head”, Tszyu rocked Inoue in the opening round with a thunderous left to the forehead.

He won the second and third rounds with a series of damaging rights.

Tszyu upped the ante in the fifth, landing a flurry of savage uppercuts flush to Inoue’s head.

The tenacious Japanese – who also went the distance against Mexico’s undefeated WBO junior middleweight champion Jaime Munguia in his only previous defeat – showed remarkable courage to stay on his feet.

Inoue continued to cop a pounding and finally hit the canvas in the frenetic final round as both combatants probed for a knockout blow.