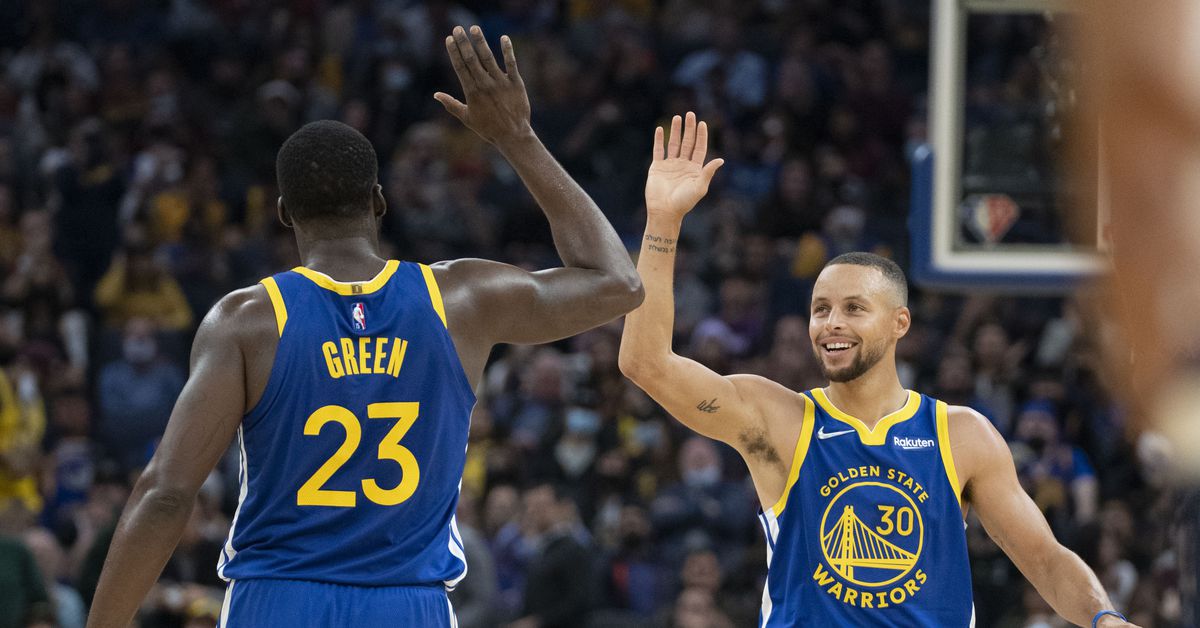 The Golden State Warriors were not supposed to return to championship form this early or this easily. Las Vegas oddsmakers had the Warriors pegged at 48.5 wins entering the season, a mark that tied them with the Dallas Mavericks for the seventh-highest projected total in the league. Even that seemed like an optimistic prediction for the team Golden State would begin the year with.

The last time we saw the Warriors, they were getting summarily dismissed from the inaugural play-in tournament by the Memphis Grizzlies. Stephen Curry had finished third in MVP voting and Draymond Green again earned All-Defensive First Team honors, but the Warriors were still objectively an average team. They placed No. 15 in net rating, boasting a top-five defense that was dragged down by the league’s No. 20 offense. Golden State didn’t hit its stride until it stopped playing its top rookie James Wiseman and settled on a more versatile, veteran lineup, but even that wasn’t good enough to get them in the playoffs.

If the Warriors were going to grow into one of the better teams in the Western Conference this season, it wasn’t supposed to happen right away. Klay Thompson was projected to be sidelined until Christmas after missing two full seasons with a torn ACL and torn Achilles. The Warriors had three lottery picks 20 years old or younger taking up valuable roster spots. The best version of Golden State always seemed to exist just beyond the trade deadline, when Thompson had his legs under him and the roster could be improved by cashing in some or all of those young pieces for another proven veteran.

Instead, the Warriors have been the best team in the NBA from the minute the season opened. Thompson still hasn’t played a game, and their big roster addition has been Gary Payton II, who beat out Avery Bradley to be the 15th man. If the best version of the Warriors really is still waiting to emerge for a more few months, it’s a terrifying thought for the rest of the league. Golden State looks menacing right now.

The Warriors had an opportunity to show how good they were in the present when they traveled to the East Coast to take on the Brooklyn Nets on Monday. The Nets were sitting at 10-4 and were beginning to look like the team pegged as the preseason championship favorites even without Kyrie Irving. If this was supposed to be a possible NBA Finals preview, the Nets better start looking for reinforcements. The Warriors blitzed them in the third quarter to run away with a 117-99 win that left no doubt which team looks like a championship contender and which one is still searching for answers.

Golden State is now a league-best 11-2 overall. They have the NBA’s No. 2 offense, and No. 2 defense. They’re lapping the field in net-rating. The eye test is even more convincing than the numbers: the Warriors look engaged, energized, and ruthless. This team is ferocious on both ends of the floor.

How has Golden State emerged into the Western Conference favorite even before Thompson comes back? Here’s a brief explanation.

Stephen Curry is still playing like he’s in his prime

Stephen Curry’s prime is supposed to be over by now. He’ll turn 34 years old before the playoffs start, around the team even the league’s all-time greats start to slip. Decline will have to be in the cards for Curry eventually, but it isn’t happening this season. There’s an argument to be made that Curry is still the very best player in the NBA.

Would you believe that Curry is on-pace to shatter his own single-season three-point record? It’s true.

When he set the all-time record of 402, he smashed his own previous record of 286.

Curry is taking 65.3 percent of his shots from three-point range — the highest mark of his career. He’s only shooting 38.3 percent on those attempts, which is the lowest mark of his career. Curry’s shooting percentages will probably tick up a little bit even with such an outrageous load of shots, which is a scary thought. While Curry remains the best shooter in world history, it’s often the little things he does that truly accentuates his impact on winning.

To watch the Warriors play this season is to see Curry constantly setting screens for his teammates. Curry routinely gets solid contact on his picks. The threat of him popping out for an open three always leaves a sliver of doubt in how the defense should defense the action. The result is plenty of open baskets for his teammates.

Great action from the Warriors to start the game. We know a post up usually means a post split, Warriors remix it with a little Triangle action. Curry cuts and goes right into a down screen for Looney. Look at where it’s set deep and look at where Looney catches it. pic.twitter.com/HiyX1nQWSQ

Curry currently leads the NBA in screen assists and screen assists points, which feels like a lame stat until the best shooter ever is the one leading the league. Curry also ranks top-15 among all-guards in deflections and top-20 in steals.

Meanwhile, he can still let it rip from the logo as easily as ever:

Curry is in impossibly great physical shape. His team in the halfcourt is spent sprinting around screens or setting them himself, and he rarely seems winded. He isn’t just the front-runner to win his third MVP right now, or merely the greatest shooter ever. He’s also a selfless teammate who does a lot of small things to help the Warriors gain an advantage.

The Warriors’ run of dominance has been defined by the long-range brilliance of the Splash Brothers on offense, but their defense has always been their backbone. Since 2013-2014, Golden State has finished with a top-five defense five times in eight seasons. They finished in the top-10 two other times.

Golden State’s defense is again elite this year. Warriors opponents attempt only 26.9 percent of their shots at the rim, the stingiest number in the league per Cleaning the Glass. Warriors opponents do take a lot of threes (40.1 percent of their attempts are from behind the arc, seventh most in the league), but they only hit 33.1 percent of those attempts. That may lead you to believe Golden State’s defense is getting a little bit of luck with opposing teams missing shots, but the reality is the Warriors are contesting every open look with quick rotations and disciplined closeouts.

Watch how Golden State’s defense moves in unison to fly all over the court on this possession against Chicago. Every defense knows where they are supposed to be — and if they hesitate for even a second, Green is pointing them to the spot.

NBA defenses have to get the job done as a team rather than relying on great individual pieces to combat the increased space offenses are working with due to the influx in shooting talent. No one defends as a team better than Golden State.

On this possession, Kevin Durant tries to come off a screen into a dribble handoff to get him driving into the middle of the floor. Green fights over the initial screen and helps break up the handoff between Durant and Blake Griffin. Kevon Looney then switches onto Durant while Green breaks up Griffin’s roll and stays square to KD. Durant might be the best scorer alive, but he has every Warrior keyed in on his drive while still being ready to recover to Brooklyn’s shooters. Ultimately, he can’t do anything against the length of Looney and Green .

Head coach Steve Kerr and ace assistant Ron Adams has never been afraid to experiment with new strategies. Against the Nets, they threw out a ‘triangle and 2’ defense that resulted in a Brooklyn shot clock violation.

The Warriors defense currently ranks No. 4 in the league in location effective field goal percentage, per Cleaning the Glass. They aren’t crazy lucky. This defense is just really good.

The Warriors’ veteran supporting cast is buying into their roles

Curry playing at an MVP level and Green remaining one of the best defenders alive isn’t exactly a new thing for the Warriors. The difference between this year’s apparent juggernaut and last year’s lottery team can be found in the veterans gluing together the rest of the roster.

The Warriors just keeping finding guys. Jordan Poole has grown into a microwave scorer who can create a bit off the dribble. Andrew Wiggins seems a lot less disappointing when he’s merely counted on to be a solid two-way wing. Looney lacks bounce as a big man, but he sets great screens and always knows where to be. Nemanja Bjelica has given the Warriors a 6’10 playmaker and aware defender. Otto Porter brings shooting to the offense and length to the defense. Payton II has legitimately been one of the league’s most impactful defenders. Andre Iguodala looks completely revitalized even if he still can’t shoot. Damion Lee adds some floor spacing. Juan Toscano-Anderson can be another solid two-way glue guy when he’s at his best.

None of this mentions Wiseman, Moses Moody, or Jonathan Kuminga. Kuminga — the No. 7 overall pick this past draft — has already been impressing as a small ball five lately. Wiseman is finally coming back soon, and he should have a much smaller role than last year. Did we mention Klay is now practicing in 5×5 runs?

The best version of the Warriors is still likely waiting in the not-so-distant future. They look like the best team in the NBA right now regardless. After wins against the Nets and surging Chicago Bulls, concerns about an easy schedule filled with home games should become less worrisome. This team looks all the way back. The whole league knows they’re only going to get better.