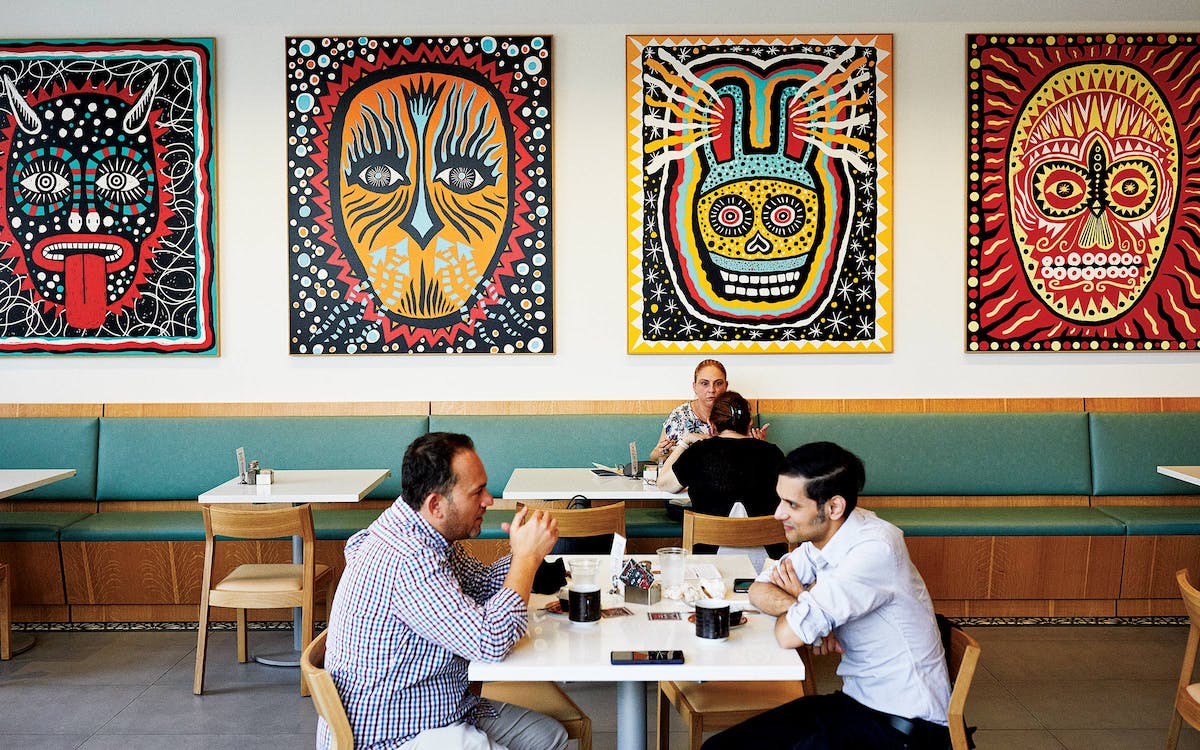 As soon as Urbe’s doors open, at 8 a.m., customers start streaming into the big, breezy room not far from Houston’s Galleria. Some are in a hurry; within minutes they’ve rushed back out with coffees and bags of breakfast tacos. Others make a beeline for the glass-fronted pastry cases, where they stand and stare, trying to decide between the carnival-colored pan dulce buns and the fat, pig-shaped cookies, rich with raw sugar and anise. Dawdlers like my two friends and me order espresso drinks from a mask-wearing clerk and wander over to one of the forty or so well-spaced tables. As I sip my latte, I can almost picture what’s going on behind the swinging doors on the far back wall, imagining a kitchen filled with cooks wrangling huevos rancheros and chunky, house-made chorizo. The day has just begun, and it won’t end until nine or ten at night.

Hugo Ortega, the best-known Mexican chef in Texas and winner of the 2017 James Beard Best Chef: Southwest award, has just opened his most personal restaurant to date. The latest in his collection of Houston dining venues (Hugo’s, Caracol, Xochi) that explore different parts of his home country’s complex culinary repertoire, Urbe—pronounced “ur-beh” and meaning “city”—celebrates the street food of Mexico, especially that of Mexico City, the megalopolis where Ortega and his family sold gelatinas and flan on the streets. Even as a young child, he had a role to play, helping with deliveries. “I was too short to reach the pedals of the bicycle from the seat,” he told me with a laugh when we talked recently, “so I hung off the side and pushed.” Selling food introduced him to the rough-and-tumble of commerce early on.

His love of good cooking came later, from spending time in his maternal grandmother’s kitchen after the family moved to the state of Puebla. These experiences also convinced him that family partnerships are best. He and his wife and business partner, Tracy Vaught, run their own company, and his brother Ruben serves as executive pastry chef for their restaurants. The newest addition to the family organization is Ortega and Vaught’s 24-year-old daughter, Sophia, a recent graduate of the University of Houston’s hospitality school. The group is rounded out by a mostly female leadership team that includes executive chef Paula Leguizamon, corporate chef Beatriz Martines, and general manager Adeline Chavez.

Meanwhile, back in twenty-first-century Houston, the room is beginning to fill up, so we get serious about ordering. I settle on chilaquiles gordos topped with two fried eggs. When it arrives, I’m pleased to find that Urbe has upgraded the yellow corn chips that are the classic dish’s usual centerpiece to square, ravioli-like pairs of blue corn chips filled with refried black beans and topped with a very tart green tomatillo sauce.

My friends split a mollete de aguacate—avocado toast. The soft bun, known as a telera, is spread with coarsely mashed black beans, guacamole, a fried egg, and enough crisp greens to make a small salad. After we finish, we just sit back, relax, and visit. Urbe is inviting, with bright, contemporary artwork on the walls, Mexican tiles edging the floor, and vintage industrial light fixtures. Besides, we have time before the stores open in the tony Uptown Park shopping village where the restaurant is located.

Top: A mosaic-tile mural on the restaurant’s exterior. Photograph by Jody Horton

The next evening, I ask three other friends to come with me to sample dinner (lunch and dinner menus are similar, but the evening offerings are more substantial). The tacos de pescado we start with are some of the best I’ve had in ages, the white fish—usually mahi-mahi or cod—crisply battered and sizzling hot from the fryer, dabbed with chipotle aioli, and topped with napa cabbage. We almost order the smoked half chicken but decide instead to share the barbacoa plate, a smoked and braised combo of beef cheek and chuck. The portion is generous, but the execution seems a work in progress, with not terribly flavorful meat and a one-dimensional russet-hued pasilla chile consommé for dipping. The best part of the platter? Fragrant tortillas, made from corn nixtamalized in-house. Then, just for fun, we get the whole roasted cauliflower, and it turns out to be everybody’s favorite, with drizzles of herbal epazote aioli and nutty pipián rojo. (It uncannily resembles a human brain, which should delight any children who happen to be with you.)

After two visits to Urbe, I realize I haven’t had a meal on the tall, covered breezeway yet. Luckily there are plenty of tables available on a Saturday morning, under strings of swaying lights. It’s brunch time, and my companions and I want a drink, so we try the fine house ’rita with passion fruit–agave nectar, which is an economical $11.50 (the $29 Greatest Margarita—made with Gran Centenario añejo tequila and 25-year-old Grand Marnier—will have to wait for another time). With no particular plan in mind, we start ordering. First up: a fantastic huarache, a long, flat masa cake layered with pork carnitas and strips of roasted poblano chile, topped by a squiggle of crema that pools delectably around the edges. Next come elotes—roasted ears of corn—which are soggy and coated with at least three times too much cotija cheese and tart-hot Tajín powder. But the camote—a whole, slow-roasted sweet potato topped with crunchy pumpkin-seed brittle and crema—is ridiculously good.

As a final indulgence, we pull out the stops and order a bunch of desserts, and that’s where we hit pay dirt. They’re not all equal—next time I would skip the rather stodgy empanadas. But the tres leches cake is exceptional, milky and spongy under a golden-brown toasted meringue cap, and the tarta rústica comes with crisp apples and a caramel-rich scoop of horchata-and-dulce-de-leche ice cream.

Walking out for the last time, I flash back to a conversation I had with Ortega almost ten years ago, about a trip he and Ruben had made to Mexico to gather recipes and ideas for a book and restaurant. They spent two weeks sampling the wares from markets and street vendors in five cities, finding themselves impressed and even dazzled by the cooking of everyday people. “The most traditional food you can put in your mouth is on the streets,” he told me then. “Those recipes have been passed down for generations.” The cookbook that grew out of the journey, Hugo Ortega’s Street Food of Mexico, was published in 2012. It took Ortega nearly a decade to launch his restaurant, but it’s here now and he is overjoyed. “Those bold flavors—that is my soul food.” He thinks it was worth the wait. So do I.

This article originally appeared in the December 2021 issue of Texas Monthly with the headline “A Family Affair.” Subscribe today.