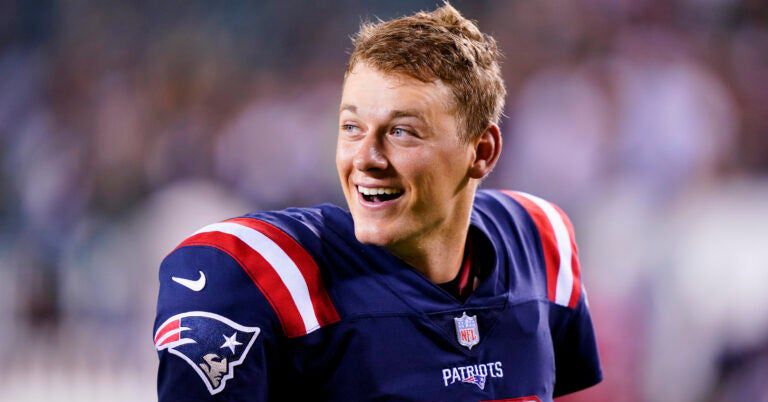 The New England Patriots look like they have their quarterback of the future. Rookie QB Mac Jones has been the talk of the NFL after leading New England to four straight wins.

Last Sunday, Jones’ had a remarkable performance that was eye-opening to many. The rookie managed to complete 19-of-23 passes for 198 yards and three touchdowns, his first three-TD game in the NFL, as his New England Patriots blew out the Cleveland Browns.

Jones’ early success has surprised many. He was the last of the five first round quarterbacks taken in the 2021 NFL Draft. He didn’t have a rocket arm like Zach Wilson, the polish of Trevor Lawrence, or the athleticism of Justin Fields. But he’s playing the best out of any rookie regardless after beating out Cam Newton for the starting job in camp.

No other rookie quarterback has finished a game with a passer rating over 100 all season. Jones has done it five times already.

The Kansas City Chiefs’ Tyrann Mathieu has noticed people flip-flop their opinions on him and call it out.

Mac Jones wasn’t trendy enough for y’all at first huh now y’all love him…. Man, y’all funny!!! Day in and day out!!! Y’all should be on Comedy Central

Jones currently has the Patriots in the playoff picture at 6-4. At this point, even his most ardent skeptics during the draft have to admit he’s been effective as a rookie QB.

Maybe NFL fans shouldn’t be so surprised. In his time at Alabama, he was a star on and off the field. He graduated in just three years with a degree in Communications, along with finishing with a 4.0 grade point average. The following school year, he continued to play at Alabama while completing a Master’s degree in Sports Management, and still managed to graduate with a perfect GPA.

Let’s not forget he was named a consensus All-American and was a finalist for the Heisman Trophy, in addition to earning the Davey O’Brien, Johnny Unitas Golden Arm, and Manning Awards.

He followed behind former starting quarterbacks, Jalen Hurts and Tua Tagovailoa. Last week, the Roll Tide trio were winners in the same week for the first time since they all went pro.

And if that doesn’t tell you how talented of a guy he is, did you know his first job was as a child model & actor?

Asked on @MerloniFauria about his first job, Mac Jones said he was a child model.

“There are a few commercials you can try and find.”

Of course, the internet found the pictures:

Jones talked to ESPN’s Kirk Herbstreit ahead of the draft about his child modeling career.

“My parents always wanted me to try stuff,” Jones shared. “They never really pushed me into sports, which is really cool. So I tried modeling [and] acting.”

Aside from being a charming kid star, Jones is definitely a jack of all trades. It won’t come as a surprise to see him as Rookie of The Year candidate, as he’s undoubtedly only getting better from here.