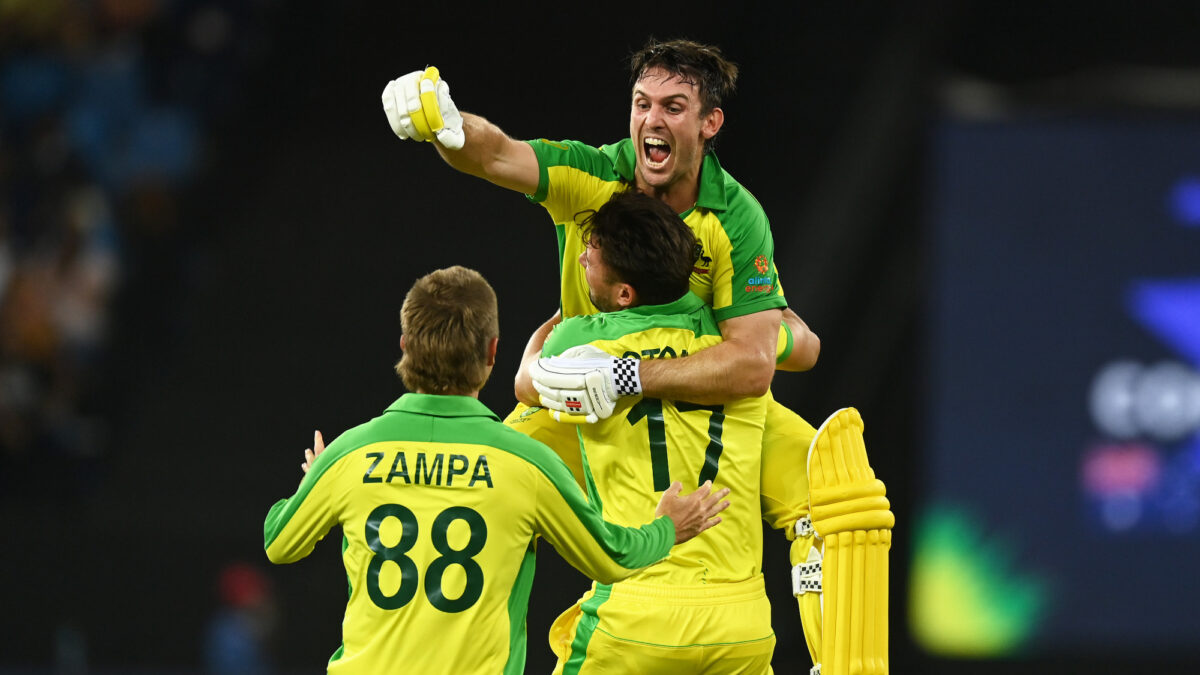 Australia’s chief cricket selector George Bailey says he is leaning a particular way when it comes to the contentious No.5 spot for the Ashes team, but won’t reveal his hand just yet.

Bailey announced Tuesday a 15-man squad for the first Ashes Test at the Gabba next month with the key talking points a battle for the middle order place between Usman Khawaja and Travis Head, no place for Mitch Marsh and call ups for Jhye Richardson and Michael Neser.

Bailey told a news conference that he didn’t want to lock in a No.5, but was happy to confirm Marcus Harris would open the batting alongside David Warner.

“I really want to encourage us to have a squad mentality full stop,” said Bailey.
.
But Bailey also said the selectors wanted to show loyalty to players after selecting them for Brisbane, meaning they would stick with players to give them an extended run in the team.

On the showdown between Khawaja and Head

“We’re starting to get pretty close to where we’re going to land on that,” Bailey said.

“We’re leaning towards one of them but the whole purpose of naming a squad is to have a squad there. So we’ll work through that much closer to the start of the first Test.”

The final decision will be made “the same way that we make any decision – around the runs they’ve been scoring, the form they’re in, the role that we expect them to play through the Test series.”

Bailey was asked outright to tell the media who was the frontrunner.

He smiled: “No, you’ll have nothing to write about tomorrow, then. I want to see where you guys land. Have a crack at it. It will make the Shield game a lot more exciting next week.”

Asked if Khawaja’s age could be a factor, Bailey replied: “That’s one of many, many factors. But I think for the here and now of trying to win this Ashes series it’s not particularly relevant.”

“I think T20 and Test cricket are about as far removed as you can get from a cricket format,” Bailey said.

“We’ve just got to be really careful about necessarily assuming that one will lead to the other.

“But what I said about Mitch the other day, and I’ll say it again, is just how thrilled we are for him to have had the World Cup that he did. And to finish with the game he did in the final was just superb and great reward for the way that he’s prepared himself for the last couple of series for Australia.

“I’m just so excited about his next number of years. Hopefully injury concerns behind him and just the age he is.

“I think we should be seeing the best of Mitchell Marsh for the coming years and I’m really excited about what he can produce. We know he can play at the Test level so I’m excited that hopefully some of those performances will be in all three formats.”

On concern over bowlers’ readiness and fitness after T20 WC

“There’s not [concern], barring making sure that they’re ready for it,” Bailey said.

“The boys got back to the Gold Coast only recently so we’ll take stock there and see how they pulled up from that.

“There’s a really clear process for how they’re going to build up for this Ashes series. It’s not the first time that they’ve gone into a Test series with a less than ideal preparation or without any red ball cricket behind them. So it’s not new to them.

“They’re professionals, they’ll work through it and we’re expecting them all to be to be raring to go.

“There’s obviously enough data and analytics around which bowlers perform well at certain grounds and how they will match up together. There’s a whole raft of things that come into that. But first and foremost, it’s really about the preparation for those guys.

“Fast bowling is so physically challenging and there’s so many different factors that come into what you’re trying to put together when you put a bowling group together.

“It only takes one or two things to shift, and then it can have a bit of a flow on effect to how everything else looks as well.”

He said he was not trying to be coy around the bowling lineup but said there were many factors to consider.

“Given that the boys have just got back from the World Cup, they’re in quarantine, I don’t think they’ve even had a training session yet, so in terms of just taking stock and letting them build up over the next couple of weeks, it’s going to be really important,” Bailey said.

“I really like Marcus Harris, he’s done everything that we’re asking in terms of scoring a mountain of domestic runs, he’s gone away, had a really good strong winter playing for Leicester as well,” Bailey said.

“So he just continues to do all the right things domestically. I’ll back up what I said the other day – we’d love nothing more than being able to back him in and give him an extended run up at the top of the order.

“We know how important opening partnerships are trying to find someone to forge a really strong relationship with David at the top is really important for our Test team.”

On the emergence of Jhye Richardson

“Getting excited by Jhye,” Bailey said. “Physically he looks as strong as I’ve ever seen him.

“I like the fact he’s had a couple of niggles yet he’s worked his way back from those so he’s starting to build some resilience into his body, which is still a young body.

“He’s worked his way into the last three Shield games quite nicely but one particular spell, I think it was the morning of day two at the Gabba, was a really impressive spell. He ended up getting the wickets of Marnus and Joe Burns, who both commented that it was impressive quality.”

On the progress of injured skipper Tim Paine

Paine just needs to “get some cricket under his belt, which we’re really confident he’s going to get,” said Bailey.

“I think they’ve actually had to hold him back a little bit in the last couple of weeks to make sure the actual healing process has gone well, and now it’s just a matter of actually getting some game time under his belt. So he’s really confident and really excited to be leading the team come the first day at the Gabba.”

Bailey was asked if the Victorian opener could play any part in the Ashes.

“He hasn’t played any cricket up until this point. It’s a really big step to process for him.

“It’s about getting symptom free and feeling good physically. And then secondly, it’s about just putting together a batch of games.

“I think if you look back over his last couple of years, it’s been really hard for him to get that body of work together. My chats with him, is first and foremost, get yourself right and look after yourself.

“You’ve got to have a bit of body of work to know that he was up for it. I’m not discounting the fact of how talented he is.”

On the pick and stick selection mentality

Bailey said he would love to think that the selectors could stick firm and give players an extended opportunity.

“I think once you’ve made those decisions, it’s important to give guys an opportunity,” said Bailey.

“We know that Test cricket is hard. And if you’re riding each and every innings then I think A: it puts the players under enormous pressure and B: that’s just the yin and yang of the game.

“One of the other reasons for naming to the end of Adelaide is there’s a little bit of uncertainty still around what the summer is going to look like and one of the things we learned from last year was wherever possible if we can provide players the opportunity to to get back and play some cricket rather than just being part of the squad and not playing at all, that’s important for them.”