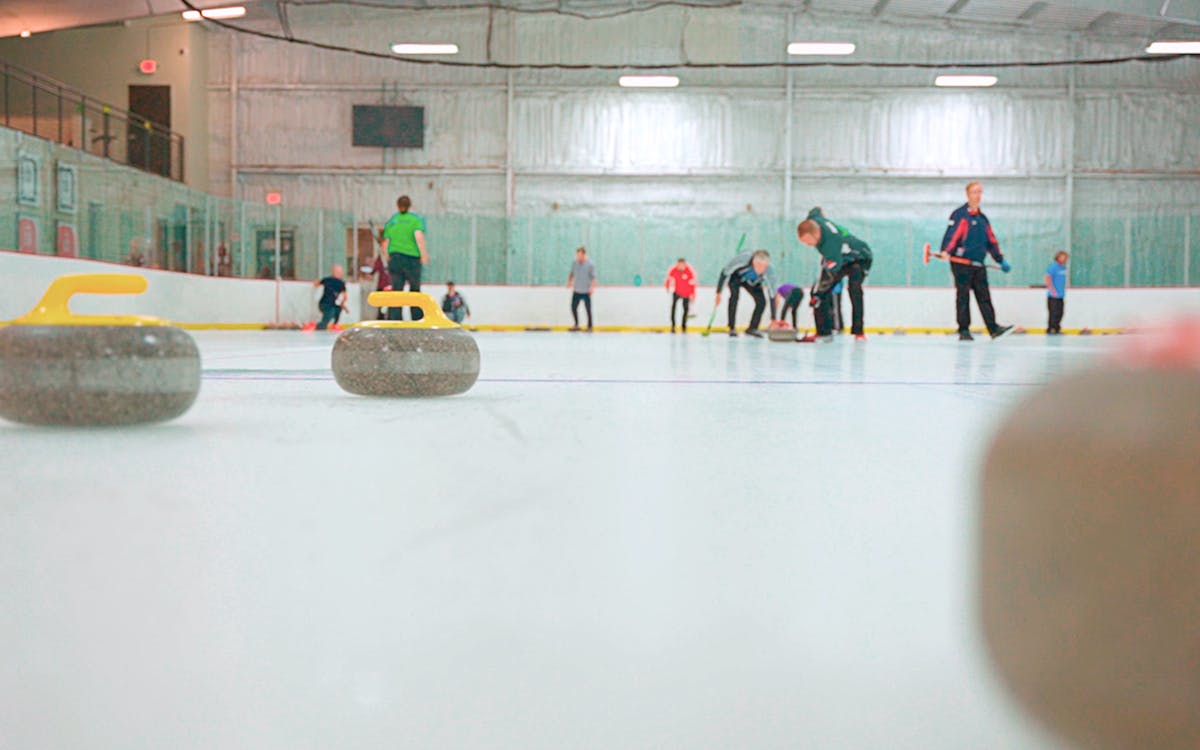 A prediction: four months from now, when it is really, really not summer anymore in Texas and you have probably forgotten you ever read this, you’ll find yourself watching the Winter Olympics on TV with a faint glimmer of recognition. There’ll be folks in what look like golf pants or pricey athleisure outfits sliding around and pushing a stone across a sheet of ice, and other folks chasing the stone with brooms. Curling, you’ll remember. And then maybe you’ll think, That doesn’t look so hard. Or better yet, you’ll think, What must that be like?

That is precisely what they’re counting on at Curl Austin, which opened in September and is now the first dedicated curling ice in the state of Texas. Backed by private investors in partnership with a local nonprofit curling club, this new facility is a bet that the country is about to get serious about curling, and that Austin, of all places, is where it’s going to start.

For the first time ever, Texans in the Austin area will be able to idly Google “curling” one day, and discover a pristine sheet of ice and a set of stones just waiting nearby. And, crucially, a brewery next door where converts to the sport can retire to strategize for the next game.

The “why now?” is easy. Over the last decade, U.S. interest in curling has been on an incline, with curling clubs opening in new cities all over the country. And in February, Team USA will head to Beijing to defend its improbable gold medal win, when the men’s team shocked the world by beating Canada and Sweden. As broadcasters at the next Olympics are sure to remind you, the win was a thrilling and inspirational moment, a Cinderella story starring a crew of semi-retired curlers who called themselves the “team of rejects”—some had been cut from the national program a couple years earlier—who upset the best teams in the world. It was a real American underdog tale, a moment of national triumph, the “miracurl on ice.” (The Olympic trials to determine which teams of curlers will represent the United States in Beijing began Friday in Omaha, Nebraska, with the finals slated for this weekend.)

If all that isn’t quite top of mind anymore, you’ve hit on the biggest challenge for folks who want to grow the sport. Like interest in skeleton and Nordic combined, curling fandom operates on a four-year cycle: a spike each Winter Olympics followed by 47 months of slow forgetting. Unlike those other sports, though, curling won’t make you fear for your life if you give it a whirl the next time you remember it exists. So, in theory, curling should be easily accessible to new fans. You just need ice.

“The dream was to have dedicated curling ice,” says Lone Star Curling Club president Joe Glaeser, who has been with the club since 2010. “But it’s hard when you can’t get enough dedicated ice to support it. And you can’t build the membership without the ice. It’s kind of a catch-22.”

Until now, if you curled in Texas, you probably did it on ice that had just been hacked to bits by skaters and hockey players. Those conditions are somewhat less than ideal in a sport that requires charting a precise path across a long, smooth surface. Imagine playing four quarters on a football field and then trying to golf.

Curl Austin will allow first-time curlers in Texas to play the game the way they see it played at the Olympics. When you get out there and wonder why your stones are forever listing to the left, you can’t blame the ice—it really is harder than it looks on TV. Like Kevin Costner plowing his corn to build a ball field, the folks running Curl Austin are betting that if you prepare the ice to the proper specifications, people will come.

The “why Austin?” is harder to answer. The sport of curling has been a convenient foil for both U.S. senators from Texas. First for Ted Cruz, who joked that he would rather watch a “Canadian curling contest” than Barack Obama’s final State of the Union. And for then John Cornyn, who tweeted during the 2018 Olympics that “Curling has to be the most obscure Olympic sport. What is the point?” (To ask “what is the point” of a sport with a twelve-foot bullseye at each end of the ice suggests the question was asked in bad faith.) In both cases, the senators seemed to be arguing that curling is a particularly inconsequential and un-Texan kind of game.

But in fact, at the level of play accessible to them, Glaeser says, “​​the Texas teams have been dominating.” At the U.S. Arena National Championships—open to teams that play on non-dedicated ice—the last women’s title and the last three men’s titles have all gone to teams from Dallas–Fort Worth or Houston.

The Curling Club of Houston has been in action since 1973, the Dallas/Fort Worth Curling Club formed in 2002, and in Austin, the Lone Star Curling Club has been organizing curlers and leasing time at rinks around the city since 2006. The club partners now with Curl Austin, which is owned by a pair of business owners from northern Michigan. They’d been looking for a foothold to expand into new territory and became convinced Austin was the place to start.

Glaeser told me a member of his club had been on a trip to northern Michigan and happened to stop in at a new private curling club and meet the owner, who was thinking of branching out beyond the sport’s historical turf—particularly into the South. That connection was the start of a partnership between David Gersenson, who created Curl Austin and helped sort out a full-time lease, and the curlers in Austin who needed that ice.

Glaeser is 56 and grew up in Cleveland, not far from a local curling club. But he only found the sport decades later, in Austin. The story is not exactly Billy Crystal’s first look at Yankee Stadium. Glaeser’s memory: “I was bored one day and Googled curling.”

But he says that’s how most of the club members have found the sport. “We’ve grown it mostly with Texans and people with no previous relationship with it,” he says.

Curling is about as far as you can get from roller derby, but it has some very Austin elements. Over a couple of visits, just about everyone I talked to said they worked in the tech industry. It’s an analytical sport whose diehards tend to be proudly and enthusiastically nerdy. Greg Pontejos, a curler I met after league play one night, told me he’d first come to the rink on a lark. “I thought, wouldn’t it be hilarious if we went curling,” he said. That was a year ago. “I train jiu-jitsu and I do this—a lot of problem-solving hobbies.”

Curling is also traditionally a beer-drinker’s sport, which leaves Curl Austin nicely situated next door to Austin Beerworks, and surrounded by the wealth of breweries in the warehouses east of MoPac near Austin FC’s Q2 Stadium. It’s easy to imagine one of those bike-and-beer pedal trolleys pulling up and setting loose a bachelor or bachelorette party on the ice. When the space isn’t reserved for league play, Curl Austin is available for private or corporate events. (With name tags on, it’ll be easy to remember exactly who made the dumb joke about icebreakers.)

A sign on the door says Curl Austin has applied for its own license to sell beer and wine. That will aid in executing one of the sport’s most closely held traditions, “broomstacking,” in which two teams gather after a match to drink and the winning team buys the losers the first round. (It’s BYOB in there for now.)

When I went in October, Tuesdays were the most serious night of league play at Curl Austin. There were about thirty people on the ice, curling on four lanes, a mix of men and women and one boy bravely sliding around the ice in a T-shirt and shorts. The age range must have spanned at least fifty years.

“It’s an athletic sport but it’s not exclusively a young man’s game,” Glaeser had told me. “You can do it across generations. I’ve curled and gone to tournaments with my daughter. That’s not something you can do with practically any other sport.”

It was still hot and humid outside, but most of the curlers wore layers. The scene was a classic Texas winter fashion menagerie, featuring knit hats, fleece performance hoodies, and pajama pants. A few people wore jackets or jerseys with last names printed on the back.

It seemed impressive that nobody’s stones ever drifted into the next lane over—imagine bowling on four lanes without gutters between them—but everyone seemed to play at their own pace. Some sweepers followed the stones across the ice briskly, huddled in tight formation and taking precise little steps that matched the quick sweeps of their brooms. Other players followed stones with an upright posture and a slightly accelerated gait, like they were showing their stones at a dog show. At least one guy took his shots using a stick with a handle that let him curl the stone without having to bend down and slide along the ice.

It was easy to tell when a shot landed well—the twelve-foot targets are even harder to miss in person—but it wasn’t always clear why. Was it the person who shot the stone, the teammates who swept in front of it, or the player at the far end of the ice yelling things like “Sweep!,” “Yes!,” and “HOOOOOOO!”? It all seemed a little confusing, and like a lot of fun.

The way to find out what makes a good shot is at the venue’s weekend learn-to-curl classes. I went with my wife one Saturday evening in October, a couple of folks in our thirties with just a little winter-sport experience and a pair of surgically repaired knees between us. Some wise words from a curling old-timer stuck in my head as we walked in: “It’s okay to fall down, as long as you fall on your butt or something.”

Darin Henley, a Lone Star Curling Club officer, led our group as we ventured gingerly across the ice with the stones for the first time. The shooting motion felt incredibly awkward at first—what looks sleek and simple for an Olympic curler is actually a carefully timed sequence of separate motions, and most of my initial shots began with me leading with the wrong leg and then tipping over.

Throw after throw, I kept getting crossed up—I’d visualize a smooth shooting motion, then stick the wrong foot forward at the last second. But after about five clumsy throws, something clicked. The shooting motion started to feel natural, and some of the stones I threw actually stopped near the target, which I now knew was called the “house.” Though it felt longer, it had taken probably twenty minutes to get the hang of it.

And then, a great moment: I pushed off with my foot, led with the correct knee, and watched my stone glide across the ice, its yellow handle rotating slowly in a manner that looked about right, until I heard the loud clap of granite on granite. The college kid throwing the red-handled stones in my lane had parked one perfectly in the house, and now my stone sent it trickling weakly away from the target. This was every bit as satisfying as it looked on TV.