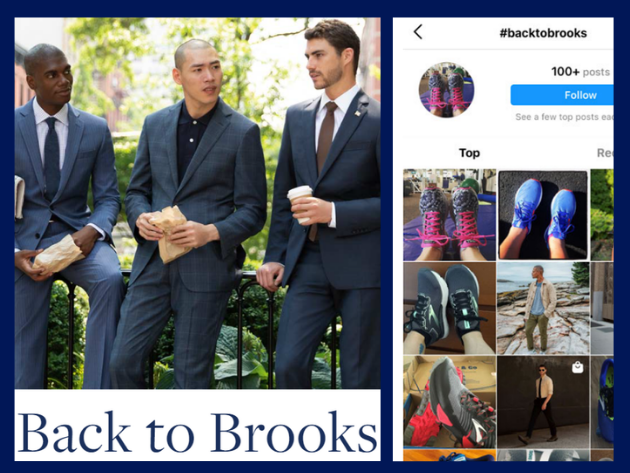 Brooks Sports, the Seattle-based athletic footwear and apparel company, is escalating its legal battle against Brooks Brothers by challenging the menswear maker’s recent “Back to Brooks” social media and marketing campaign.

In an updated complaint, filed Nov. 2 in federal court in Seattle, Brooks Sports claims that Brooks Brothers’ use of the standalone word “Brooks” in the campaign was unauthorized, confusing and deceptive.

Brooks Sports, which also goes by the name Brooks Running, says it was unsuccessful in its attempts to get the companies behind the Brooks Brothers brand to stop using the slogan and the #backtobrooks hashtag before the campaign expired.

The dispute centers on conflicting interpretations of a 1980 agreement between the companies that described the terms under which each could use variations of the “Brooks” trademark.

In an answer and countersuit filed in April of this year, the new Brooks Brothers owners denied Brooks Sports’ allegations, called the claims meritless, and said it was actually Brooks Sports that was in violation of the 1980 agreement through some of its own trademark applications.

Brooks Sports, which is part of Warren Buffett’s Berkshire Hathaway, alleges in its updated complaint that the “Back to Brooks” campaign is part of a broader scheme that also includes a move by Brooks Brothers into athletic apparel and shoes, as alleged in previous versions of its suit.

“Defendants’ acts are willful, and are committed with the deliberate intent to trade on the goodwill of the Brooks Marks, cause confusion and deception in the marketplace, and divert potential sales of Brooks’ goods and services to Defendants,” Brooks Sports says in the lawsuit.

Brooks Brothers’ owners have until Dec. 2 to respond in court to the latest Brooks Sports complaint.