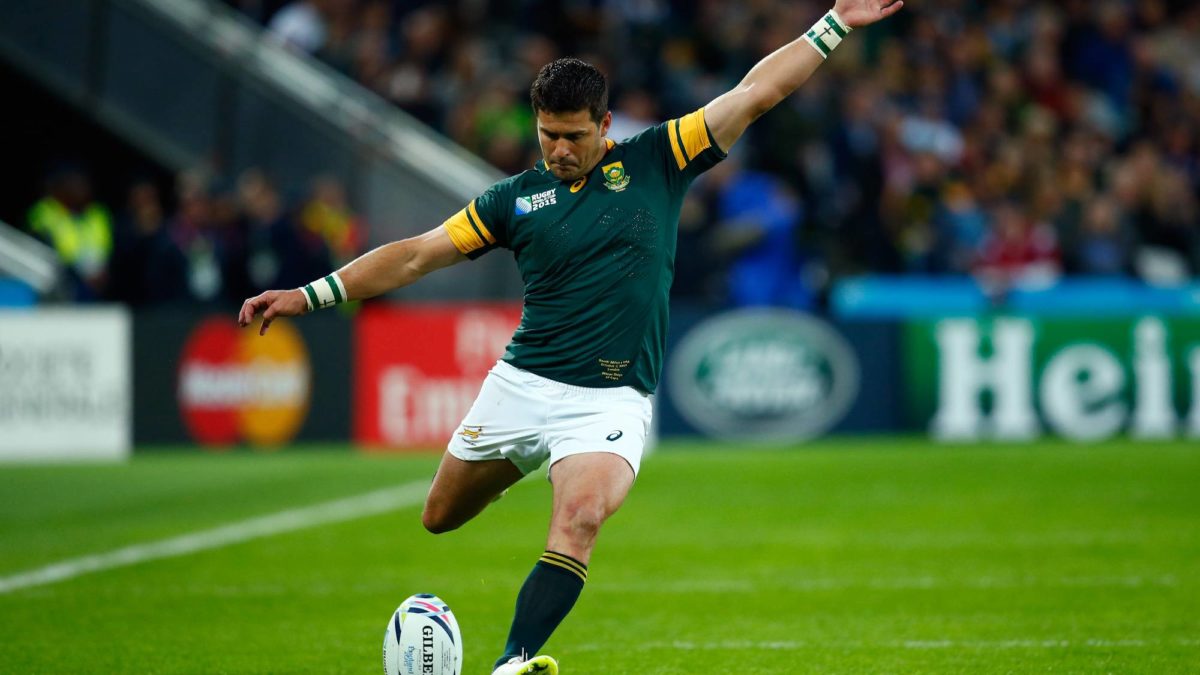 The coaches of the five teams who can win the 2023 Rugby World Cup were intensely focused this past weekend.

You could see it in their sweaty eyes. You could hear it in their press conferences: the theories, the hypotheses, the players being marked off (Kurtley Beale, Matt Scott) the roster for France, and the longing for certainty, for control, for a rationale to use to satiate their fandoms, or stave off the axe.

Gregor Townsend was the biggest loser on the weekend. He dropped Hamish Watson to the bench because he is too small to play against the Boks, but the Boks are tiny nowadays.

Toonie was the attack coach for the British & Irish Lions, which is like saying Donald Trump was the leader of the party of family values for a while.

So, he had a Lions-dominated attack stocked to go against two Jantjies and a Willie: a spine of generational talent (Hogg-Finn-Price) at playmaker positions, with big Lion brutes at outside centre and left wing.

It was a perfect setup. Scotland have drawn the reigning world champions and Ireland in their pool in 2023. Surely, Toonie and Tandy had scouted every single Bok tactic ad infinitum. (There’s only one: dominate).

But even with Herschel Jantjies stumbling around like Ross ‘Crab’ Cronje in the Coetzee years, Willie le Roux continuing his painful cameo as Zane ‘Sideshow’ Kirchner, and having all the algorithms and experience and ‘I told you so, Warren,’ at his disposal, Toonie came up empty, again.

With their Celtic cousins (did the Picts invade Eire or vice versa, I forget?) looking like they are the only team in world rugby with two front rows to match South Africa, Scotland is probably wondering if they can qualify for the quarterfinals at all. The firm of Hogg, Russell & Price will be two years older, a step slower, and none the wiser.

A 15-30 loss at home is a rude awakening, particularly because it was lost in almost precisely the same way England lost the 2019 final. Play well in the first half by surviving set piece wobbles, but then get suffocated and tapped out, as a bomb squad causes implosion.

It also demonstrates why Gatland played the Welsh way against the Boks instead of the Scottish way: it works better. Russell looked good in the third Lions test, but he didn’t creat tries. This weekend, he looked good, but could not make kicks, was caught out in defence, and did not look like taking the game over in the barren second half. If he had started all three tests in South Africa, the Lions might have been whitewashed.

But this series is also a chance to test new players. Scotland’s left field picks did not work.

The guy who played ahead of Hamish: I can’t remember his name.

Rufus McClean showed Makazole Mapimpi the outside for try one. Matt Scott waved Damian de Allende around him for the second. And a “bench” of Marx, Koch, Kitshoff, de Jager, Pollard, and Steyn ran on to finish it off.

With the best talent and the most Lions they have ever had, and the best defence in the Six Nations, Scotland cannot and will not win the 2023 trophy.

South Africa’s coaching squad, led by infamous rugby rogue Batman Rassie and his mad scientist Jacques ‘Robin’ Nienaber, will have wanted to see better from their aging fox at 15, but le Roux just might hang on, because he still sees space better on attack than the Bok 10s. But if we are going to have an old fullback, give me the effervescent full Frans Steyn, with his monster boot and impervious body. The truth is Aphelele Fassi should be in the mix, Warrick Gelant is setting the North alight, and Cheslin Kolbe could take over 15 in a second, and be a Leigh Fullpenny.

The Boks are a shout for France in 2023. Eben Etzebeth just keeps getting better, Mapimpi keeps learning how to play with the brilliant Lukhanyo Am and de Allende combination, there are now three test-quality front rows, and Cobus Reinach looks the business. The holes to fill, are fillable: Evan Roos from Western Province is a Duane Vermeulen clone, with Buthelezi of the Sharks also a possibility. South Africa have a youngish 10 in Pollard who could be a semi finalist, finalist and finalist in three Cups (that’s what you want). A third scrum half is readily available.

The only problem could be an early peak. But certainly they would fancy their chances of making the familiar quarterfinals and if they drew New Zealand again, have decent odds of surviving (unless the All Blacks can drastically upgrade their tight five with 4-5 good uns).

Against Ireland, the world’s best 2021 team (thus far) struggled to maintain possession in the right territories, and did not have good luck possessing territory.

Jordie Barrett was the only All Black back to gain from this game. He just seems to get better and better. Will Jordan is a classic pickoff artist, who can weave like a basket maker in the remote Peru highlands: he needs nothing at all to do it.

Dalton Papalii is the goods at 6, as our Rugby Tragic has been saying for many years, but the rest of the pack looked a bit tired and lonely. The bench was insipid.

But of course, New Zealand can win the 2023 Rugby World Cup. They are the favourites in every match they ever play, except perhaps if they played the Boks in South Africa next month.

So, we have potential Cup winners in South Africa and New Zealand. Scotland is eliminated. Can Ireland dream?

Yes, but they need better young halves. Jonny Sexton, along with James Ryan, Caelan Doris, Hugo Keenan, and Peter O’Mahony had a big point to prove this weekend: they were better in the really big games than the Lions picked over them.

But Sexton is fighting with Father Time and the World Cup is primarily a tourney of attrition where you have to get maximal quality from your spine.

Beyond that, the Irish show good depth at front row, where they have the only corps that can go toe to toe with the Boks. Andrew Porter and Tadgh Furlong, with Ronan Kelleher: that’s a foundation. Andrew Conway, Garry Ringrose, and James Lowe, with Robbie Henshaw coming back, form a clever backline.

The only thing keeping me from saying Ireland can win is I don’t think old Sexton can get to a final, and I don’t think Jamison Gibson-Park is a Cup winning 9.

It won’t be with Beale, who looked frenetic in the bad way.

But Andrew Kellaway is a great find, and even if Hunter Paisami is no Samu Kerevi, and won’t be, he and Len Ikitau show starch in defence: good squad men.

Nic White can lift the Cup, if he has the right 10, who has been identified.

James O’Connor is one of the Wallaby greats, and so brave, but he might have lost his fire. He is the very opposite of Beale, in the wrong way, too. Too calm.

This Wallaby pack is a proper pack. The locks look like locks. The bruisers are bruising.

What is lacking? Discipline, depth, Kerevi, QC, a fullback, and Koroibete.

Yes, their depth is remarkable. Freddie Steward is an obvious test animal. Poised. A rock under the high ball. Henry Slade, Manu Tuilagi, and Owen Farrell just play any position they want, but seamlessly.

Jonny May may make errors on defence at times, but he’s not going to let you down in a tournament. He learns.

The pack led by storming Jamie George is definitely going to get the Poms into the semis.

I do think Alex Dombrandt is the 8 they need, but Eddie seems unsure. Tom Curry is not an 8.

So, if have sure semi-finalists England, South Africa, and New Zealand, and a strong outside candidate Australia, who is the fifth team who can win?

Ireland or Wales or Argentina?

The Pumas are five times better than Italy, but not better than Ireland or Australia. Wales can win Six Nations but the core of their team seems to decaying from the inside.

Notice I haven’t mentioned France, yet. Mark it down: France will not make the semifinals in France in 2023.

France is the new Ireland.

They don’t know how to win close matches, they are too dominated by Antoine Dupont. They aren’t fit enough when it matters, and it would simply violate ancient rugby codes, deeper than laws, for them to rule the rugby world.

And so, I will designate these five teams as potential Cup winners:

Likely one of these two:

But maybe (if they dodge SA):

And possibly (if OZ can draw SA instead of NZ; and if Ireland can finally win a QF):